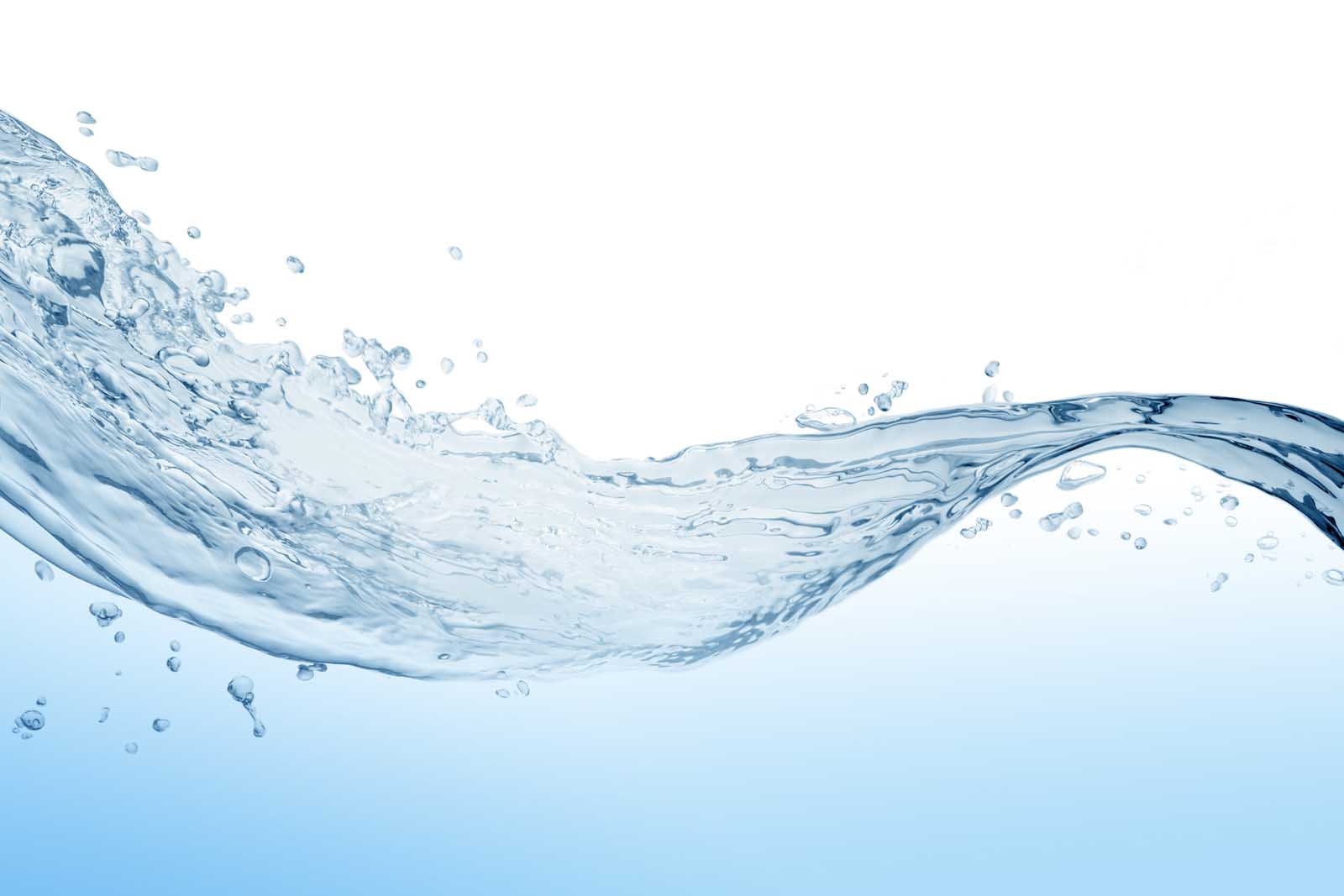 There is widespread consensus that bank regulations should be suited to the size and complexity of an institution. To further that objective, the Fed has indicated that it is reconsidering whether large banks that are not “Global Systemically Important Banks” (GSIBs) should be required to satisfy the full liquidity coverage ratio (LCR) requirement as opposed to the modified LCR required of medium-sized banks.  We use two methods – systemic risk scores and hierarchical cluster analysis – to determine which version of the LCR is the better fit for three U.S. banks that hold over $250 billion (and therefore are currently ineligible for the modified LCR) but are not GSIBs.  Our results show that the complexity of the large non-GSIBs is similar to that of the medium-sized banks, not the GSIBs, indicating that they should be subject to the modified LCR, not the full LCR.

Large commercial banks and bank holding companies are required by the federal banking agencies to meet the liquidity coverage ratio (LCR).  The LCR comes in two forms:  The original LCR requires a bank holding company with more than $250 billion in assets or more than $10 billion in foreign exposures to hold “high-quality liquid assets” (HQLA) in an amount at least equal to the bank’s projected net cash outflows over 30 days of severe idiosyncratic and market stress.  The modified LCR requires a bank with between $50 billion and $250 billion in assets and less than $10 billion in foreign exposures to maintain HQLA equal to 70 percent of its projected 30-day net cash outflow under the same stress scenario.

The Fed originally proposed that the modified LCR be calculated based on a 21-day stress projection. In its proposal, the Fed stated its rationale:

These companies tend to have simpler balance sheets, better enabling management and supervisors to take corrective actions more quickly than is the case with an internationally active banking organization in a stressed scenario.

In its final rule, the Fed opted instead simply to multiply the HQLA requirement derived under the LCR calculated with a 30 day horizon by 70 percent (21 days divided by 30 days), because it is simpler and similar to calculating the requirement at the 21-day horizon.  In short, the Fed concluded that banks over $250 billion in assets were sufficiently complex that it would take a month to resolve liquidity problems at the bank while it would only take three weeks for a bank with between $50 and $250 billion in assets (“medium-sized bank”).

This approach was a departure from Fed practice, which generally does not consider asset size alone a good measure of complexity.  In particular, for determining how much capital or long-term debt a bank should hold, the Fed has established a multi-characteristic metric called a “systemic risk score.”  There are actually two versions of the systemic risk score, one created by the Basel Committee for Bank Supervision (BCBS) and one created by the Fed.  Here we use the BCBS score because all components of the score are available for all banks in our sample.  The components of the BCBS score are size, interconnectedness, substitutability, complexity, and cross-jurisdictional activity.  Using that metric, the Fed has defined a category of bank called a GSIB (Global Systemically Important Bank).  There are eight U.S. GSIBs.

There are currently three U.S.-owned large banks that are not GSIBs but have more than $250 billion in assets and so must comply with the full LCR.  (We defer for future analysis foreign-owned banks and banks that must comply with the full LCR only because of significant holdings of foreign assets, as both types of banks have different liquidity and funding characteristics than traditional domestic banks.)  The Fed implicitly has determined that these large non-GSIBs do not need to hold the extra capital and long-term debt required of a GSIB, but that it would take them just as long as a GSIB to resolve liquidity problems.

The Fed has indicated that it is reconsidering the treatment of these large-non-GSIBs under the LCR.  In a recent speech, The Board’s Vice Chairman for Supervision, Randal Quarles, stated

Liquidity regulation, for example, does not have a GSIB versus non-GSIB gradation. In particular, the full liquidity coverage ratio (LCR) requirement and internal stress testing requirements of enhanced prudential standards apply to large, non-GSIB banks in the same way that they apply to GSIB banks. I believe it is time to take concrete steps toward calibrating liquidity requirements differently for large, non-G-SIBs than for GSIBs. 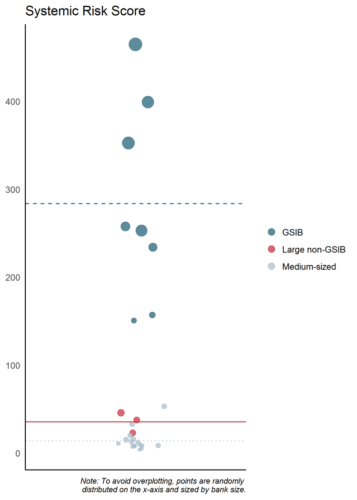 A formal statistical analysis reaches the same conclusion:  We use hierarchical cluster analysis (HCA) to test whether large non-GSIBs look more like GSIBs or more like the medium-sized banks subject to the modified LCR, on the basis of the components of their systemic risk scores.  The algorithm first assigns each bank to its own cluster, then groups the two most similar clusters, then groups the two most similar clusters after that, continuing until all banks are in a single cluster. This is illustrated by the dendrogram below.

At the bottom of the dendrogram, each individual bank is represented by a single point. Moving towards the top of the graph, the line segments show how the banks are progressively grouped together. Height indicates dissimilarity. The short vertical line segments connecting medium-sized banks and large non-GSIBs to their first, second, and third-round groupings show just how similar they are. The large non-GSIBs are grouped strictly with medium-sized banks until the second-to-last stage, when there are only two groups. This is unsurprising given the distribution of systemic risk scores.  (For HCA aficionados:  We use Euclidean distance to determine similarity, but other metrics such as Manhattan, Canberra, and maximum distance give qualitatively similar results.) 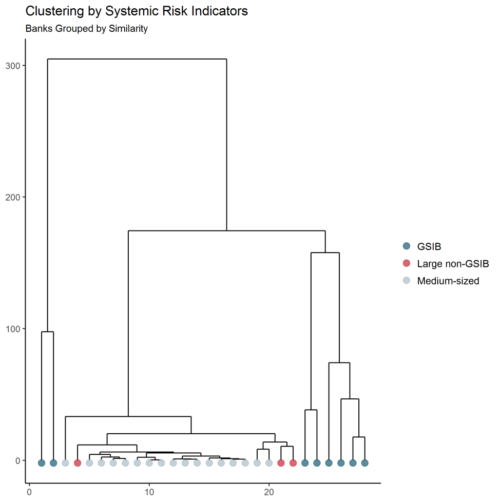 While the large-non-GSIBs’ distance from being classified as GSIBs is notable, there is a certain circularity about evaluating the large-non-GSIBs using the characteristics used to identify GSIBs.  The banks, after all, had already been classified as non-GSIBs using those characteristics.  To address this concern, we also evaluate the banks using a different set of indicators chosen to identify a bank’s balance sheet and funding complexity.  In particular, we use the ratios of broker-dealer assets to total assets, domestic deposits to total assets, trading assets to total assets, notional derivatives to total assets, domestic loans to total loans, and the wholesale funding ratio.  As can be seen in the second dendrogram, the results are quite similar. While using balance sheet and funding complexity does not produce a perfect division of GSIBs and medium-sized banks, it still shows that the large non-GSIBs are more similar to the medium-sized banks than the GSIBs. 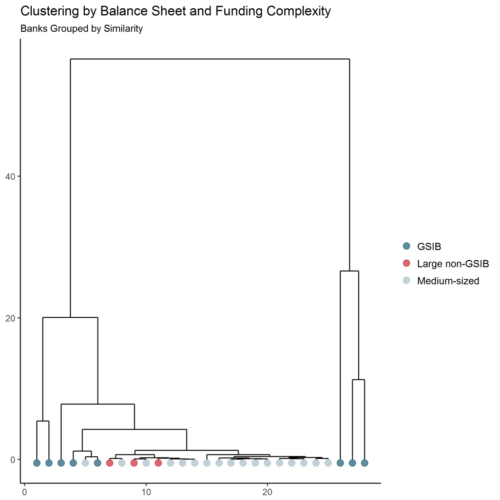