Volatility in two little-known Fed liabilities – the Treasury General Account (TGA) and the Foreign Repo Pool – was an important reason why the Fed decided in January to continue implementing monetary policy using the large-balance-sheet approach that it adopted during the financial crisis, as opposed to the small-balance-sheet approach it used before the crisis. Changes in the TGA and the Foreign Repo Pool cause one-for-one shifts in bank deposits at the Fed (aka “reserve balances” or “reserves”) unless the Fed engages in offsetting changes in the size of its balance sheet. Pre-crisis, the Fed offset such volatility in reserves by varying the size of its book of repurchase agreements. Given the volatility of those two liability items, the Fed concluded that conducting policy in the pre-crisis manner would require repo operations that were undesirably large and frequent.[1]

Implementing monetary policy with a large-balance-sheet approach was one way to adjust monetary policy for increased volatility in those accounts. But, as described below, another would have been, and still would be, simply to reduce that volatility.

TREASURY GENERAL ACCOUNT AND THE TREASURY TAX AND LOAN PROGRAM

The Treasury has a large and variable cash balance that it holds at the New York Fed in the Treasury General Account. As can be seen by the purple line in the graph, the account was small and less volatile pre-crisis, averaging about $5 billion. Most of the Treasury cash was deposited at commercial banks and other depository institutions through the Treasury Tax and Loan program (TT&L), the black line. 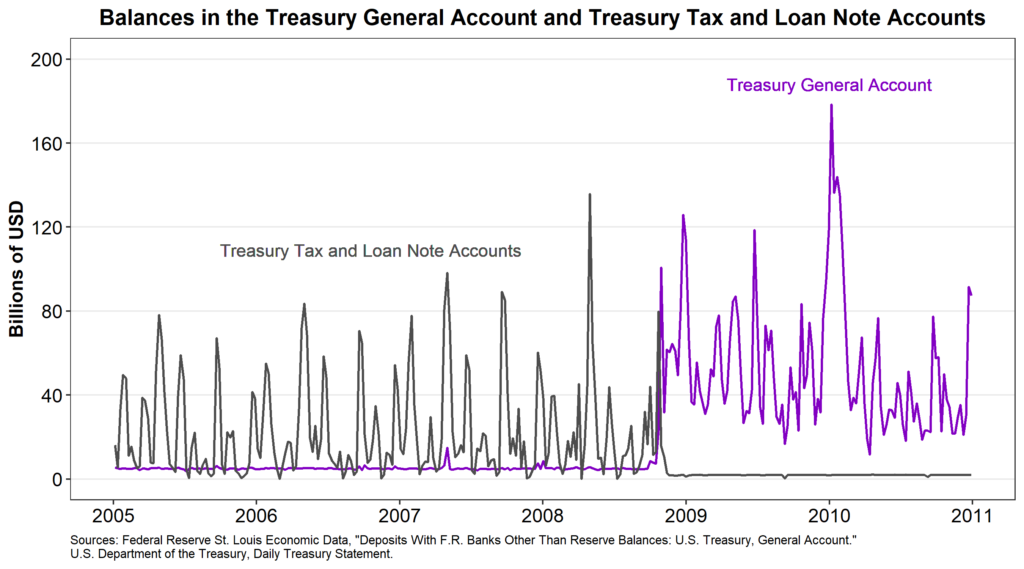 As stated in a description of the TT&L program published by the New York Fed in 2004, “The Treasury Tax and Loan program, a joint undertaking of the Treasury and the Federal Reserve, is designed to manage federal tax receipts and stabilize the supply of reserves in the banking system.”

A second New York Fed paper, “The Evolution of Treasury Cash Management during the Financial Crisis,” explains why the Treasury increased the Treasury General Account and decreased TT&L accounts. In the fall of 2008, the Treasury increased the TGA to help the Fed finance its emergency lending. From 2009-2015, the interest rates that banks paid on the TT&L deposits (along with all other market rates) were essentially zero, but the interest rate the Fed paid on deposits was 25 basis points; therefore, the Treasury kept funds in the TGA and out of TT&L deposits because it saved taxpayers money. Even though the Fed does not pay interest on the Treasury General Account, it invests the funds in government securities and remits the interest earned to Treasury; moreover, the TGA deposits reduce banks’ reserve deposits one-for-one, allowing the Fed to lower the interest expense it incurs when it pays banks interest on reserve balances. 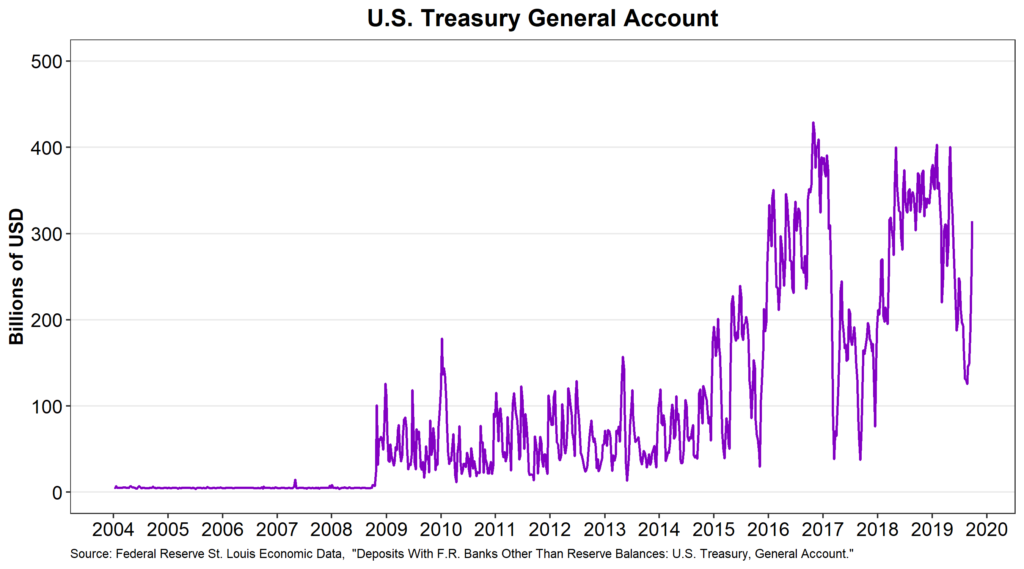 As can be seen in the graph above, the Treasury General Account increased further in 2015 and has become much more volatile. The increase reflects a decision by Treasury to keep projected cash needs for one week in the general account (see the Treasury’s Quarterly Refunding Statement on 6 May 2015); the volatility reflects in part periodic depletion and then restocking of the account because of debt ceiling debacles.[2]

The other Fed liability item that has grown significantly since the financial crisis is “Reverse Repurchase Agreements: Foreign Official and International Accounts,” aka the “Foreign Repo Pool.” As described on the New York Fed’s website, foreign official and international holders of accounts at the Fed invest in overnight reverse repurchase agreements where they provide the Fed cash and receive securities held in the Fed’s securities portfolio; they are paid an interest rate tied to comparable market-based interest rates. The foreign official and international institutions put funds into the foreign repo pool because the reverse repos are a safe and highly liquid dollar investment. The Fed indicates that it provides banking and financial services for “about 250 central banks, governments and international official institutions,” but the list of institutions is not provided to the public. 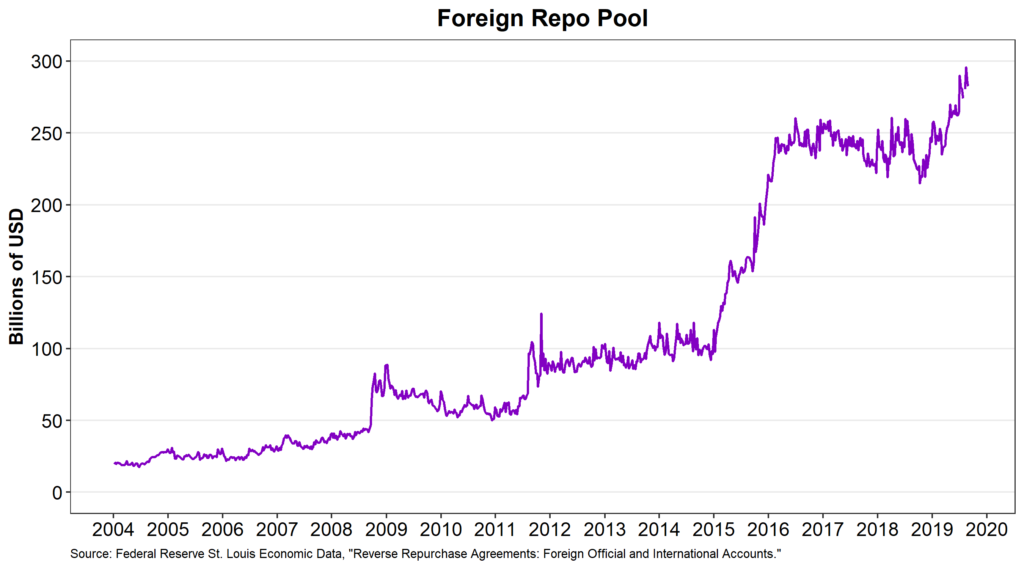 Under the pre-crisis framework, because variation in the foreign repo pool required offsetting open market operations, the Fed had placed limits on foreign official institutions’ investments in the pool. In addition, the Fed paid a somewhat-below-market rate on the investments.[3]

Post-crisis, the size of the foreign repo pool rose markedly. The Fed described the reasons for the increase in “Domestic Open Market Operations During 2016,”

The rise in balances in recent years reflects central banks’ preferences to maintain robust dollar liquidity buffers, the reduced availability of alternative investment options with private counterparties, and the New York Fed’s removal over time of constraints on customers’ ability to vary the size of their investments. p. 30.

The Fed likely reduced the constraints it had been imposing on the ability of customers to “vary the size of their investments” because doing so was not necessary under the large-balance-sheet framework it was using to implement monetary policy. The “reduced availability of alternative investments options” reflected a reluctance on the part of banks and broker-dealers to increase the size of their balance sheets, with attendant capital consequences, by investing the cash of foreign central banks.[4]

In addition, as described in the Money Market Observer newsletter, the Fed increased the interest rate it was paying on investments in the Foreign Repo Pool relative to other market rates.[5] The increase took place even though the Fed did not change the formula it used to calculate the rate because of shifts in the relative values of the underlying market rates.

Decisions about the administration and thus the size of the Treasury General Account and Foreign Repo Pool have profound consequences. As noted above, and as described in the minutes of the November and December 2018 and January 2019 FOMC meetings, the Fed decided to continue operating policy using its post-crisis large-balance-sheet approach in part because volatility in those two items created volatility in reserve balances and thereby made returning to the pre-crisis small-balance-sheet approach problematic.[6] More immediately, the demise of the TT&L program also contributed to the volatility in money markets observed two weeks ago. As we noted last week in “Fed at a Crossroads,” if corporate tax receipts had been reinvested by the Treasury into TT&L deposits, banks would have been able to reinvest those funds, lessening the dislocation in repo markets.

Thus, it is concerning that the decisions to allow massive growth in the Treasury General Account and Foreign Repo Pool may not have been made with sufficient deliberation. As described above, the Fed and Treasury elected to leave Treasury cash balances in the TGA rather than in deposits under the jointly run TT&L program even after interest rates began to rise, but there is no record of that decision in any FOMC minutes. Similarly, the Fed decided in 2015 to remove constraints on foreign official counterparties’ ability to vary the size of their investments in the Foreign Repo Pool; again, though, we cannot find this decision reflected in the FOMC minutes. Thus, as the Fed grapples with numerous adverse consequences of its continued operation of a floor system, it may be worth a wholesale review of the decisions, or non-decisions, that led it there.

[2] The most recent entries in the graph depict the sharp rise in the TGA as corporate tax receipts flowed in in mid-September, a proximate cause of the recent turmoil in money markets, see the BPI blog posts Fed at a Crossroads, What Just Happened in Money Markets, and Why it Matters, Bank Regulations and Turmoil in Repo Markets, and Impending Money Market Volatility Prompts Warning Light for LCR Tune-Up.

[3] See “Money Markets after Liftoff: Assessment to Date and the Road Ahead,” Remarks at the 70th Anniversary Celebration of the School of International and Public Affairs at Columbia University, New York City, Simon Potter, February 22, 2016.

[4] See Potter 2016. For a discussion of how the increased cost of private sector balance sheets contributed to the recent turmoil in money markets, see the BPI blog post Bank Regulations and Turmoil in Repo Markets.