The U.S. GSIB Surcharge is Overstated in Light of Basel III Changes

The eight, large, internationally active banks based in the United States are required to maintain capital ratios that are higher than the requirements for the other U.S. banks.  The added requirements are called Global Systemically Important Bank (GSIB) surcharges and currently vary between 1 and 3.5 percentage points.  No problem in principle – an 18-wheeler should be subject to higher safety standards than a Mini Cooper – but as we’ve pointed out, the way the Fed calculates the surcharges is deeply flawed.  The Fed’s stated objective for the surcharges violates basic economics (see “The Fed Designed the GSIB Surcharge to Achieve a Flawed Objective”), and the way the Fed calibrated the surcharge to achieve that objective is based on an arbitrary statistic (see “Overview and Assessment of the Methodology Used to Calibrate the U.S. GSIB Capital Surcharge”).  We have also pointed out that for the calibration to be accurate by its own design, then the Fed needs to adjust the surcharges for economic growth, as the Fed promised it would do, (see “Adjusting for economic growth (as called for by the Fed), GSIB surcharges should be lowered”) and for the impact of other new regulations (see “Estimating the LCR haircut to the GSIB surcharge” and “Seeing the Forest for the Trees: GSIB Capital and Enhanced GSIB Regulation”).

In this blog post, we focus on how a proper accounting for the impact of post-regulatory financial reform on capital risk weights — basically, one that updates the Fed’s original calculation — would affect the GSIB surcharge.  Adjusting for that impact, GSIB surcharges should be reduced by 29 percent; that is, correcting for this change in RWA alone would result in surcharges between 71 and 248 basis points.

To calibrate the GSIB surcharge, the Fed estimates the probabilities that a bank holding company held to different levels of capital requirements will experience a loss over a one-year period large enough to fail.  As the Fed describes in its whitepaper “Calibrating the GSIB Surcharge,” the Fed estimated those probabilities using the data on bank holding company profits from 1987Q2 through 2014Q4.  The GSIB surcharge is expressed as a percentage of risk-weighted assets (RWA), with each type of bank asset weighted for risk before adding up, and each bank holding company’s profit or loss is also divided by RWA so that it is on a comparable basis.  The Fed whitepaper refers to the ratio of profits to RWA as “return on risk weighted assets” or “RORWA.”  The Fed used 27 years of observations for the 50 largest bank holding companies to estimate the probability that a negative RORWA (a loss) would exceed different choices of GSIB surcharge.

However, Fed’s probability estimates are biased because the U.S. implementation of Basel III financial reforms, which were mostly phased in between 2013 and 2015, raised capital risk weights significantly.  Because asset risk weights were lower prior to the reforms, RORWA (profits divided by RWA) was higher when positive and lower when negative.  Consequently, the probability distribution estimated by the Fed to calibrate the GSIB surcharge placed too high a probability on any given level of potential loss.  The Fed recognized that this problem existed, but stated, somewhat oxymoronically, that it could not identify its size and that its size was immaterial:

This paper treats dollars of risk-weighted assets as equivalent regardless of whether they are measured under the risk weightings of Basel I or of Basel III. This treatment makes sense because the two systems produce roughly comparable results and there does not appear to be any objectively correct conversion factor for converting between them.[1] (p. 9)

There are, however, data that can be used to size the effect, and the effect is, in fact, material.

The transition from the Basel I to Basel III framework occurred in two steps: market risk weights changed in 2013Q1 (part of what is often known as Basel II.5), and credit risk weights changed in 2015Q1. In each of these quarters, many BHCs reported estimates of RWA using both Basel I and Basel III weights, allowing us to observe the effect of the new weights on reported RWA. The table below gives the change in RWA as calculated under Basel I and Basel III for seven of the eight US GSIBs (Morgan Stanley and Goldman Sachs did not report the two different calculations of RWA for the same quarter, but we could estimate Goldman Sachs’s RWA using data from multiple quarters). As shown in the table below, the effect varies, ranging from a 15.3 percent increase at Bank of America to a 93.4% increase at Goldman Sachs. The average of these changes, weighted by Basel I RWA, is 29.4 percent. 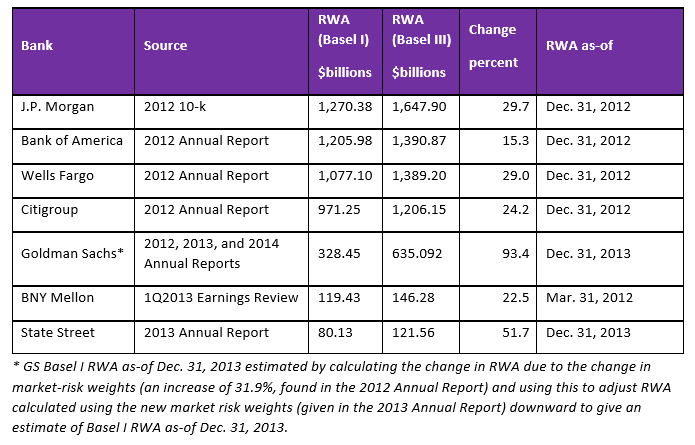 As a cross-check, we can more crudely estimate the effect of the two separate changes in risk weights for a wider range of banks by calculating the ratio of RWA in the quarters before (period 1) and after adoption (period 2), doing the same with unweighted total assets, and taking the ratio of the two:

Aggregating the 50 largest BHCs by RWA, the above calculation yields an estimated 6.2 percent increase in RWA due to the change in market risk weights in Q12013 and a 12.2 percent increase due to the change in credit risk weights in Q12015.  The cumulative effect is 18.9 percent, roughly in line with the actual impacts reported by the U.S. GSIBs.Armed with an estimate of the impact of the increase in RWA caused by the shift to Basel III, it is not complicated to correct the calibration of the GSIB surcharges. Based on the GSIBs’ quarterly and annual public audited reports, risk weights are now 29 percent higher than before reform, so pre-reform RORWAs need to be reduced by 29 percent to put them on an equivalent basis.  That reduction translates directly into a like-sized reduction in GSIB surcharges.  Rather than varying between 100 and 350 bp, adjusting just for the impact of Basel III on risk weights, the surcharges should range from 71 to 248 bp.[2]

This estimate of the impact of Basel III on RWA and hence the necessary adjustment to the calibration of GSIB surcharges could certainly be improved.  Ideally, the new risk weights would be applied retroactively, at least at the level of the data available, to the RWAs for each bank and each quarter in the dataset used to calculate the probability distribution of losses.  That said, adjustments such as the one reported here are used widely to put capital metrics from different time periods and under different regulatory regimes on a common basis.[3]

[2] The Fed estimates the probability distribution of RORWA using an equation RORWA = 2.18 ln(x) – 4.36, where x is the distribution percentile, and the GSIB surcharges as -2.18 times the ratio of the loss given default of a reference non-GSIB to the loss given default of the GSIB.  If RORWA is reduced by 29 percent, “2.18” in the first equation also needs to be reduced by 2 percent to fit the data, lowering the calibration for GSIB surcharges in the second equation by 29 percent as well.