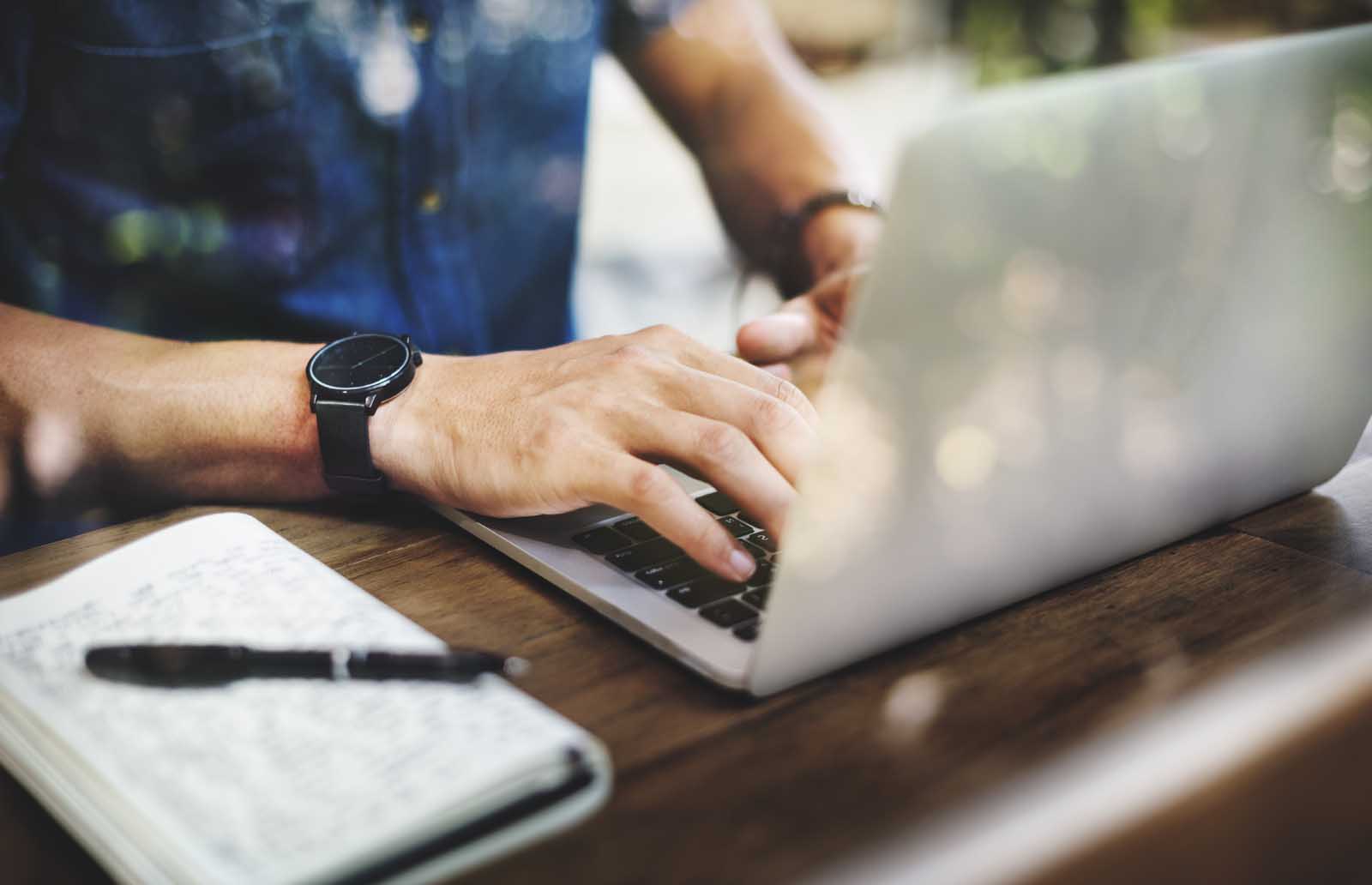 The Basel III capital rules, which were finalized in 2013 in the U.S., significantly increased the amount of capital banks are required to hold to service residential mortgage loans.[1]  In October 2017, a notice of proposed rulemaking (NPR) was issued by the Federal banking agencies that would reduce capital requirements for mortgage serving assets (MSAs) held by non-advanced approaches (non-AA) banks, while maintaining the Basel III capital treatment of MSAs for advanced approaches (AA) banks.[2] The banking agencies finalized their rule last month without modifications, with an effective date of April 1, 2020.  This blog post shows that following the issuance of the NPR, non-AA banks increased their holdings of MSAs by a statistically significant amount relative to other banks.  This evidence indicates that the capital requirement for MSAs has been acting as a constraint for banks of all sizes when making capital allocation decisions.

In view of the increased capital requirements imposed on banks, nonbanks that are not subject to such requirements have been able to gain market share in the mortgage servicing space in the post-crisis period.  The rise in the role of nonbanks has raised concerns because all the mortgages for which nonbanks collect payments are insured or guaranteed by the GSEs and Ginnie Mae and therefore the failure of nonbanks in the next downturn could put taxpayers at risk.  Moreover, the thin capital and liquidity cushions of nonbank servicers may also result in excessive foreclosures during the next crisis.  To incentivize banks to regain some of their traditional role and market share in mortgage servicing and avoid some unintended consequences in the next crisis, the agencies should extend the reduction in capital requirements for MSAs to AA banks and re-evaluate the increase in regulatory risk-weights assigned to MSAs for all banks.

Under the capital rules currently in effect, banks must deduct from their common equity tier 1 (CET1) capital any MSAs that exceed 10 percent of their CET1 capital.[3]  Amounts below the 10 percent threshold were risk-weighted at 100 percent until December 2017 and then rose to 250 percent after that for AA banks.[4]  For non-AA banks, the recently issued final rule will increase the deduction threshold from 10 percent to 25 percent but will apply the 250 percent risk-weight to MSAs not deducted from capital, each beginning on April 1, 2020. 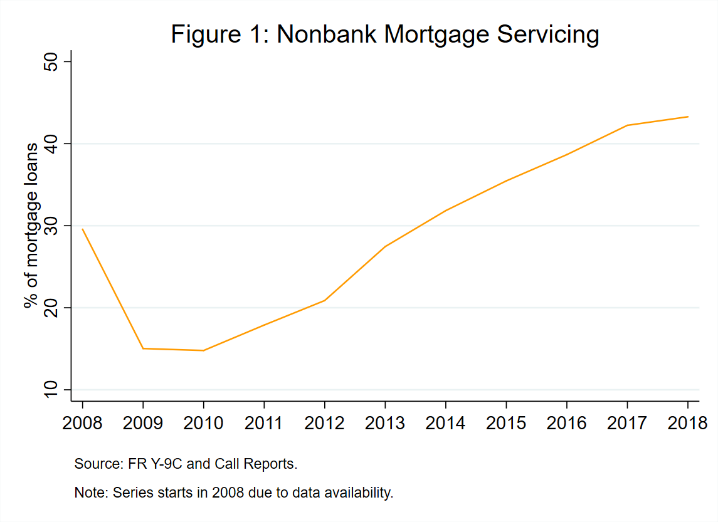 The significant rise in banks’ capital requirements post-crisis helped nonbanks increase their market share considerably over the period both on the origination and servicing of mortgage loans.  As shown in the chart above, the nonbank mortgage servicing share went from 15 percent in 2009 to approximately 45 percent at the end of 2018.  While it is true that the GSEs and Ginnie Mae impose capital and liquidity requirements on nonbanks, those are considerably less stringent than the capital requirements applied to banks.  For example, there is no threshold above which the amount of MSAs that nonbanks hold is deducted from capital.  Moreover, nonbanks are subject to a non-risk-based capital requirement of 6 percent of their net worth.

As noted by Kim et al. (2018), nonbanks engaged in mortgage servicing are subject to significant liquidity risk because the servicer must make payments to the holders of mortgage-backed securities (MBS) before it receives payments from the borrowers.  These advances, which must be financed by the nonbanks, can be material and create a liquidity problem for loan servicers if they are sufficiently sizable.  Also, nonbanks don’t have a stable source of funding, like deposits.  Instead, they rely on credit lines provided by banks to fund both advances and the origination amounts of the loans before the loans are sold or securitized to the GSEs.  Thin capital positions and potential liquidity issues will likely translate into heightened risk for nonbank lenders during times of financial stress.

In addition, there is an agency problem between dispersed MBS investors (principal) and mortgage servicers (agent). To deal with the principal-agent problem, a contract is executed between MBS investors and mortgage servicers. The conditions are straightforward for mortgage borrowers that make payments every month, but issues arise when a borrower defaults.  Because foreclosures entail significant deadweight costs, MBS investors (or the guarantor) would want the servicer to restructure the mortgage, benefiting the long-term value of the MBS securities. However, because the servicer (agent) needs to upfront the payments to the MBS investors while the loan is being renegotiated, the loan servicer has an incentive to foreclose on the loan.  Moreover, because servicing agreements typically reimburse foreclosure expenses, the mortgage servicer has an additional incentive to foreclose on the mortgage loan.

As a result of the agency problem that exists in the servicing of mortgage loans, servicers that are thinly capitalized have an added incentive to aggressively pursue borrowers to receive payments and to expedite foreclosure proceedings on the loan due to their capital constraints.  In contrast, well-capitalized banks have less of a constraint in continuing to make payments to the holders of mortgage-backed securities.  Thus, one natural advantage of having banks more involved in the servicing of mortgages (i.e., holding larger amounts of MSAs) is that it would likely lead to fewer foreclosures in the next recession and dampen the impact of a recession in the housing market, thereby speeding up the economic recovery.  This would also reduce the material social costs foreclosures have on homeowners and their communities.

We use data on banks’ balance sheets to assess the impact of the increased deduction threshold on non-AA banks holdings of MSAs.[5]  The chart below shows the ratio of MSAs to capital since the first quarter of 2001.  Prior to the adoption of Basel III in the U.S., MSAs accounted for approximately 10 percent of banks’ capital in the aggregate.  Around the time of the introduction of the Basel III final rule in the U.S., banks’ holdings of MSAs dropped to approximately 3 percent of CET1 capital.[6] 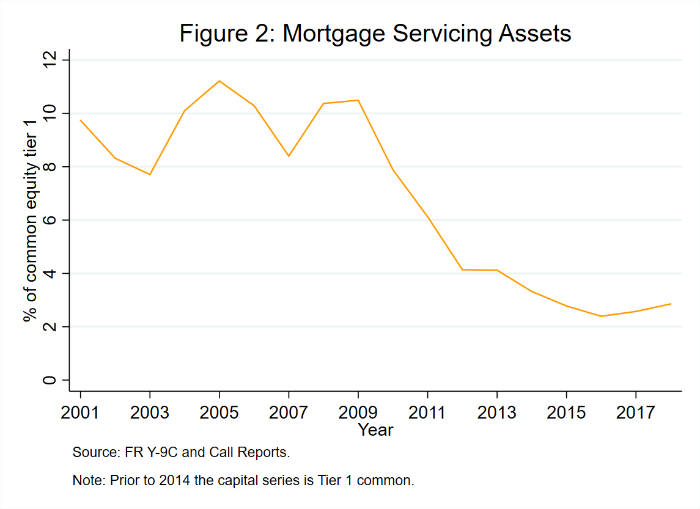 The table below provides a list of 10 banks with the highest ratio of MSAs relative to CET1 capital as of the first quarter of 2019.  Both AA and non-AA banks hold a significant amount of MSAs on their books, which will be important for the identification strategy used below.  Moreover, almost all banks in our sample have MSAs well below the current deduction threshold of 10 percent of CET1 capital.

*Advanced Approach standing is prior to the notice of proposed rulemaking to tailor prudential standards for domestic banks.

To assess the impact of the increase in the deduction threshold for non-AA banks, our analysis compares the holdings of MSAs of non-AA and AA banks before and after the agencies published the proposed rulemaking modifying the treatment for non-AA banks.  Figure 3 below shows the ratio of MSAs to capital for AA and non-AA banks before and after the announcement.  Up until the fourth quarter of 2016, the ratio of MSAs to CET1 capital is similar across the two bank groups.  During 2017 and 2018, the increase in MSAs is more pronounced at non-AA banks. Although the proposed change in regulatory capital was announced in the third quarter of 2017, the agencies had indicated in the first quarter of 2017 that they were planning to revisit the capital treatment of MSAs.  Shortly after the proposed rule was published in the third quarter of 2017, MSAs as a share of CET1 rose at non-AA banks while they declined at AA banks.  In summary, between the announcement and the most recent data point, non-AA MSAs increased about 1 percentage point relative to capital. 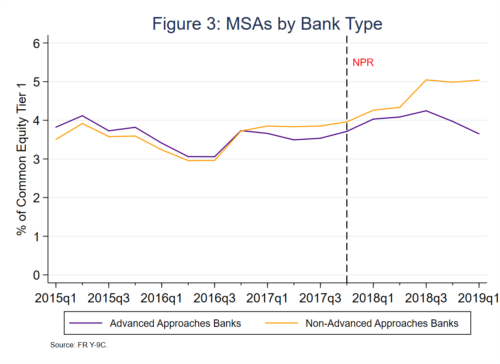 Figure 4 displays the estimated impact of reducing the capital requirement of MSAs for non-AA banks compared to AA banks, along with 95 percent confidence intervals constructed using standard errors clustered at the bank level.  The impact in the quarter prior to the change in capital requirements is normalized to zero, thus all estimates are obtained relative to the third quarter of 2017. In the quarters prior to the reduction in capital requirements for the non-AA banks, the trends in the ratio of MSAs to capital are not statistically different from zero between AA and non-AA banks.  The introduction of the proposed rule in October 2017 led to an increase in MSAs at non-AA banks as shown by the positive and statistically significant estimates.  For instance, in the fourth quarter of 2018 the estimated coefficient is 1.2 percent and it is statistically different from zero after controlling for each bank’s capital buffer under CCAR, the share of mortgage loans relative to all loans, the share of liquid assets (the sum of cash, U.S. Treasuries and agency MBS) and bank-fixed effects.  Thus, relative to placebo AA banks, non-AA banks increased their MSAs by more than 1 percent at the end of 2018. This shows that the reduction in capital requirements of MSAs for non-AA banks accounts for more than a 1 percentage point increase in the share of MSAs. 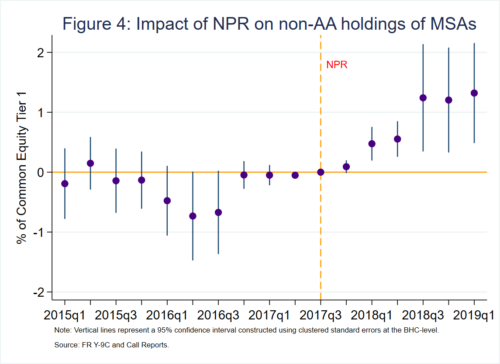 Nonbanks have gained a sizable market share in the mortgage servicing space in the post-crisis period.  Because many nonbanks service mortgages guaranteed or insured by the GSEs, the failure of nonbanks in the next downturn could put taxpayers at risk. In addition, there may be excessive foreclosures during the next downturn because nonbank servicers have thin capital and liquidity buffers.  The recently issued final rule reduced somewhat capital requirements for non-AA banks as compared to AA banks, and our analysis shows that the change in policy is already having a statistically significant impact on non-AA banks’ holdings of MSAs. This evidence indicates that if the agencies wish to reduce a source of potential systemic risk in a future downturn, the agencies should take steps to incentivize banks to increase their mortgage servicing activities.  Such steps should include re-evaluating the increase in risk weights of MSAs from 100 percent to 250 percent and extending the increase in the CET1 deduction threshold to AA banks.

[1]   As a result of the transitional arrangements, not all the increase in capital

[2] “Advanced approaches” banks are those that are permitted by the Federal Reserve to use internal models and approved by their supervisors to calculate risk-based capital requirements.  Advanced approaches banks include large, internationally active banks, generally those with at least $250 billion in assets or at least $10 billion in total foreign exposure.  Mortgage servicing assets represent the present value of fees lenders collect for servicing mortgage loans.

[5] The NPR also froze the risk-weight for MSAs at 100 percent until April 1, 2020.  Because the freeze is temporary, we assume the most significant factor is the permanent increase in the deduction threshold.

[6] The decline is amplified by the significant increase in CET1 to assets that took place over this period.  As a percentage of assets, MSAs declined from 0.5 percent to 0.2 percent during the same period.

A Modification to the Basel Committee’s Standardized Approach to Operational Risk May 4, 2022
Consumer Affairs

Five Important Facts about the Competitiveness of the U.S. Banking Industry February 24, 2022