One of the key determinants of required capital for large banks with a global footprint is the so-called GSIB capital surcharge.  This surcharge is an extra capital buffer that the eight U.S. Global Systemically Important Banks (GSIBs) are required to hold and is determined according to a regulatory assessment of each bank’s systemic footprint, or “GSIB score.”  In this post we call attention to one component of the GSIB score that has perverse consequences, namely the value of the bank’s common equity. Specifically, it penalizes a bank for growing its stock price and requires a bank that has reduced its risk to nonetheless increase its capital or constrain its lending.  Specifically, we show that the increase in the common equity component of the GSIB score is material and distorts incentives to engage in lending that would otherwise support economic growth.

The GSIB surcharge is based on a bank’s GSIB score, which is the product of five broad measures relating to size, interconnectedness, complexity, cross-jurisdictional activity, and short-term wholesale funding.

There may be a policy rationale for linking the GSIB surcharge to a bank’s interconnectedness with other key financial institutions, but there is no argument for using the value of a bank’s outstanding securities not held by another GSIB as a proxy for interconnectedness. Specifically, U.S. GSIBs issue substantial amounts of securities that are held widely and broadly by institutional investors and retail investors all over the world.  A concentrated holding of a bank’s securities by another GSIB could be an indicator of systemic interconnectedness, but the total amount of securities outstanding is not relevant; the failure of a GSIB would cost a mutual fund, pension fund, insurance company or individual investor some money, but that loss would not have systemic consequences.  Put another way, it is indistinguishable systemically from a loss for those investors from any other type of company.   Therefore, the amount of securities outstanding is a deeply flawed proxy for interconnectedness.

The conceptual problem with using securities outstanding as a proxy for interconnectedness is exacerbated by the practical problem that some items are required to be measured using market values, most notably common equity.  Most of the components of outstanding securities, such as senior unsecured debt securities, commercial paper and certificates of deposit, are reported using book value.  This represents the par value of the securities that were issued and does not vary with fluctuations in market valuations.  As we will discuss, the distinction between market value and book value is important because the use of market value leads to outcomes that are nonsensical and create undesirable incentives. 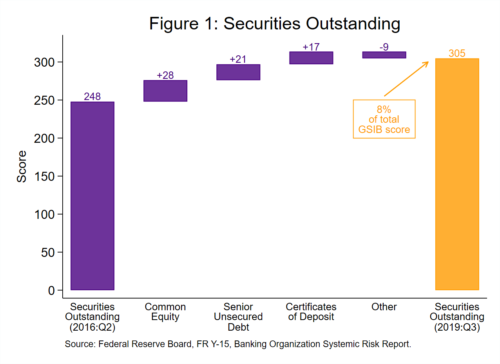 In addition, as depicted in Figure 1, the size of the securities outstanding component of the overall GSIB score has experienced a cumulative increase of 57 GSIB score points between the second quarter of 2016 (the first quarter the relevant data are available) and the third quarter of 2019 across all eight U.S. GSIBs. In dollar terms, the cumulative increase in the amount of securities outstanding was approximately $630 billion. Figure 1 shows that common equity accounted for nearly 50% of the cumulative increase over the period, or more than $300 billion. Moreover, because common equity is measured using market values, the increase in this component has also varied significantly over this period and reached a peak of 50 points if measured between the second quarter of 2016 and the end of 2017. The other two important items driving the increase in securities outstanding were senior unsecured debt securities and wholesale certificates of deposit, which added cumulatively 21 and 17 points to the GSIB score, respectively.

A key tenet of bank capital theory is that a more efficient and less risky bank should be required to fund itself with less, and not more, equity capital.  This tenet, however, is violated by the GSIB surcharge’s requirement to measure common equity outstanding using market values.  Specifically, consider a bank that reduces expenses while making prudent investment decisions, resulting in greater positive operating leverage.  Investors will naturally value this bank more highly because the reduction in costs will increase the bank’s earnings and the market value of the bank’s common equity will rise to reflect the higher valuation.  The use of the market value of common equity in the GSIB score, however, will result in an increase in the bank’s GSIB score, thereby raising the bank’s required capital.  Similarly, if a bank improves its risk management, say by improving its loan underwriting process, and becomes less risky, its market value will also go up because the volatility of its earnings would fall, making it more attractive to investors. Moreover, relying on market values to determine the GSIB score will subject the GSIB score to variation from a multitude of exogenous factors that result in varying stock prices – such as investor sentiment – even if they have no discernible relationship with a bank’s systemic risk.

There are many other problematic issues about tying a bank’s GSIB score and surcharge to its market value.  If a bank reins in its costs, which improves its profitability and stock price, should it then be required to hold more capital?  It is hard to see a convincing explanation for why improved efficiency and profitability should automatically result in an increased measure of systemic importance and heightened capital requirements.

In addition, relying on the market value of equity in the GSIB score encourages banks to buy back their equity at year-end when regulators measure GSIBs’ systemic scores for the purposes of setting their capital surcharges.  As a result, the GSIB score methodology unnecessarily favors stock buybacks over dividends or investment.

Measuring the Cost of Distorted Incentives

Until now, the discussion has largely been conceptual. This section demonstrates quantitatively how much lending capacity at U.S. GSIBs could be curtailed by an increase in its common equity score and, more broadly, its securities outstanding score. The analysis is illustrative and should not be interpreted as implying an automatic link between a rise in GSIB score and a decline in lending, though the results are worth considering because banks do actively manage their capital requirements as is appropriate and intended by regulators.  This is especially true in the case of the GSIB surcharge as it applies to all of the bank’s activities and creates a clear competitive disadvantage with respect to other banks not subject to the GSIB surcharge or those with a lower surcharge. 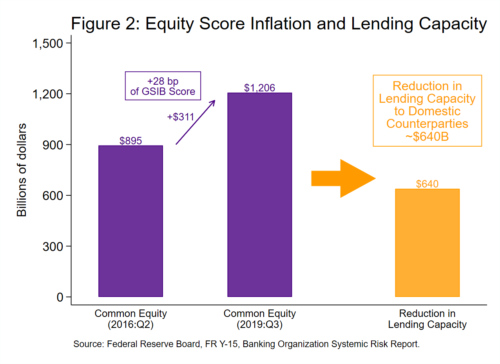 As shown earlier, the common equity score rose 28 score points between the second quarter of 2016 and the third quarter of 2019 as a result of the more than $300 billion increase in the market value of common equity. To measure the cost of misaligned incentives, we ask how much additional balance sheet capacity would U.S. GSIBs have if the increase in the market value of equity had not inflated their GSIB scores?  That increased balance sheet capacity would have allowed greater intermediation between savers and borrowers.  As shown in Figure 2, assuming all new loans would be made to domestic, nonfinancial corporations or U.S. households, U.S. GSIBs would have had an additional $640 billion in lending capacity had GSIB scores not been impacted by rising equity valuations.[1]  Similarly, we estimate that the increase in the securities outstanding score of 57bp reduced the lending capacity of all eight U.S. GSIBs by more than $1.28 trillion.  To help put these results into perspective, loans held on the books of U.S. GSIBs rose approximately $305 billion over the past three years, thus score inflation driven by higher equity prices and the increase in securities outstanding is material.

In summary, using the market value of equity to measure the GSIB score and surcharge is significant and may significantly reduce the lending capacity of U.S. GSIBs as they manage their capital requirements.  Moreover, tying a GSIB surcharge’s measure of systemic footprint to the market value of equity may have important unintended consequences due to the misaligned incentives that are created.

Large banks that are important to the functioning of the macroeconomy should maintain robust levels of capital.  In particular, U.S. GSIBs maintain robust levels of capital and have grown their capital positions substantially over the past decade.  At the same time, capital regulations should not directly disincentivize sound risk management and should not punish banks for being profitable and growing their stock price.  Large banks that are profitable and manage their risks appropriately support a growing economy.  The GSIB surcharge’s reliance on the market value of equity is highly problematic and distorts incentives in a way that may inappropriately reduce the lending capacity of large banks.  More broadly, the entire securities outstanding component of the GSIB score is problematic, does not clearly relate to a conceptually sound measure of systemic interconnectedness and distorts incentives.  Accordingly, regulators should seriously consider removing this component from the score of the GSIB capital surcharge methodology.

[1] This assumes all new loans would be made to domestic nonfinancial counterparties so only the size systemic indicator would increase. Specifically, the $640 billion estimate is obtained by taking the ratio between the change in the relevant score and the size coefficient of the GSIB surcharge under Method 2 (which is equal to 0.04423).  If new loans also went to foreign counterparties the change in lending capacity would have been smaller because we would have to factor in the increase in the cross-jurisdictional activity score.

How Much Will U.S. Businesses Pay for Loans? Translating a Basel Accord Into a U.S. Regulation November 8, 2021
More Posts by This Author
Newsletters