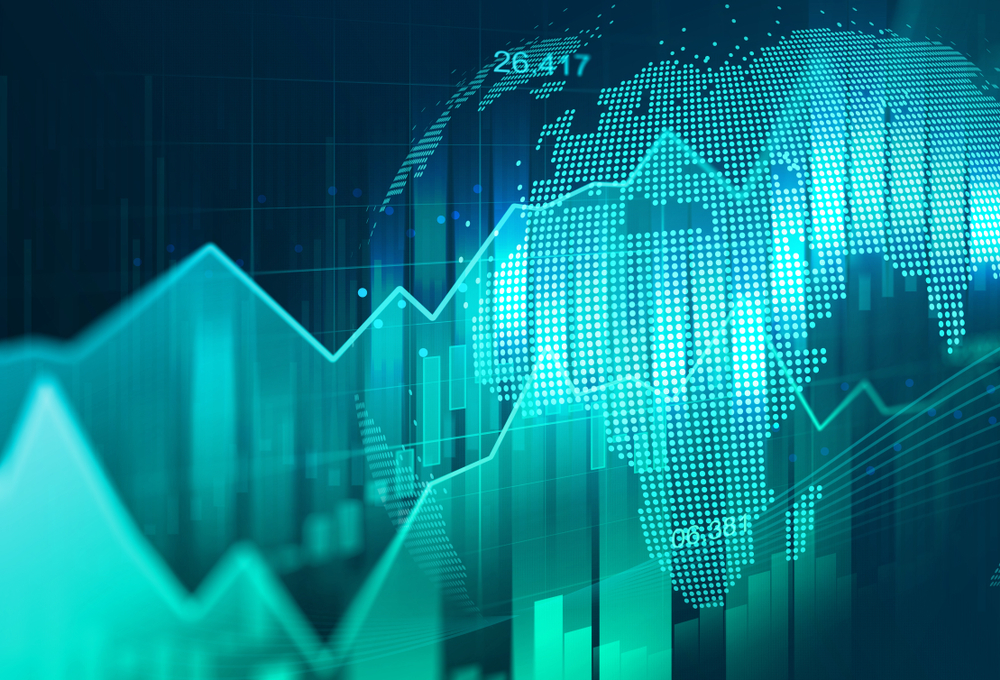 Subjecting banks to the global market shock (GMS) component in the U.S. stress tests reduced their holdings of debt securities by approximately two-thirds. Since large banks conduct key market-making activities, the GMS has a significant impact in reducing liquidity in the corporate bond market, which in turn raises borrowing costs for corporations and, ultimately, consumers. As a result, the Federal Reserve should revisit the assumptions imposed by the GMS.

This blog post discusses the impact of the global market shock component in the U.S. stress tests on banks’ holdings of trading assets.  The GMS has a sizable impact on large banks’ performance under stress and accounted for more than 40 percent of stress losses for a couple of the largest U.S. banks in the 2018 stress tests.  We identify the causal effect of the GMS component by comparing holdings of trading assets at stress-tested banks subject to the shock against those that are exempted.  Our results indicate that subjecting a bank to the GMS accounts for about 20 percent of the decline of the banks’ trading assets, and approximately two-thirds of the decline in the banks’ holdings of debt securities.  The GMS also reduces overall trading assets, since the largest banks hold most of these assets.

Trading and market-making activities are essential to well-functioning capital markets.  According to the U.S. flow of funds, about 64 percent of U.S. corporate debt was issued in bond markets, with the remaining 36 percent of debt provided via a bank loan.  Large banks play a key role in bond markets by holding large inventories of corporate bonds to conduct market-making activities, particularly of less liquid bonds.  Several of the post-crisis regulations, including the Volcker Rule, the supplementary leverage ratio, and the GMS component in U.S. stress tests led to a significant reduction in banks’ inventories of corporate bonds, thereby leading to a decline in banks’ market-making activities.  The decline in bond market liquidity has likely increased the cost of financing for U.S. corporations and reduced their investment expenditures.

The largest U.S. banks are subject to the global market shock scenario in CCAR, which requires banks to explicitly include very large trading losses, in addition to loan losses, operational risk and other losses over a nine-quarter stress horizon.[1] The GMS consists of an instantaneous “shock” to many risk factors that determine the mark-to-market value of trading positions.  The as-of date of the GMS is only known to the banks once the scenarios are published, and losses due to the GMS are assumed to be realized in the first quarter of the stress horizon.  Although the Federal Reserve used the GMS in the stress tests conducted in 2011, the shock was significantly revised in 2012 and 2013 and remained little changed since then, thus our demarcation point for measuring the impact of the GMS on banks’ balance sheets is the second quarter of 2013.

To assess the impact of supervisory stress tests on trading and market-making activities, the analysis is based on a difference-in-differences test comparing the holdings of trading assets of banks subject to the GMS to a group of banks exempted from the GMS, both before and after the GMS was included in CCAR in its current form.  The first difference is the difference in holdings of trading assets between the largest CCAR banks and a set of large regional and custodial banks.  The second difference is between the post-GMS difference and the pre-GMS difference.  Our results show that banks subject to the GMS decreased their ratio of trading assets to total assets following the introduction of the GMS in CCAR.  All banks in our sample are subject to the Volcker Rule, so our findings are in addition to the effects already identified by this regulation.[2] 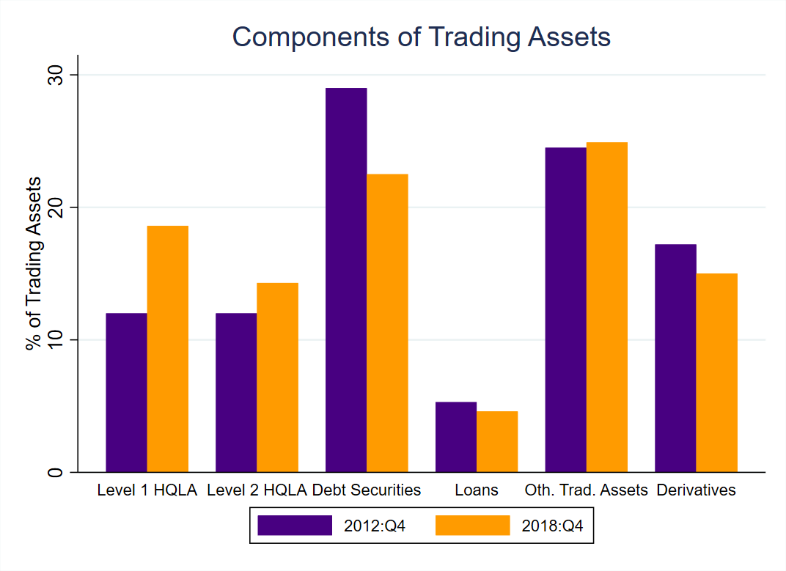 The chart below depicts the ratio of trading assets to total assets, for the GMS and non-GMS banks, before and after the inclusion of the GMS in CCAR.  While the two series are moving sideways up to the inclusion of the GMS in CCAR, the ratio of trading assets to total assets of the GMS banks is falling at a faster pace relative to the non-GMS banks subject to CCAR.  Of note, the share of trading assets is declining for both bank groups, probably driven by the impact of the Volcker Rule identified by other studies.  Also, the aggregate time-series of trading assets includes several asset classes and could mask the impact of the GMS on holdings of trading assets.  For example, the LCR and the liquidity buffers required by internal liquidity stress tests encourage banks to hold HQLA-type assets, and those requirements vary across stress-tested banks, while the GMS penalizes banks for holding corporate bonds. 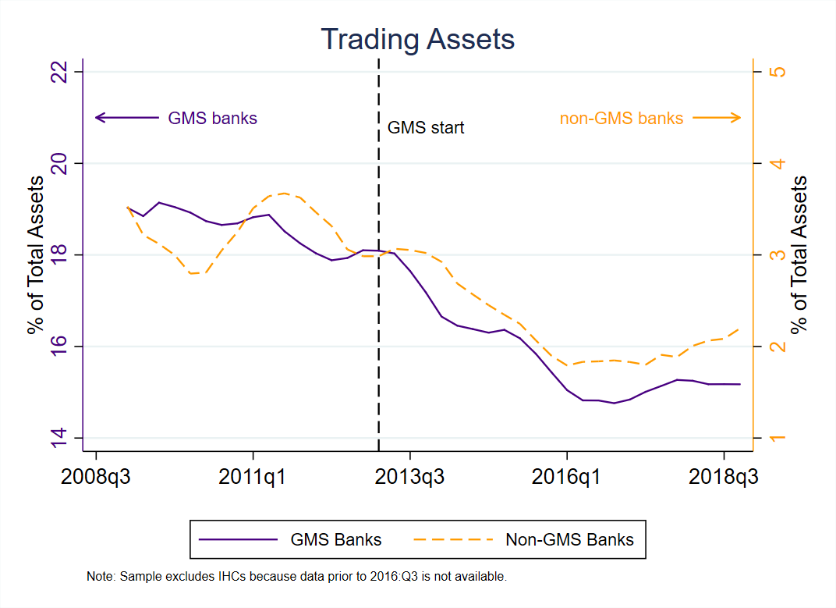 In the next step of the analysis, we estimate the effect on trading exposures of subjecting a bank to the GMS in the stress tests.  The chart below displays the estimated impact of the GMS to banks’ holdings of trading assets and liabilities, along with 95 percent confidence intervals constructed using standard errors clustered at the bank level.  We examine the impact of the GMS on: (i) trading assets, (ii) trading assets & liabilities, and (iii) debt securities.  All series are normalized by total assets.  The impact in the year prior to the introduction of the GMS in the stress tests is normalized to zero, thus all estimates are obtained relative to 2012. In the years prior to the introduction of the GMS, the trends in trading assets, trading assets & liabilities, and debt securities are not statistically different from zero between GMS and non-GMS banks.[1] 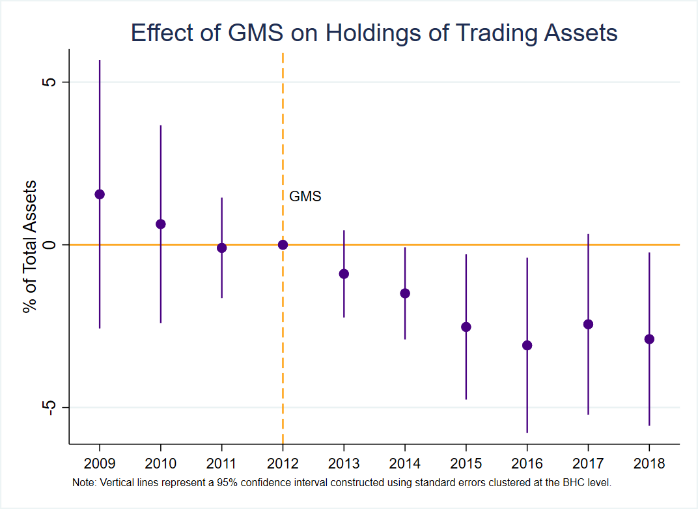 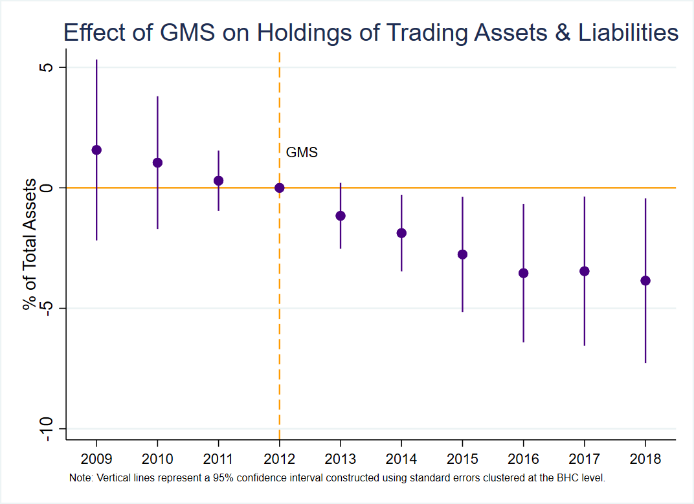 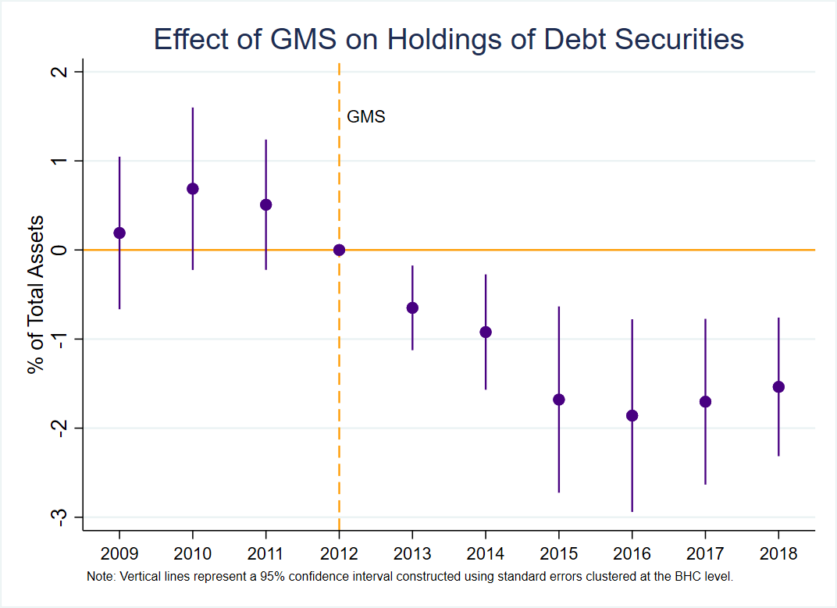 The most important driver of the decline in trading assets is the item “debt securities,” which includes corporate bonds and other debt securities.  As shown in the chart above, banks subject to the GMS reduced their holdings of other debt securities by two percentage points, after controlling for banks’ characteristics.  GMS banks hold approximately 3.5 percent of debt securities as a share of total assets, thus a two percentage point decline in the ratio of debt securities to total assets is equivalent to a decline of two-thirds in that ratio, which represents a very large impact.  This result suggests that it is not just the Volcker Rule that is having the unintended consequence of reducing the liquidity in the corporate bond market.  Moreover, the most stringent GMS occurred in the 2016 DFAST/CCAR, which coincides with the year in which our model indicates the impact to have been the strongest to date.

In summary, this note assessed the impact of the GMS on banks’ holdings of trading assets to explain the decrease in bond market liquidity in the post-crisis period.  Our results show that subjecting banks to the GMS reduced their holdings of debt securities by approximately two-thirds.  Because the sample includes only the banks subject to the Volcker Rule, it provides a strong indication that the GMS is the main driver of our results.  As a result, the Federal Reserve should revisit some of the assumptions embedded in the GMS to mitigate its impact on bond market liquidity.  Some of the important changes include providing a more empirically-based GMS scenario, ensuring consistency between the GMS and the macroeconomic stress scenario, and eliminating the duplicative losses that occur under the GMS and the macroeconomic scenario.

[1] In DFAST/CCAR 2019, 12 banks are subject to the GMS, however in prior stress test exercises only six banks were subject to the GMS.  Six intermediate holding companies (IHCs) of the U.S. operations of foreign banks were subject to a less extreme version of the GMS in DFAST/CCAR 2018.  We excluded the IHCs from our analysis because their FR Y-9C data is only available after the third quarter of 2016 (inclusive) and the exercise requires a consistent time-series of trading assets and subcomponents that goes back to the first quarter of 2009.

[3] Other trading assets include, for instance, commodity contracts and equity securities.

Consistency in Risk Weights for Corporate Exposures Under the Standardized Approach January 10, 2022
More Posts by This Author
Bank Capital and Stress Testing