On February 6, the Federal Reserve published the macroeconomic scenarios to be used in CCAR 2020.[1] The Federal Reserve’s stress tests have become an important driver of the capital levels for banks subject to the exercise, and the severity of the severely adverse scenario and the global market shock (GMS) play crucial roles in determining the overall stringency of the stress tests. Our analysis indicates the severely adverse scenario is tougher than last year’s scenario, but less severe than the scenario used in the 2018 stress tests, which was the most stressful scenario to date.

This year’s stress scenario captures a severe global recession accompanied by vulnerabilities in commercial real estate and corporate debt markets. Specifically, this year’s stress tests include on a start-to-stress basis:

As shown in Figures 1 and 2 below, the aggregate severity of the economic downturn in this year’s stress test is more severe than in CCAR 2019 across a variety of metrics. The start-to-trough increase in the unemployment rate is 6.5 percent in the 2020 stress scenario, larger than the 6.2 percent increase assumed in last year’s stress scenario. Similarly, real GDP falls by more than in last year’s test, there is a larger decline in the house price index.  Moreover, there is a higher increase of the BBB spread, but only because those spreads are tighter before the start of the 2020 stress tests.

The table below lists the changes in other important variables included in the severely adverse scenario to show some additional features of the CCAR 2020 stress scenario. First, the 10-year Treasury yield is projected to decline just 70 basis points in the first year of the test.  In prior years, with the exception of 2018, the scenarios assumed a larger decline in long-term interest rates ranging from 120 to 190 basis points. This is important because banks have significant holdings of longer-term fixed-rate government securities which experience an increase in value when long-term interest rates fall; that increase helps offset some of the losses in banks’ loan and trading portfolios.  Second, the market volatility index, or VIX, also increases rapidly in the first year of this year’s test, which will likely put additional pressure on banks’ noninterest income in the first year of the planning horizon. In contrast, the scenario assumes a faster decline in the BBB spread in the second year of the test, which is expected to reduce loan losses and provide a boost as firms enter the recovery period. 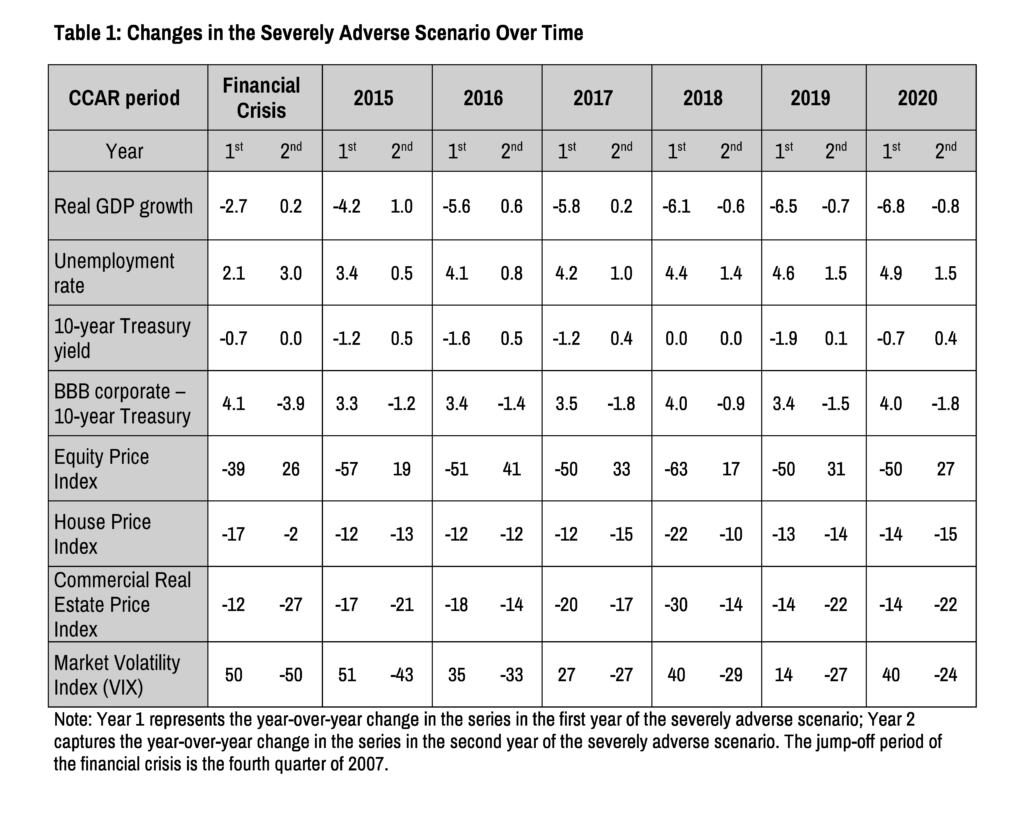 Top-Down Analysis. Looking at the trajectories of the macroeconomic variables over the 9-quarter stress horizon provides an incomplete picture of the impact of the severely adverse scenario on bank performance. In practice, the overall decline in GDP, for example, does not have the same impact on banks’ pre-tax net income under stress as the rise in the unemployment rate; thus, the severity of each variable included in the scenario is not equally important in assessing banks’ performance under stress.

Thus, to more accurately assess the implications of the different macroeconomic variables on bank performance it is also important to estimate the impact of the severely adverse scenario on banks’ projections of loan loss provisions, pre-provision net revenue (PPNR), pre-tax net income, and return-on-assets. The projections used in the note are created using top-down models that relate a subset of the variables included in the supervisory scenarios to industry-level bank performance measures (see here for details on the models used). The aggregate series include the top 35 bank holding companies that file the FR Y-9C regulatory report each quarter. Importantly, the models are updated each year, but all projections use the same set of models. Thus, changes in projections over time capture the yearly changes in the severely adverse scenario. 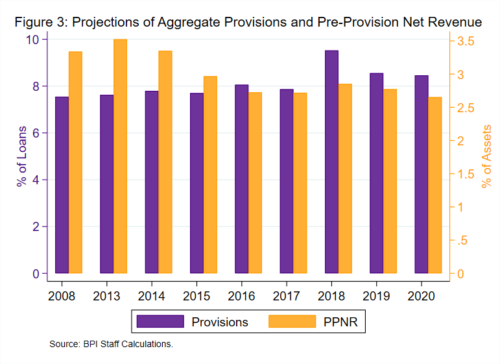 Figure 3 shows the projections for aggregate provisions and PPNR under the severely adverse scenario between 2013 and 2020.  The projections of provisions (higher values reflect larger losses) and PPNR (higher values reflect more revenues) under the economic conditions that prevailed during the financial crisis are also reported for reference. The projections for loan loss provisions – represented by the purple bars – show that the CCAR 2020 severely adverse scenario is about as severe as the CCAR 2019 scenario and also considerably more stressful than the past financial crisis.  The nine-quarter cumulative loan loss provisions are projected to be 8.5 percent in CCAR 2020, about the same as in last year’s tests. Although the start-to-stress change in some of the macroeconomic variables that drive the projections for loan loss provisions reflect a more stressful scenario, there is a faster recovery in the BBB spread which helps offset some of the increase in severity of other variables. Moreover, the BBB spread reaches the same peak of 5.5 percent in CCAR 2019 and 2020. The PPNR projections – represented by the orange bars – are slightly lower based on the path of the macroeconomic variables included in this year’s scenario, mainly due to the tougher paths of some of the financial variables included in the scenario.

Final remarks. Our analysis indicates the severely adverse scenario remains very severe and is tougher than last year’s test. It is difficult to pinpoint exactly how much more severe CCAR 2020 will be relative to last year’s test for several reasons. First, the top-down models used are unable to accurately assess the impact of changes in long-term rates on banks’ capital positions, especially for banks in which unrealized gains and losses on available-for-sale securities impact regulatory capital (i.e., the advanced approaches banks, for which the accumulated other comprehensive income filter is not available). Another source of uncertainty is the path of the VIX in this year’s scenario. In our aggregate top-down models, changes in the VIX have no impact on the projections of pre-provision net revenue, which could lead to an overstatement of bank revenues in the first year of the stress tests. Lastly, the Fed has not yet published the shocks to the risk factors that are included in the GMS, which could have a sizable impact on the overall performance of banks with significant trading operations.

[1] As of the time of the publication of the blog post the global market shock had not yet been published by the Federal Reserve on its website.