Washington, D.C. – Zelle, the bank-owned peer-to-peer payment platform, has a lower share of disputed transactions than its nonbank P2P competitors such as PayPal, Venmo and Cash App. Disputed transactions, including allegations of fraud, make up 0.06% of Zelle transactions on average, based on 2022 survey data from eight of the largest U.S. consumer banks. This share is the lowest across the major P2P payments platforms, contrary to misconceptions circulated in some media reports. For this purpose, a “disputed transaction” is one in which the bank’s customer contacts the bank to claim the P2P transaction was fraudulent or unauthorized during the first half of 2022.

“Banks know their customers, and this data should come as no surprise to anyone familiar with banks’ rigorous security standards and screening processes,” said BPI CEO Greg Baer. “Banks provide the safest route for moving money from point A to point B without sacrificing speed and convenience. This data reaffirms why customers trust banks to protect them from fraud.” 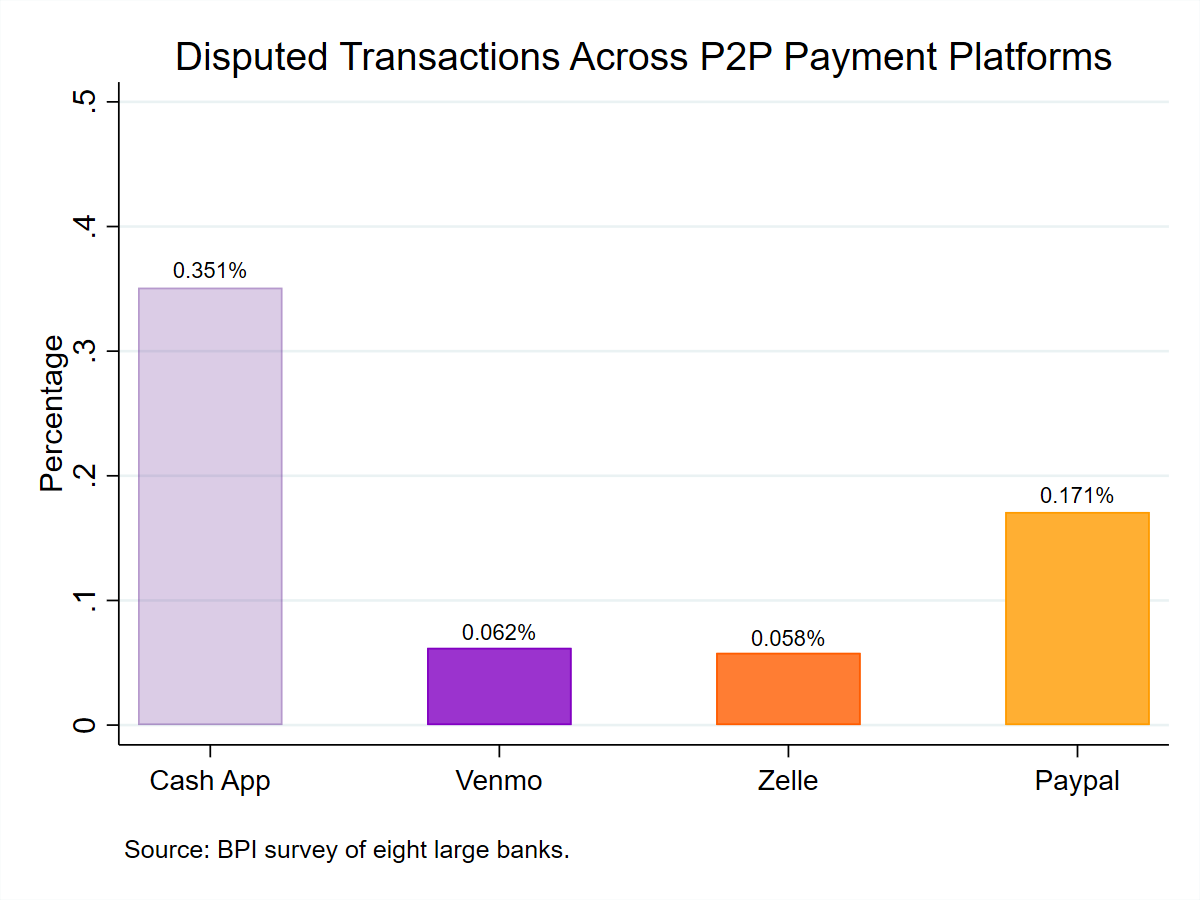 How banks keep payments safe: Zelle requires that customers already have a bank account, so banks’ know-your-customer requirements apply. In contrast, apps like Cash App allow customers to set up accounts without going through all the screening processes that banks deploy. Nonbank apps make it easier for fraudsters to set up accounts that look like legitimate sellers or merchants.

As a result, bank customers express high rates of satisfaction with their banks’ handling of fraud. According to a Morning Consult survey conducted in August, almost 9 out of 10 adultswho have been victims of fraud were satisfied with their bank’s response (89%).

What could be done? The primary focus of policymakers should be to reduce fraud, not to reallocate the resulting losses while fraudsters keep their gains.  To mitigate fraud risk among nonbank payment platforms, regulators should reduce fraud by subjecting firms like data aggregators that store and use consumer financial data to more stringent data security and consumer privacy protections consistent with those applicable to banks. Federal regulators should work together to crack down on phone “spoofing,” in which fraudsters trick consumers by making calls appear to be from a legitimate institution like a bank or government agency. Customers are understandably fooled when a telephone call shows that the caller is their bank, but banks are powerless to prevent this trick; it is up to the federal authorities and the telecommunications companies to do so.  Lastly, regulators should coordinate with law enforcement and other government agencies, community groups and the industry to root out criminals exploiting these platforms for fraud.