The Banking Industry is Unconcentrated, and Will Remain So After the BB&T/SunTrust Merger

On February 7, BB&T and SunTrust announced a merger of equals that is expected to be completed at the end of 2019.  The combined entity will have a new name that will be announced at a future date and will become the 8th largest U.S. bank holding company with $442 billion in total assets. This blog post examines the potential impact of the merger from a concentration perspective.

As background, a firm is said to enjoy economies of scale when it can reduce its costs of providing products or services to its customers by increasing its size.  Not all industries are able to benefit from economies of scale, but those scale economies arise naturally in the banking sector because typically larger scale leads to more diversification and helps reduce risk.  In addition, recent changes in technology (e.g., real-time payments, artificial intelligence) have further increased the efficient scale in banking.  However, some argue that higher scale economies will lead to an increase in market concentration in banking over time.

The remainder of this blog post shows that the banking industry is unconcentrated, with a concentration index that is well-below the average of all publicly traded firms, and furthermore it shows the BBT/STI merger will have an insignificant impact on concentration of the banking industry.  The most commonly used measure of market concentration is the Herfindahl-Hirschman Index (HHI).  The HHI is calculated by summing the squares of the individual firms’ market shares, and thus gives proportionately greater weight to firms with larger market shares.  The value of the index approaches zero when an industry consists of many small firms, while it reaches a maximum value of 10,000 when the market is controlled by a single firm.  The Department of Justice (DOJ) considers a market unconcentrated if the HHI is below 1500, moderately concentrated if the HHI is between 1500 and 2500 and highly concentrated if the HHI is above 2500.  In evaluating the impact of a merger, the DOJ also looks at the increase in the HHI that results from the merger. 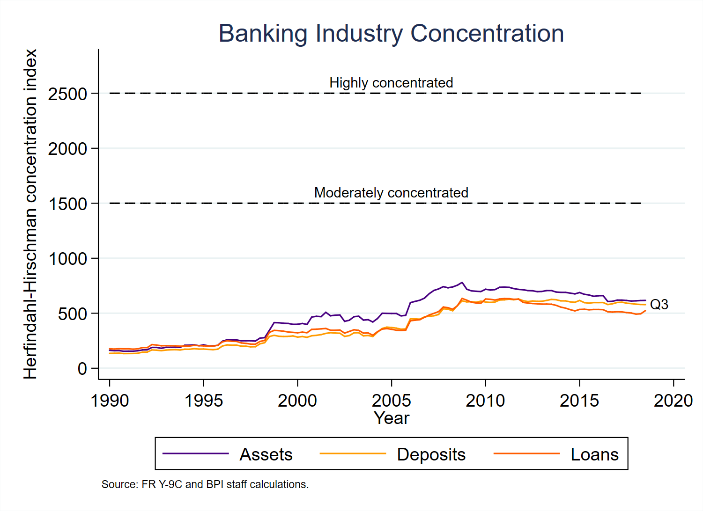 In summary, the proposed BBT/STI merger will help the combined company expand their investment in technology and deliver more and better services to its customers.  As shown above, the proposed merger has a minimal impact on the degree of concentration of the banking industry.

Five Important Facts about the Competitiveness of the U.S. Banking Industry February 24, 2022
Bank Activities and Structure

Banks Thrive at Scale, and So Do Consumers February 10, 2022
Bank Activities and Structure

When Consistency is Not Foolish: A More Sensible Approach To Granting Fed Accounts and Paying Interest on Reserves June 14, 2021
More Posts by This Author
Digital Assets