So, What Have We Just Learned About…the Countercyclical Capital Buffer

The countercyclical capital buffer (CCyB) is an additional capital requirement for large, internationally active institutions that in the United States can vary between zero and 2.5 percentage points, with 0 being the setting in normal times. The purpose of the CCyB is, of course, that it be countercyclical, but, as discussed in this note, what that means, precisely, is not always clear and means different things to different people.

Those of us attempting to design countercyclical regulatory policy in the wake of the 2007-09 financial crisis all had roughly the same narrative in our heads. The loss experiences of mortgages by vintages (see below) suggested that capital requirements should have been tighter in 2005-06 when those bad loans were being made and easier in 2008-09 when lending terms tightened up. 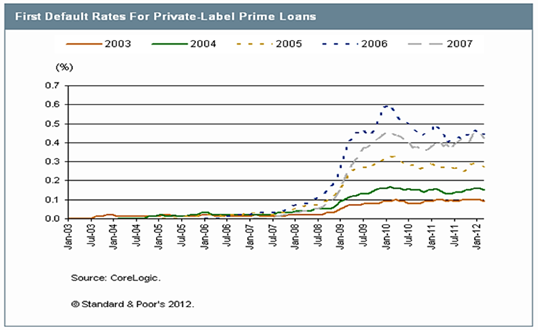 That concept underlies the design of the CCyB (CECL too, but we can flog that dead horse again another day). The Fed’s Regulation Q indicates that the Fed would set the CCyB to a level above zero:

There is now widespread agreement that if the CCyB were positive in the United States going into the pandemic crisis, it would have been appropriate to lower it at the onset of the crisis.[1] Indeed, the Bank of England, which sets its CCyB to 2 percent rather than zero in normal times, lowered its CCyB to zero in reaction to the pandemic. Ten countries, in total, have reduced their CCyBs. In the United States, banking agencies have taken steps to make banks more comfortable using their capital conservation buffers (a static buffer of 2.5 percentage points) and to encourage the largest banks to be willing to dip into the extra capital buffers they are required to maintain.

Unambiguously, however, by the Regulation Q criteria, the CCyB should have been raised, not lowered, at the onset of the crisis. The risk of above-normal losses for large banks increased, as did systemic vulnerabilities. Consider, for example, Chair Powell’s remark at the March 15, 2020, post-FOMC press conference

Q: Are risks to financial stability rising, given all the stress that’s happening in financial markets?

POWELL: Well, yes. I would say, you know, that’s something that happens when markets are as volatile as they are, when you’re having these big market movements while markets are trying to understand what’s going on, they’re trying to reach a view in high uncertainty. And that’s why you see lots and lots of volatility. I think there’s more risk to financial stability in an era like that than there is when things are really placid and, you know, we’re going home at 4:00 and kind of bored over here. That’s not the case right now. So financial stability – I would say those risks do rise in a time of high volatility, particularly a time where we’re presented with a challenge that is kind of unique, really. It’s not something we’ve all done before.

There is another popular narrative for the setting of the CCyB that is simply “raise the CCyB when times are good and lower it when times are bad.” While that approach is not consistent with Regulation Q, it is consistent with our instincts that the CCyB should be cut now and other actions that the banking agencies are taking. However, such an approach boils down to simply using the CCyB as an additional tool to manage the macroeconomic cycle. The CCyB is intended to be a “macroprudential” tool for managing the credit cycle, not the business cycle. Indeed, the Basel Committee guidance on how the CCyB should be set says explicitly “…the buffer is not meant to be used as an instrument to manage economic cycles or asset prices. Where appropriate those may be best addressed through fiscal, monetary and other public policy actions.” (p.3) (emphasis added)   If the Federal Reserve intends to use bank regulation as a tool to manage the macroeconomic cycle, then, at a minimum, it needs to put its intentions out for public comment.[3]

The rules for setting the CCyB are focused on the benefits (left) side of equation (1). When the probability or the potential costs of a financial crisis go up, the equation indicates that capital requirements should go up. Perhaps the missing criterion for setting the CCyB lies on the “cost” side of the calculus for optimal capital requirement levels. During some periods, the impact of reducing bank credit on the level of economic activity (the last term in the equation) is much higher than normal. In those periods, the optimal capital requirement level that solves the equation is lower, indicating that it would be appropriate to lower the CCyB.

For example, the fall of 2008 was another period when both systemic risks and the risk of elevated bank losses were rising, but the consensus is that a cut rather than an increase in the CCyB (had there been a CCyB) would have been warranted. As explained in the briefing books the Fed staff prepared for the September and October 2008 FOMC meetings, Fed staff concluded that the unique circumstances required them to override their normal models of the economy and adjust the forecast downward to account for financial turmoil and reduced bank credit availability. In October 2008, staff estimated that financial turmoil and lower credit supply would reduce the level of GDP by 2¾ percent in 2008Q4, 3¾ percent in 2009Q4, and 2½ percent in 2010Q4.

Similarly, the ongoing pandemic has raised the marginal importance of bank credit for economic output. In current circumstances, the availability of bank credit to the large numbers of businesses and households facing a temporary loss of income is critical for reducing the economic consequences. Consequently, the optimal level of capital requirements is lower, consistent with the view that now would be a good time to reduce the CCyB. (A similar justification could be made for the BoE’s reduction in the CCyB when Brexit was looming.)[4]

Thus, if the U.S. had a CCyB that could go negative or was, on average, positive, there could be a second criterion for setting it. In particular, the CCyB should be reduced when:

Such a criterion is in the spirit of the Basel Committee guidance for lowering the CCyB:

Principle 4: (Prompt release) Promptly releasing the buffer in times of stress can help to reduce the risk of the supply of credit being constrained by regulatory capital requirements.

However, the wording of the Basel guidance indicates the “time of stress” would follow a time of building systemic risk that would have warranted increasing the CCyB so that the CCyB could be “released” when the time of stress occurred. Similarly, the Bank of England’s rules for the CCyB indicate that it should be lowered when risks “crystalize.” And the Board’s Regulation Q states that the Board would reduce the CCyB “when the conditions that led to its activation abate or lessen.”

All of these descriptions of how times of stress can crystalize are motivated by our understanding of the 2007-09 financial crisis, when the severe stress occurred because of losses on investments made over prior years of slack lending standards and defective securitizations. That understanding lead to the assumption that the conditions warranting a reduction in the CCyB will always follow conditions warranting an increase. The onset of the coronavirus pandemic has provided a devastating demonstration that the assumption that financial stress always follows financial excess is false.

Recognizing that situations will arise when it is appropriate to lower the CCyB that do not follow periods when the CCyB has been raised, the United States should allow the CCyB to not only be raised to 2.5 percent, but to also be lowered to -1.0 percent. A negative CCyB would be called for when condition 2 above was met: “The negative impact on economic activity of restricting bank credit is meaningfully above normal.” Alternatively, as recommended by Vice Chair Quarles in a speech last September, the United States could adopt the U.K. approach of having the CCyB set to 1 or 2 percent rather than zero in normal times. Increasing the normal level for the CCyB, however, would require making other, potentially difficult, and significant adjustments to capital requirements and/or stress tests to prevent an unintended and suboptimal increase in requirements in normal times.

Current circumstances also illustrate that condition 2 and condition 1 will often be in conflict. Bank credit will often be most valuable and scarce precisely when financial turmoil and economic distress raise the prospect of elevated bank losses. This conflict is not new. A similar tension existed in the late 2008-early 2009 period discussed above (when macroprudential theorists imagine a CCyB would have been lowered), and the challenge for regulators of lowering capital requirements when risks are elevated is a widely recognized problem for the successful implementation for the CCyB. The fact that 10 countries have lowered their CCyBs in response to the pandemic illustrates, however, that it is a challenge that can be overcome.

Current circumstances also highlight an advantage of being able to lower the CCyB even when it hasn’t been raised: The situations that call for lowering the CCyB generally do not require the ability to predict the future.

[1] There are very few exceptions, though perhaps more politically than conceptually based. Cite: https://finance.yahoo.com/news/the-mystery-behind-the-feds-refusal-to-suspend-bank-dividends-131547657.html ; https://www.ft.com/content/0b944cd4-7f01-11ea-b0fb-13524ae1056b

[3] Also, if it is a macroeconomic tool, then it is difficult (impossible?) to understand why it would apply only to the largest banks, or just to banks. (While most non-banks have no capital requirement, government-sponsored enterprises and securities firms do, and effectuating a macroeconomic purpose would seem to argue for including them.)

[4] There was also a period during the sluggish recovery of the 1990s following the adoption of Basel 1 when the Fed staff’s forecast of business fixed investment was reduced if the bank credit forecast didn’t generate the necessary funding.