Skip to content
Close
Home / About Us/ Leadership/ Tim Spence 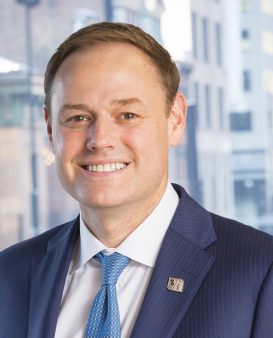 Tim Spence serves as president of Fifth Third Bancorp. He leads all the Bank’s business lines and regions, as well as the Bank’s strategy. In April, the Bank announced that Tim will succeed Greg Carmichael as the Company’s chief executive officer, starting July 5.

Before being named president in 2020, Tim held several roles in Fifth Third’s senior leadership. He joined Fifth Third in 2015 as chief strategy officer. In 2018, he was named head of Consumer Bank, Payments and Strategy, responsible for key strategic growth areas such as digital, marketing, strategy and fintech partnerships.

Tim was integral in developing Project NorthStar, the Bank’s five-year strategy to improve performance through business cycles. He also played a key role in the Bank’s merger with MB Financial, its largest acquisition in 20 years. He has spearheaded the Bank’s “buy-partner- build” strategy toward fintech companies, including recent acquisitions of Provide and Dividend Finance, and in 2018 he was named The American Banker’s Digital Banker of the Year.

Before joining the bank, Tim worked as a senior partner at the consulting firm Oliver Wyman, advising executives at large financial institutions on matters of strategy and operational performance.

Tim earned a bachelor’s degree in English literature from Colgate University with a minor in economics.

Tim has served on the boards of the Consumer Bankers Association, Miami University’s Altman Institute for Entrepreneurship, the Cincinnati USA Regional Chamber’s Restart Task Force and Cintrifuse, a public-private tech entrepreneurship partnership. In May 2022, he was named a trustee of Cincinnati’s Xavier University, effective July 1.

Tim is a founding member of Fifth Third’s Enterprise Diversity Leadership Council, established in 2020, and is the executive sponsor of the African American Business Resource Group.