Skip to content
Close
Home / About Us/ Leadership/ René Jones 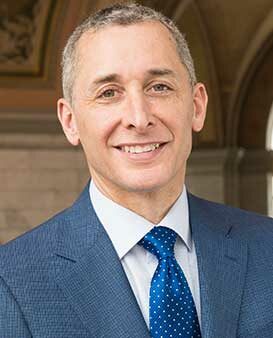 René F. Jones is Chairman and Chief Executive Officer of M&T and its principal banking subsidiary, M&T Bank. He was elected to this position, and to the Board of Directors of M&T and M&T Bank, in December 2017.

Jones joined M&T Bank in 1992 as an Executive Associate and went on to hold a number of management positions. He served as M&T’s Chief Financial Officer from 2005 to 2016.  He was appointed to the Management Committee in 2005 and was named Vice Chairman in 2014.

Before joining M&T Bank, Jones held numerous positions at The Group Inc. He began his career with the Boston-based office of Ernst & Young, where he serviced clients in a variety of industries with a primary emphasis on Financial Services. It was at this time Jones earned his designation as a Certified Public Accountant (CPA).

Jones received a Bachelor of Science (BS) in Management Science from Boston College and a Master of Business Administration (MBA) with concentrations in Finance, Organization and Markets from the University of Rochester’s Simon School of Business.

An active member in the community, Jones serves on the boards of ACV Auctions, Burchfield Penney Art Center, Jacobs Institute and Massachusetts Historical Society. He is also on the Federal Reserve Bank of New York’s Federal Advisory Council, Aux21 Capital Advisory Board and University at Buffalo Council.

He was recognized by Canisius College as Outstanding Accountant in Western New York in 2016 and listed among “All-American Executive Team: Best CFOs” by Institutional Investor in 2012.