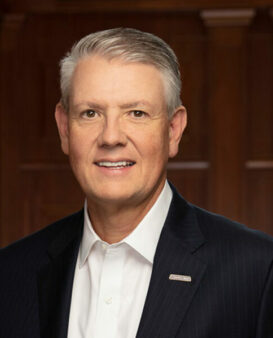 Curtis C. Farmer is chairman, president and chief executive officer of Comerica Incorporated and Comerica Bank. He also serves as a director of both organizations and leads Comerica’s Management Executive Committee.

Farmer joined Comerica as executive vice president of Wealth Management in 2008. He was named Vice Chairman of Comerica’s Retail Bank and Wealth Management divisions in 2011, and President, Comerica Incorporated and Comerica Bank in 2015. Curt was appointed as Chief Executive Officer in April 2019, and assumed the role of Chairman on Jan. 1, 2020.

Farmer joined Comerica from Wachovia Corporation of Charlotte, N.C., where he served as Executive Vice President, Wealth Management from 2005to 2008. During his 23 years with Wachovia, he held a variety of positions of increasing scope and responsibility.

Farmer holds a bachelor’s degree from Wake Forest University, where he also earned his master’s degree in business administration.

Farmer’s board affiliations include Wake Forest University, The Clearing House and the Circle 10 Council of the Boys Scouts of America, where he currently serves as President.