Top of the Agenda

In a new blog post published on May 15, BPI argues why it would be bad public policy for the Federal Reserve Board to mandate a blanket halt to dividends by U.S. banks. In short, a governmental ban on bank dividends would:

The post concludes that those advocating for government-mandated dividend halts for banks (and only banks) appear to have adopted an “if it ain’t broke, let’s break it” approach to bank regulation. While perhaps politically appealing, such an approach is bad policy and a repudiation of the good work that both regulators and banks have done since the last financial crisis. Learn More >>

The Paycheck Protection Program (PPP) has been instrumental in mitigating the adverse economic effects of the COVID-19 pandemic, but despite tremendous success evidenced by program statistics and heartwarming stories from small businesses across the nation, myths persist among the media and policymakers based on a somewhat chaotic “phase 1” of the program. BPI analyzed near-final data on the program, and sought to set the record straight in a new blog post titled “The Paycheck Protection Programs: Will Facts Overcome Myths?”

The post cites a study published earlier in the week by BPI, which examined the cumulative effects of the PPP. Results demonstrated that the program has been successful in aligning the flow of credit toward areas most affected by Covid-19. Specifically, there is a strong, positive correlation across states between disruption of economic activity and dollars disbursed per small-business employee (Figure 2). 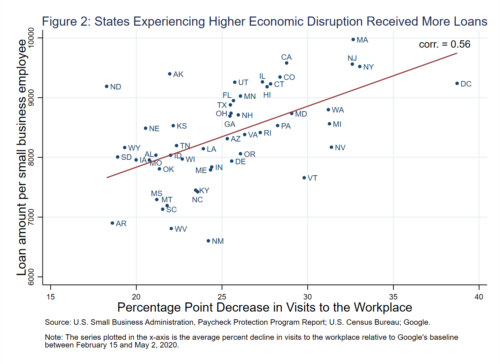 In addition, contrary to preliminary assessments criticizing large banks for inadequate participation, the data show that large banks managed a broad distribution of PPP funds. In fact, more dollars per small-business employee have been disbursed in states with more large banks, as measured by their share of retail deposits in that state. (Figure 3). 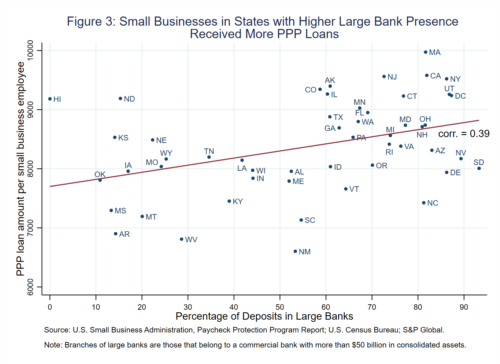 The results of this research are consistent with a BPI survey of the nine largest retail banks that showed the average loan size for these banks was $115,000 (smaller than the program average of $130,000) and 75 percent of all loans went to businesses with fewer than 10 employees. Learn More >>

Following opening remarks from Chairman Mike Crapo and Ranking Member Sherrod Brown, Vice Chair Quarles testified on the targeted changes to capital that were implemented by the Fed, which allow banks to use their balance sheets more effectively to support customers and the functioning of the financial markets. “Because of these measures, and the strong foundations on which they were built, banking organizations are well-positioned to serve as a source of strength, not strain, in the current crisis,” Quarles said. Quarles reiterated these remarks the following day before the House Subcommittee on Consumer Protection and Financial Institutions, adding that “[banking organizations] have been able to process a flood of transactions from investors responding to higher volatility. And as a conduit for official-sector support, they have helped stabilize the financial system and restore market function.”

During the Senate committee Q&A, Senators focused on support for minorities and underserved communities during the coronavirus pandemic. Chairman Mike Crapo expressed concern over the Federal Reserve’s municipal lending facility population thresholds that could impede access to smaller rural communities. Regarding the Paycheck Protection Program (PPP), Senator Menendez asked about formal guidance to banks regarding fair lending; Comptroller Otting said the OCC sent a bulletin encouraging banks to track their lending activity, including in underserved and rural areas.

Comptroller Otting faced criticism from Democrats for the current CRA proposal. “I’ve spoken to no one who supports your CRA proposal,” said Senator Brian Schatz. When asked by Senator Menendez if the CRA rewrite should be postponed given the current pandemic, Comptroller Otting suggested it should, in fact, be accelerated. Chairman Crapo concluded the hearing by acknowledging that while there is a disagreement on the CRA solution between parties, there is not a disagreement about the need to address the issue. Learn More >>

Efforts underway at the Federal Reserve to implement economic relief measures are being hindered by tier 1 leverage ratio requirements, according to a Risk Magazine article published on May 12. In April, the Federal Reserve issued an interim final rule allowing banks to temporarily exclude deposits at the Federal Reserve and U.S. Treasuries from the denominator of the supplementary leverage ratio. The exclusion of those risk-free assets did not extend to the denominator of the tier 1 leverage ratio. As a result of the large inflows of deposits to the banking sector in the first quarter, “[s]ome of the banks are managing their Tier 1 leverage ratio very carefully, and they are already facing significant constraints on how to deploy their capital to best serve the needs of their customers,” stated Francisco Covas, Head of Research at BPI.

As we move well into the second quarter, the tier 1 leverage ratio requirement is becoming a more binding constraint as a result of the implementation of the Fed’s new emergency lending facilities and their quantitative easing program. “The Fed’s new approach to monetary policy, the federal government’s economic stimulus, and the resulting massive increase in reserves and Treasuries are creating a situation where it’s becoming obvious to policy-makers that it doesn’t make sense to require banks to hold capital against those assets. In the U.S., Treasuries are really risk-free assets,” added John Court, General Counsel at BPI. Learn More >>

BPI Executive Vice President and President of BITS, Chris Feeney, participated in a panel discussion hosted by Palo Alto Networks on May 14 alongside representatives from MIT Sloan, the FBI and BCG Platinion. The panelists discussed cyber risks associated with a remote work environment and highlighted several common risks businesses may experience, including business email compromise, “zoom-bombing,” and ransomware attacks. Chris also described the benefits of industry collaboration through trade associations like BPI and information sharing initiatives, which have contributed to the fact that the financial services industry has not seen a surge in cyberattacks since the transition to remote work.

Douglas Holtz-Eakin, President of the American Action Forum (AAF), released a new blog post titled “In Defense of the PPP” on May 14, arguing that despite “public shaming and Monday-morning quarterbacking,” the PPP “is the best part of the CARES Act,” having successfully distributed $531 billion in relief funding to small businesses to help support the economy. Holtz-Eakin argues that without the PPP program, the 20 million job losses recorded in April could have resulted in “further carnage” and that despite some weak points, the program has done enormous good.

Wall Street Journal Reporter Ben Eiser describes the perils of nonbank mortgage servicing in a recent article titled “The Mortgage Market Never Got Fixed After 2008. Now It‘s Breaking Again.” The article traces the market shift from traditional bank lenders to nonbanks and the risks associated with the growth of nonbank lenders, which lack diversification and rely heavily on short-term financing to facilitate their operations. BPI detailed why this transition is occurring in a 2019 research note, which states:

[T]he rise in the role of nonbanks has raised concerns because all the mortgages for which nonbanks collect payments are insured or guaranteed by the federally guaranteed GSEs and Ginnie Mae and therefore the failure of nonbanks in the next downturn could put taxpayers at risk. Moreover, the thin capital and liquidity cushions of nonbank servicers may also result in excessive foreclosures during the next crisis.

Furthermore, BPI proposed the following change for regulators in 2019, which now seems urgent:

European financial regulators may be considering subjecting financial institutions to new cyber stress tests according to an internal document between European Commission staff and E.U. treasuries obtained and reported on by POLITICO. According to the report, these new authorities would measure an institution’s risk management strategies — tailoring the measurements based on an institution’s size — and could include auditing and oversight of third-party cloud providers (e.g, Amazon Web Services, IBM Cloud). The document is not officially public; however, if the agency staff choose to move forward with the recommendations, the changes would require approval from individual E.U. national governments.

Though U.S. regulators do not conduct formal stress testing related to cybersecurity, firms implement internal auditing and monitoring procedures as a matter of best practice in order to test for vulnerabilities and to ensure adequate cyber hygiene standards are being met. The Federal Financial institutions Examiner Council (FFIEC) — an interagency body responsible for establishing principles and standards for the examination of financial institutions — recently issued a joint statement titled “Security in a Cloud Computing Environment,” which outlines expectations for financial institutions to ensure that relationships with third-party vendors are safely being managed and adhering to contractual requirements.

The FDIC issued a notice of proposed rulemaking that would mitigate the deposit insurance assessment effects of participating in the Paycheck Protection Program (PPP), the Paycheck Protection Program Lending Facility (PPPLF), and the Money Market Mutual Liquidity Facility (MMLF). Under the proposed rule, an insured depository institution (IDI) would generally not be subject to a higher deposit insurance assessment rate solely due to its participation in the PPP, PPPLF, or MMLF.

The NPR notes that changes to the Call Report and the FFIEC 002 (Report of Assets and Liabilities of U.S. Branches and Agencies of Foreign Banks) will be made in coordination with other members of the FFIEC, and includes three alternatives on which the agency requests comment. These are: leave in place the current assessment regulations; require that institutions report PPP loans as a separate loan category; and, exclude the effects of participation in the MMLF from measures used to determine an IDI’s deposit insurance assessment rate.

The CFPB released a statement and FAQ on May 13 encouraging lenders to assist customers affected by the COVID-19 pandemic using methods such as “waiving fees, lowering minimum-balance requirements and implementing changes in account terms that benefit customers.” The CFPB also provided a statement related to billing error resolution, noting that the Bureau will take a flexible supervisory and enforcement approach regarding the timing of completing investigations of billing error notices. BPI has expressed support for making such adjustments, given the challenges due to the pandemic.