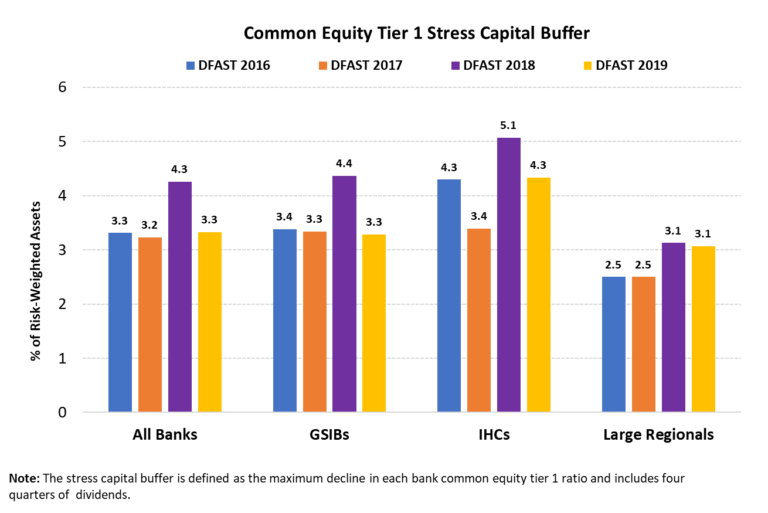 On June 24, BPI published a blog post that analyzed the Dodd-Frank Act Stress Tests (DFAST) results, released on June 21. The main takeaway of this year’s stress test is that the aggregate stress capital buffer for banks moved back to the levels obtained using results from DFAST 2016 and 2017 after the significant rise observed using DFAST 2018 projections. The improvement in bank performance was in large part driven by projected gains in available-for-sale securities and somewhat lower trading and counterparty losses. Net revenues and loan losses under stress moved back to 2016/2017 levels. However, there was a significant increase in credit card loan losses, in part driven by changes in the Fed’s own models.

On June 27, the Federal Reserve announced that it approved the capital plans of 18 of the large banks as part of the Comprehensive Capital Analysis and Review (CCAR).

Over a series of two nights – July 26 and 27th – 20 Democratic presidential candidates sparred for their first debates. The candidates focused on issues ranging from immigration, health care and climate change but did not draw a spotlight on the financial services industry

The House Financial Services Committee announced that it will hold a hearing on Facebook’s plans for a digital currency at a July 17 hearing. Committee Chairman Maxine Waters said: “Facebook has data on billions of people and has repeatedly shown a disregard for the protection and careful use of this data.” She also asked the company to agree to a “moratorium on any movement forward on developing its cryptocurrency until Congress and regulators are able to examine the issues and take action.”  The Senate Banking Committee previously announced that it would hold a hearing on July 16 on Fabebook’s planned “Libra” project with David Marcus, the head of the Facebook subsidiary overseeing Libra, set to testify.

On June 21, BPI (along with SIFMA and the ABA) submitted a comment letter in response to the FDIC’s advance notice of proposed rulemaking to tailor and improve its rule requiring large insured depository institutions (IDIs) to submit resolution plans. The letter recommends the rule be tailored, generally consistent with how the 165(d) resolution plan requirements are tailored, and recommends regular submission cycles and predictable and transparent resolution planning requirements.

An Even Better Way to Combine Stress Test Results

On June 19, BPI published a blog post presenting a new, simpler proposal for combining stress test results and one that draws some intuition from engineering and from portfolio theory in finance. We also show that the current approach will not only lead to the government allocating credit but also could result in an increase in bank risk through reduced diversification. By contrast, the approach we propose would lower bank risk by reducing leverage and would also leave credit allocation decisions by banks unchanged.

On June 25, the Consumer Financial Protection Bureau (CFPB) hosted a symposium, the first in a series, examining the “abusiveness” standard articulated as part of the Dodd-Frank Act prohibition on “unfair, deceptive, or abusive acts or practices” (UDAAP). The symposium, which included remarks by CFPB Director Kathleen Kraninger, featured two panels, each of which weighed the benefits and other considerations regarding any potential action by the CFPB to provide additional clarity on the standard.

On June 21, the International Organization of Securities Commissions (IOSCO) published a report on “Liquidity in Corporate Bond Markets under Stressed Conditions.” IOSCO reported that post-crisis reforms reduced the capacity of intermediaries to provide liquidity to traders and caused a move away from principal-based toward and agency-based-trading. This will result in less liquidity under stressful conditions and more pronounced price dislocations in bond markets, which may spill over into other markets and also damage the real economy.

On June 21, BPI (joined by SIFMA and the ABA) submitted a comment letter to the Federal Reserve and FDIC on their proposed revisions to regulations governing resolution planning requirements for banks as mandated by section 165(d) of the Dodd-Frank Act. The letter identifies several areas for refinement and clarification within the proposal’s risk-based framework for filing frequency and content requirements, recommending revisions to the proposed timing of requests, notifications and other deadlines, as well as to elements of the proposal’s requirements for the plans’ informational content.

On June 26, BPI submitted a letter to the three banking agencies for the Supplemental Reporting Instructions issued by the Fed and Federal Financial Institutions Examination Council (FFIEC) in March regarding reporting of operating lease liabilities under the new accounting standard effective January 1. Arguing that operating lease liabilities should not be reported as secured borrowings under existing regulatory reporting definitions of those terms and that the FFIEC’s interpretation would result in higher FDIC assessments for banks of all sizes, the letter urges the agencies to withdraw the instructions and reissue them for public notice and comment with the clarification that operating lease liabilities should be reported as unsecured borrowings.