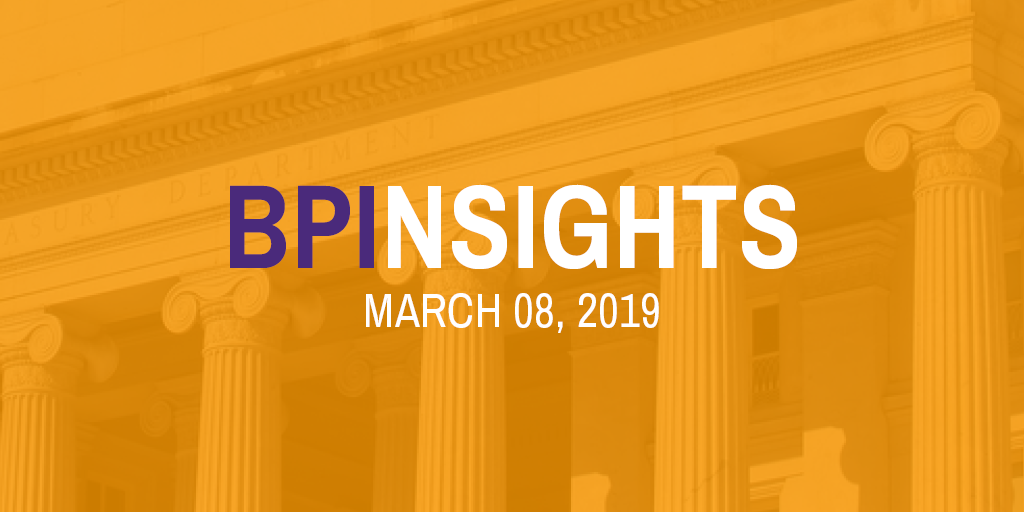 The Banking Agencies and Leveraged Lending: A Case Study in the Hazards of “Macroprudential” Regulation

On March 6, it was reported that the Financial Stability Board will investigate the leveraged loan market. Such a review is welcome and overdue. Our hope is that it will include an objective and self-critical look at the history of regulation in this area, which this blog post explores. To wit: in one form or another, the U.S. banking agencies have been warning banks of impending losses in leveraged lending for 20 years with heightened rhetoric over the last five years as they took increasingly aggressive efforts to force banks to restrict lending to growing businesses that meet the agencies’ definition of leveraged.

The question is what role the government should play in this market. For a five-year period, that role consisted of warning of an impending crash. It is difficult to see that effort as anything but a failure. This seems to be an area where Congressional oversight would appear warranted. So, too, would further research by the academic community, whether economists within the banking agencies or without.

The Federal Reserve released the instructions for this year’s CCAR exercise and concurrently issued an amendment to their Capital Plan Rule, making changes to the CCAR qualitative objection. The Federal Reserve announced that it would phase out the so-called qualitative, pass-or-fail element of its Comprehensive Capital Analysis and Review stress tests. For those that might believe this is a huge deregulatory effort, it is worth noting that this change is consistent with a suggestion from former Fed Governor Daniel Tarullo two years ago in stating, “With a few exceptions, the issues observed during recent Comprehensive Capital Analysis and Review (CCAR) cycles are less fundamental than those we were seeing even a few years ago. So I think the time may be coming when the qualitative objection in CCAR should be phased out, and the supervisory examination work around stress testing and capital planning completely moved into the normal, year-round supervisory process, even for the G-SIBs.”

Notably, for firms who have participated in CCAR for four years and did not receive a qualitative objection in year four, the qualitative assessment has been incorporate into the traditional supervisory approach. Additionally, large and noncomplex firms with $100 billion to $250 billion in assets will not be subject to company-run and supervisory stress testing for 2019. U.S. intermediate holding companies of foreign banking organizations (IHCs) with aggregate trading assets and liabilities of $50 billion or more, or equal to or greater than 10 percent of total consolidated assets, will now be subject to the global markets shock and the counterparty default scenario.

Volcker Rule Revision to be Scrapped for New Attempt

U.S. regulators are tossing their proposal for revising the Volcker Rule restrictions on banks’ trading, according to media reports. The Federal Reserve and the other regulators are working on changes to the Volcker Rule and “will likely require the agencies to re-propose the rule,” according to Bloomberg. However, no final decision has been made to fully abandon the earlier proposal. Federal Reserve Chairman Jerome Powell said in Congressional testimony last week that he heard industry concerns on the proposal and the Fed is “looking carefully” at ways to address the issues. In October 2018, BPI filed a comment letter with recommendations on the Accounting Prong of the Rule.

The Federal Reserve announced on March 6 that it will be maintaining the current level of 0% on its countercyclical capital buffer (CCyB). The CCyB is a macroprudential policy tool that allows the Federal Reserve to raise capital requirements on only the largest banking organizations when it observes heightened risks of a financial crisis. The Fed’s decision was made in consultation with the Federal Deposit Insurance Corp. and Office of Comptroller of the Currency. Fed Governor Lael Brainard dissented from the Fed’s decision. BPI research has previously argued that “the Fed’s stress tests have effectively increased capital requirements this year, so the CCyB does not need to be raised at this time, it just needs to be allowed to go below zero during a recession.”

The Federal Trade Commission proposed on March 5 to amend two financial institution-related data privacy regulations under the Gramm Leach Bliley Act. The first proposal notably changes aspects of the Privacy Rule, by reducing its application to only motor vehicle dealers as required by the Dodd-Frank Act’s transfer of rulemaking authority to the CFPB for most financial institutions. The second proposal would amend the Safeguards Rule to require institutions to encrypt all consumer data and implement controls to prevent unauthorized access, among other things. “Banks are the leaders in protecting customer information, and are already under the most stringent regulatory regime,” the Bank Policy Institute said in a statement in response to the proposals.

Bank regulators are discussing drafting a proposal that would require large banks to “defer some compensation for executives and to take back more of their bonuses if losses pile up at a firm,” according to a report by the Wall Street Journal. The Journal reported that the talks are in the early stages from at least three bank regulators: Federal Deposit Insurance Corp., Office of the Comptroller of the Currency and Federal Reserve. The compensation rules are required by the 2010 Dodd Frank Act.

The Wall Street Journal reported on community banks struggling to serve small towns as consumers demand digital services offered by big banks. “Technology is causing strains throughout the banking industry, especially among smaller rural banks that are struggling to fund the ballooning tab. Consumers expect digital services including depositing checks and sending money to friends, which means they don’t necessarily need a local branch nearby. This increasingly means people are choosing a big bank over a small one,” the Journal reported.

Get your popcorn ready! Federal Reserve Board Chairman Jerome Powell will appear for a sit down interview on CBS’ “60 Minutes” on March 10 at 7 pm.

On March 12, the House Financial Services Committee will convene a hearing at 10 am on Wells Fargo with CEO Tim Sloan testifying.

The Senate Banking, Housing and Urban Affairs Committee will convene a hearing on March 12 at 10 am on the semi-annual report to Congress by the Consumer Financial Protection Bureau with Director Kathleen Kraninger testifying.

The Senate Judiciary Committee will hold a hearing on March 12 at 10 am titled, “GDPR & CCPA: Opt-ins, Consumer Control, and the Impact on Competition and Innovation.”

On March 13, the House Financial Services Committee will hold a hearing on reauthorization of the National Flood Insurance Program.

On March 14, the House Financial Services Subcommittee on Investor Protection, Entrepreneurship and Capital Markets will convene a hearing at 9:30 am on the Securities and Exchange Commission’s Best Interest Rule.”

The Senate Banking, Housing and Urban Affairs Committee will hold a hearing on March 14 at 10 am on the Financial Stability Oversight Council nonbank designations. On March 6, the FSOC proposed changes to its guidance for nonbank designations moving to a more activities-based approach.

On March 26, the House Financial Services Subcommittee on Investor Protection, Entrepreneurship and Capital Markets will hold a hearing at 2 pm on proposals to “improve environmental, social and governance disclosures.”

The Antonin Scalia Law School’s Financial Services Regulation Law Concentration and the Law & Economics Center’s Program on Financial Regulation & Technology are hosting a forum with Federal Reserve Board Vice Chair for Supervision Randal Quarles on April 9 at 5 pm at the Law School.

The Antonin Scalia Law School’s Financial Services Regulation Law Concentration will host its first full day public policy conference on the Future of Financial Regulation on May 16. Craig Phillips, Counselor to the Secretary of the Treasury, will be the opening keynote speaker and SEC Commissioner Hester Peirce will be the luncheon speaker. Full agenda to come.

The Securities Industry and Financial Markets Association (SIFMA) and BPI will host the 6th Annual Prudential Regulation Conference on June 4 in Washington DC. This year’s conference will assess how the post-crisis prudential regulatory framework is affecting the capital markets, including market liquidity, capital formation and innovation.

The Clearing House and BPI will host the 2019 Annual Conference from November 19 to 21. The event provides a forum for the industry’s leaders to examine the changing dynamics of the bank regulatory and payments landscapes with two and half days of high-level keynote speakers, in-depth expert panels, and networking. Register today.
The Pierre, New York

Okun revisited: Who benefits most from a strong economy?

Existing research finds that disadvantaged workers experience greater cyclical variation in labor market outcomes than more advantaged workers. Using data from the Bureau of Labor Statistics’ Current Population Survey, this paper extends previous work by including the period after the Great Recession and asking whether the dynamics of the labor market response change when the market is especially tight. The authors confirm the prior finding that labor market outcomes of disadvantaged workers are more pronounced. Additionally, they find that high-pressure economies, which use resources at a rate greater than what is sustainable in the long-run, are qualitatively different than normal expansions. Outcomes improve more for less-advantaged groups in these high-pressure economies and the improvements are persistent.

Banks’ Demand for Reserves in the Face of Liquidity Regulations

This post summarizes the liquidity coverage ratio (LCR) and resolution plans, two regulations often cited by banks as the driving forces behind their demand for reserves and analyzes the correlation between these regulations and reserve holdings. The LCR requires that banks hold enough in high quality liquid assets (HQLA) to cover their projected net cash outflows over a 30-day period of stress. Resolution plans, among other things, are intended to ensure that banks have enough short-term liquidity to cover demands from stakeholders and counterparties if one of them fails. Neither regulation requires that banks hold reserves to meet their liquidity requirement, but the author finds that in both cases banks are holding sizable reserves that are correlated with the measures that determine how much HQLA each bank must hold.

Beyond LIBOR: a primer on the new benchmark rates

Following revelations of the manipulation of the London Interbank Offer Rate (LIBOR), momentum has developed for transitioning away from the use of LIBOR benchmarks. Authorities in major currency areas have begun to publish transaction-based risk-free rates (RFRs) intended to replace or complement IBOR benchmarks. This paper provides an overview of the new reference rates. The authors find that the new RFRs are robust and credible and expect that cash and derivatives markets will shift toward using the RFRs as their main benchmarks. However, financial intermediaries may require benchmarks tied more closely to marginal funding costs if they are going to use the benchmarks to manage asset-liability risk. A number of different benchmark formats may coexist in the future.

The Sensitivity of Long-Term Interest Rates: A Tale of Two Frequencies

The Long and Short of It: The Post-Crisis Corporate CDS Market

This paper examines the evolution of the credit default swap (CDS) market since the 2007 – 2009 financial crisis. The authors use data on CDS positions and transactions to document the properties of existing and new positions and study dealers’ market power when transacting with non-dealers. They find that the U.S. market for single-name CDS has shifted almost entirely from contracts not eligible for clearing through a central counterparty to those that are centrally cleared. This is in spite of the fact that the U.S. has no mandatory clearing rules for single-name CDS. They also find that, in the U.S. single-name market, clearing eligibility reduces dealers’ market power when selling to buyside customers.