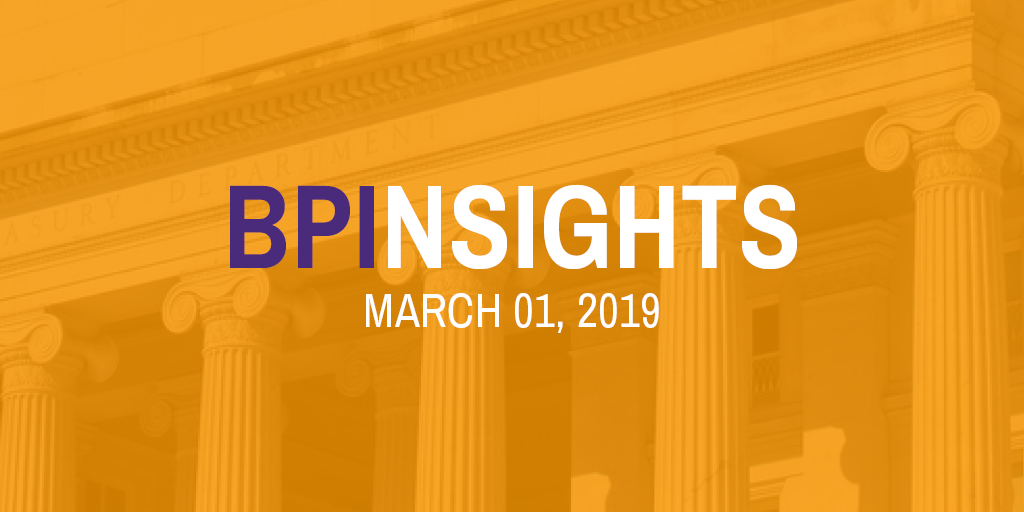 On February 27, during a hearing before House Financial Services Committee Federal Reserve Chairman Jerome Powell addressed the procyclicality of the proposed Current Expected Credit Loss (CECL) accounting standard and effects on the broader U.S. economy. Powell stated that the Fed does not believe that CECL will deter bank lending in an economic downturn, particularly to low-income borrowers, but if they find “it does have effects like that then we’ll take appropriate action.” In response to a question on CECL’s procyclical impact, he replied, “we don’t think it’ll have that effect, but we’re going to be watching very carefully.”

FASB to Vote on Regional Bank CECL Alternative on April 3

The Financial Accounting Standards Board (FASB) will meet April 3 to deliberate and vote on whether to proceed with proposed changes to its Current Expected Credit Loss (CECL) accounting standard, according to Bloomberg Law. The proposed changes are supported by a number of BPI regional bank members. FASB Chairman Russell Golden told Bloomberg that the fate of the proposal is “hard to know until we’ve had the deliberations.”

Five GOP senators, including Senate Banking, Housing and Urban Affairs Committee Chairman Mike Crapo (R-ID) and Senator Thom Tillis (R-NC), sent a letter to the Government Accountability Office asking for a determination of whether Federal Reserve guidance of large firms, particularly those imposed through the Large Institutions Supervision Coordinating Committee (LISCC), constitutes a “rule” for the purposes of the Congressional Review Act. “Determining whether LISCC guidance is a rule is particularly important because the Federal Reserve has never revealed the criteria by which certain supervised institutions become subject” to LISCC designation, the senators wrote.

House and Senate subcommittees held hearings examining proposals for a data privacy framework. On February 26, the House Committee on Energy and Commerce Subcommittee on Consumer Protection and Commerce held a hearing on data privacy where witnesses discussed the European Union’s General Data Protection Regulation (GDPR) and the California Consumer Privacy Act and the need for federal privacy legislation. There was consensus that the current system needs to be improved. On February 27, the Senate Committee on Commerce, Science, and Transportation also held a data privacy hearing where lawmakers debated creation of comprehensive national data privacy legislation.

On February 26, the Senate Banking, Housing and Urban Affairs Committee confirmed Mark Calabria by a vote of 13 to 12 to serve as Director of the Federal Housing Finance Agency. The committee also approved Bimal Patel to be an Assistant Treasury Secretary and Dino Falaschetti to be Director of Treasury’s Office of Financial Research. The nominations now go to the full Senate.

In advance of a hearing with the CEOs of Equifax, Experian and TransUnion, House Financial Services Committee Chairwoman Maxine Waters (D-CA) introduced legislation to overhaul the credit reporting system. Her nearly 200-page bill, the Comprehensive Consumer Credit Reporting Reform Act of 2019, would give consumers more tools to dispute inaccurate information on their credit reports and place more burden on the industry for ensuring information is accurate. The bill would impose limits on the use of credit checks for employment purposes. It also would reduce the length of time from seven years to four years that negative items remain on credit reports. She introduced another piece of legislation to protect federal employees and contractors from negative credit reporting during a government shutdown.

On March 6, the Financial Stability Oversight Council, led by Treasury Secretary Steven Mnuchin, will hold a meeting with both an open and closed executive session. Topics will include nonfinancial corporate credit and proposed amendments to the Council’s guidance on nonbank financial company designations.

Federal Reserve Governor Lael Brainard will deliver remarks on March 7 at 12:15 pm on the “economic and monetary policy outlook” at a lecture series event hosted by Princeton University’s Julis-Rabinowitz Center for Public Policy and Finance and the Bendheim Center for Finance. Princeton, NJ

On March 7, the House Financial Services Committee will hold a hearing at 10 am on the Semi-Annual Review of the Consumer Financial Protection Bureau.

On March 12, the House Financial Services Committee will convene a hearing at 10 am on Wells Fargo with the CEO Tim Sloan testifying.

On March 13, the House Financial Services Committee will hold a hearing on reauthorization of the National Flood Insurance Program.

On March 14, the House Financial Services Subcommittee on Investor Protection, Entrepreneurship and Capital Markets will convene a hearing at 9:30 am on the Securities and Exchange Commission’s Best Interest Rule.”

On March 26, the House Financial Services Subcommittee on Investor Protection, Entrepreneurship and Capital Markets will hold a hearing at 2 pm on proposals to “improve environmental, social and governance disclosures.”

The Securities Industry and Financial Markets Association (SIFMA) and BPI host the 6th Annual Prudential Regulation Conference on June 4 in Washington DC. This year’s conference will assess how the post-crisis prudential regulatory framework is affecting the capital markets, including market liquidity, capital formation and innovation.

The Annual Conference provides a forum for the industry’s leaders to examine the changing dynamics of the bank regulatory and payments landscapes with two and half days of high-level keynote speakers, in-depth expert panels, and networking. Register today.
The Pierre, New York

This paper develops new measures of complexity for bank holding companies and investigates whether bank holding companies have simplified since the global financial crisis. The authors find that large banks remain complex, with caveats. The most organizationally complex banks have reduced the number of legal entities within their organizations and some now have affiliates in fewer countries. The mix of industries spanned by bank-owned entities has not shrunken. There are also fewer banks now with entities in foreign countries. Overall, some forms of bank complexity declined, however the largest banks remained highly complex based on the measures of complexity proposed in the paper.

Gender Diversity on Bank Board of Directors and Performance

This article analyzes the relationship between financial performance and the gender diversity of Boards of Directors at large U.S. banks over the period 1999 – 2015. The authors find that the relationship is non-linear: greater board gender diversity corresponds to lower performance when the female share of boards is less than a critical threshold, but higher returns when the female share of boards is greater than that threshold. They also find evidence suggesting that greater gender diversity above this threshold corresponds to fewer regulatory enforcement actions at well-capitalized banks.

What Can We Learn from the Timing of Interbank Payments?

This post argues that there is a nonlinear relationship between the amount of reserves in the system and the timing of interbank payments and that smaller banks changed the time of their payments more than larger banks. Banks make payments to each other throughout the business day, often relying on the reserves they hold at the Federal Reserve. Prior to 2008 the Federal Reserve kept reserves at a low level, so banks waited to make payments until they received payments from others, clustering this activity near the end of the day. Reserves rose significantly as the Federal Reserve implemented its large-scale asset purchase programs from 2008 – 2014. During that time, banks shifted payments to earlier times of day. The shift is more dramatic among smaller banks.

A Shortage of Short Sales: Explaining the Underutilization of a Foreclosure Alternative