How Bank Supervision Lost Its Way

We at The Clearing House are spending an increased amount of our attention focused on bank supervision rather than formal regulation. Our membership and banks of all sizes increasingly report that supervisory pressures are doing just as much to impair lending and customer service as regulatory ones. Innumerable articles are written on the requirements of the Volcker Rule but practically none on the generally opaque and increasingly arbitrary standards by which bank examiners are grading the condition of U.S. banks. While these supervisory dynamics are receiving little public attention, they are having a substantial economic impact.

In sum, three developments have converged to halt the ability of many banks to open branches, invest, or merge to better meet the needs of their customers. First, even as banks have dramatically improved their financial condition by increasing their capital, liquidity, and asset quality positions, supervisors have transformed the supervisory scorecard (the CAMELS rating system) from a measurement of financial condition to a measurement of compliance. Second, supervisors have adopted a series of unwritten rules that produce lower CAMELS ratings. Third, supervisors have adopted another series of unwritten, or in some cases written, rules (albeit none with any basis in statute) that translate those low ratings or other supervisory issues into a bar on expansion. The result is an entirely new regime, effectively invented by bank supervisors without notice and comment, that makes an examiner’s expectations regarding bank compliance matters a fundamental determinant of whether banks can invest and grow.

For perspective, consider that we routinely see serious compliance violations across a wide range of American industries. Those companies are subjected to enforcement proceedings and are required to pay fines and remediate their practices, but no one ever suggests that while those proceedings are pending they should be stopped from opening new franchises, building new plants, developing new drugs, designing new cars, or launching new apps. Yet somehow we have reached the point in banking where the punishment for a compliance problem routinely includes, in addition to a vast array of civil and criminal liabilities imposed by a wide array of federal and state authorities (often by multiple authorities for the same underlying conduct), a prohibition on any type of expansion by the bank.

Background
The centerpiece of bank supervision is the CAMELS rating system. It was created by examiners in 1979 as a scorecard to evaluate an institution’s “financial condition and operations” – in other words, its safety and soundness. (Interestingly, it was not adopted pursuant to any statute or regulation.) The CAMELS system evaluates a bank across six categories – Capital, Asset quality, Management, Earnings, Liquidity, and Sensitivity to market risk, especially interest rate risk – and assigns a composite rating, all on a scale of 1 (best) to 5. With the sole exception of a few small changes in 1996 (most notably, the addition of the “S” component), the CAMELS standards have not been materially updated in the almost 40 years since their adoption – not after adoption of the original Basel Accord on capital in 1988, the Basel III regime in 2010, the Comprehensive Liquidity Analysis and Review in 2012, or the Liquidity Coverage Ratio in 2014.

The result is a system that is hopelessly out of date. Detailed capital, liquidity, and other rules have been expressly designed and carefully calibrated to evaluate the key components of the CAMELS ratings: capital, liquidity, and, less obviously, earnings and asset quality, which are now evaluated through stress testing for certain banks. Thus, for example, the standards that examiners apply in deciding the capital component of the rating do not include consideration of any post-1978 regulatory capital standards – or any market indicators, which also have grown in sophistication over the past 40 years. There is no mention of CCAR, the self-described Comprehensive Capital Analysis and Review. Rather, the published standards speak vaguely of factors like “the ability of management to address emerging needs for additional capital.” This is not to say that there cannot be cases where a bank that is deemed well-capitalized under the current 35-plus different capital tests could not, in theory, still require more capital.  It is, however, pretty unlikely.

A further weakness of the CAMELS system is that it treats each factor as independent when in fact they are intensely interrelated. Again, consider stress testing. Both the asset quality and earnings of the firm drive that capital requirement. So, a firm with more risky loans and more capital can perform as well as a firm with fewer risky loans and less capital. The “A” in CAMELS, taken singularly and literally, suggests that a bank that takes more risk would receive a lower score than one that takes less risk. But, as modern capital measures and stress testing recognize, the reality is far more complex and demand an assessment that is holistic, not compartmentalized.

It is worth examining the predictive ability of CAMELS ratings. Consider the number of banks rated as weak (CAMELS 3, 4, or 5 in Exhibit 1). 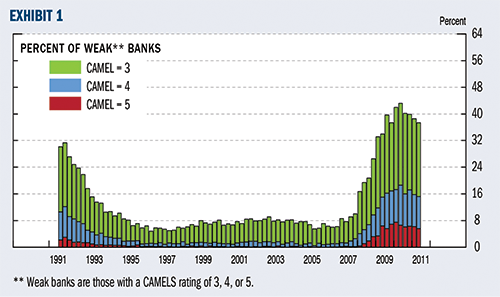 This chart seems to demonstrate little predictive ability for CAMELS ratings. In 2007, a small percentage was rated as weak, but hundreds failed. One would assume that this evidence would result in a rethinking of the CAMELS regime. It did – but not one focused on improving CAMELS as a measure of financial condition.

Changing the Subject: The Move from Financial Condition to Compliance
The appropriate response to the diminished value of CAMELS as a measure of financial condition would be to decrease its importance in the supervisory process or incorporate better measures of financial condition. Instead, supervisors have changed the subject and shifted the focus of the CAMELS regime away from financial condition. To their credit, the Federal Reserve and other banking agencies adopted several crucial post-crisis reforms to improve bank resiliency: most notably, CCAR stress testing, Basel III, and the LCR. However, exactly because more objective, analytically sound standards have overtaken the CAMELS system as a gauge of financial condition, examiners have shifted their emphasis to the one entirely subjective component: management. And not management as viewed through the lens of maintaining sound financial condition, but rather through the lens of “compliance” – not just with laws, but with examiner guidance and criticisms too.

Various “unwritten rules” reportedly have been adopted as part of this shift:

Grade Deflation
A shift of supervisory ratings from financial condition to compliance need not necessarily result in lower ratings, but it has.

Even putting aside the question of whether changes to something as consequential as application of the CAMELS rating system should go through a notice and comment, it should be beyond question that the ratings should not include a stealth factor – one that is not mentioned in the rating system but is effectively imposed in practice. Yet that is precisely what has occurred with compliance.

Major Consequences
Bankers now routinely refer to being in the “penalty box,” where they cannot expand through investment, merger, or adding a branch. There are various ways into the penalty box.

While some statutes governing expansion require an assessment of management (for example, the Bank Holding Company Act, governing bank acquisitions), many do not. And of those that do, each speak in particular to “management resources” – presumably, the ability of management to oversee an integration – and not compliance issues. Nonetheless, the agencies – most notably the Federal Reserve through its Supervisory Letter 14-02 (never published for comment) – take the position that all expansion, even branching, is prohibited under such circumstances.

The results of this new supervisory regime are significant:

Of course, for examiners interested in having their compliance criticisms acknowledged and immediately remediated, this system works well. But as we note, it is not a tool that regulators in any other industry feel they need; it has important economic consequences; and as described below, it has serious procedural problems.

Lack of Process
Given the potential impact of a CAMELS rating, one might expect banks to appeal adverse ratings frequently. That does not happen, however, for two reasons. First, every banker and bank counsel is taught that “examiners have long memories,” such that potential for retaliation is always a concern. (Note: In recognition of this tendency to retaliate, the agencies have adopted internal policies criticizing examiner retaliation against institutions for pursuing supervisory appeals. One can question their effectiveness in practice, however.) Second, appeals are made to the same agency that assigned the rating. For example, at the Federal Reserve, the ultimate arbiter in an appeal is a designated Federal Reserve Board Governor, while at the FDIC, appeals are ultimately decided by the agency’s Supervision Appeals Review Committee. In addition, the FDIC’s General Counsel serves as a nonvoting member of the Committee.

Historically, supervisors with genuine safety and soundness concerns were required to use the options laid out for them by Congress in statute: namely, the issuance of an order to correct an unsafe and unsound condition or practice – that is, an enforcement action under 12 U.S.C. § 1818 of the FDI Act – or the issuance of a capital directive under 12 U.S.C. § 3909(d), part of the International Lending Supervision Act of 1983. Both types of orders came with relatively objective standards for supervisory action and a meaningful ability for the institution to appeal that action, including a notice of charges and an opportunity for an administrative hearing. Those processes have almost become dead letters; regulators often have no need to draft a formal notice of charges, show substantial evidence on which those charges are based, or put their allegations to the test in front of a neutral arbiter, when all they have to do is threaten (or actually execute) a CAMELS downgrade.

Recommendations
We will save for a future issue or other forum any specific recommendations about how to reform the supervisory process. A few core reforms are quite clear and necessary. The first is an unequivocal statement that the purpose of a CAMELS rating is to assess the financial condition of the bank from the perspective of its potential risk to the Deposit Insurance Fund. The second is the withdrawal of SR Letter 14-02 and all other restrictions on bank expansion that do not have a basis in statute or a regulation adopted pursuant to the Administrative Procedure Act. The third is a complete overhaul of the CAMELS regime (including its potential replacement) that emphasizes clear, cogent, and objective measures of financial condition over vague, arbitrary, and subjective ones. Fourth, in the interim, there should be a conclusive presumption that a profitable company in compliance with all applicable capital and liquidity rules and whose debt is rated investment grade will receive a “1” rating for capital and liquidity and sensitivity to market risk, including interest rate risk, and a rebuttable presumption that it will receive a “1” rating for asset quality and earnings.

About the Authors:
Greg Baer is President of The Clearing House Association and Executive Vice President and General Counsel of The Clearing House Payments Co. He oversees the legal, compliance, and litigation functions for the organization’s payments business and leads the strategic agenda and operations of the Association. Prior to joining TCH, Baer was Managing Director and Head of Regulatory Policy at JPMorgan Chase.

Jeremy Newell is Executive Managing Director, Head of Regulatory Affairs, and General Counsel of The Clearing House Association. Newell has previously worked as counsel and policy advisor at WilmerHale, the Board of Governors of the Federal Reserve System, American Express, Natixis, and Sullivan & Cromwell. Newell received his J.D. from Yale Law School. 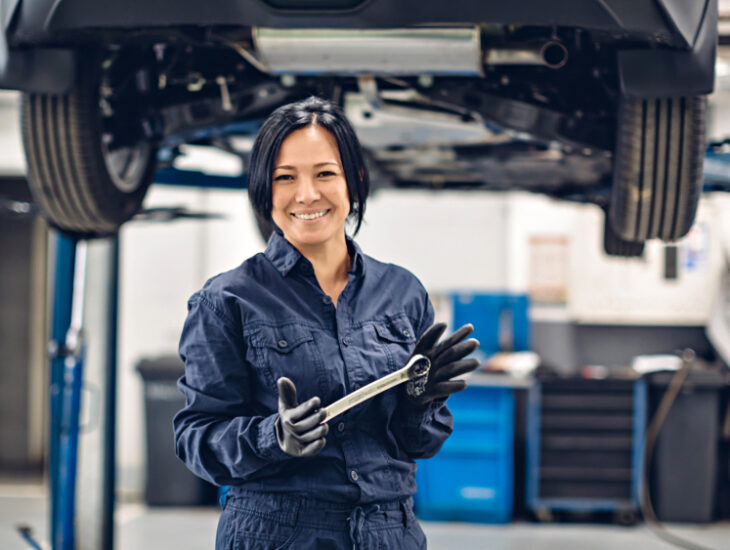