In a May 21 speech, former Federal Reserve Governor Daniel Tarullo called for higher capital requirements on U.S. GSIBs and criticized several recently proposed changes to the U.S. stress testing framework as leading to a reduction in the capital requirements of the eight U.S. GSIBs.  That criticism is misplaced; as shown below, the stress capital buffer (SCB) proposal currently pending would increase the capital requirements of the largest U.S. banks, because it effectively adds the GSIB surcharge to the risk-based post-stress minimums.  In addition, the severely adverse scenario and the global market shock in the Dodd-Frank Act Stress Tests (DFAST) are calibrated to yield significantly worse outcomes than those experienced during the last financial crisis and require banks to have substantial capital even after that stress.

That result is particularly telling when considering that the 2018 stress tests, conducted after former Governor Tarullo left the Federal Reserve, were the most severe since the introduction of DFAST in 2013.  In the 2018 stress tests, which featured an especially severe scenario, the decline in common equity tier 1 capital relative to risk-weighted assets was 4.4 percent on aggregate, which is the largest ever and more than 1 percentage point higher than DFAST 2017.

The chart below illustrates the severity of the 2018 stress tests by depicting the projected impact of the stress test scenarios and the economic conditions during the 2008 financial crisis on bank profitability.  The lower is projected bank profitability under stress, the larger is the peak-to-trough decline in banks’ regulatory capital ratios over the nine-quarter stress horizon.  Through the lenses of our models, the chart clearly shows that both the 2016 and 2018 stress scenarios, but especially the 2018 stress scenario, were considerably more severe than the 2008 financial crisis. 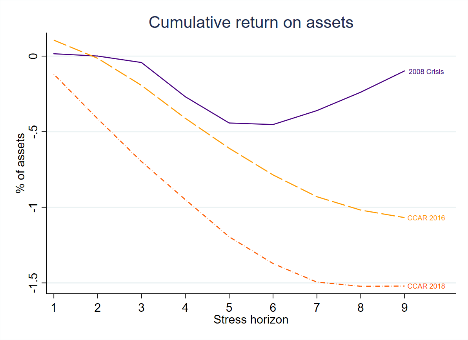 In his speech, former Governor Tarullo said “capital requirements for the largest banks should be going up, not down.”  He provided several reasons for such an increase, including the risk of deeper recessions because of interest rates being closer to the zero-lower bound.   The setting of capital simply involves tradeoffs, and there is good evidence that current capital requirements are too high, not too low.

Bank capital requirements come with important benefits and costs. Higher capital requirements help to reduce the likelihood of future financial crises but also make it costlier for banks to provide loans to businesses and households.  Several academic studies have estimated the level of bank capital requirements that best trades off these benefits and costs. The studies have generally followed the approach used by the Bank for International Settlements (BIS) in a 2010 paper that was an important input to the calibration of the Basel III standard for bank regulation, which found that based on estimates of costs and benefits, the optimal level of capital requirements to be about 8 to 13 percent of Tier 1 capital relative to risk-weighted assets.  Moreover, a 2016 paper by IMF economists (Dagher et al.) estimate the amount of bank capital that would have been necessary to avoid imposing costs on bank creditors or bank bailouts in past banking crises.  They find that capital and long-term “bail in” debt between 15 to 23 percent would have been necessary to absorb losses in most bank crises.

Judging by these estimates, U.S. banks already hold more capital than optimal.  For example, the aggregate Tier 1 capital ratio of the largest banks is 13.8 percent, and the largest banks also have long-term debt outstanding equal to about 10 percent of risk-weighted assets for a total loss-absorbing cushion of 24 percent, above the range the IMF study reports is necessary for banks to comfortably weather a banking crisis.

In summary, bank capital requirements should not be going up because the U.S. stress tests impose a stress significantly worse than the last financial crisis and require banks to have substantial capital even after that stress.  Moreover, based on several cost-benefit analyses conducted by the Bank of International Settlements, the Bank of England and the IMF, U.S. banks currently hold more capital than optimal.

“I Swear the Sun Rose in the West”: Denying the Obvious About Bank Performance in 2020 October 18, 2021
More Posts by This Author
Fraud Reduction

What is The Current State of Bank Capital in The U.S.? August 29, 2022
Consumer Affairs