Cracks in the Fed’s Stress Tests

At the beginning of February, the Fed END_OF_DOCUMENT_TOKEN_TO_BE_REPLACED the macroeconomic scenarios it will use when it makes its projections of each large bank’s capital ratios under stress.  The severely adverse scenario in CCAR 2018 is the most severe scenario provided by the Fed to date and includes conditions significantly worse than any post-war recession, including the recession that followed the 2008 financial crisis.  By relying on projections under a single extreme scenario to determine how much capital banks need to pass the test, the Fed is further incentivizing banks to pull away from lending to cyclically sensitive sectors.  In this blog post, we propose that the Fed use the multiple projections that are already conducted as part of the stress tests to ameliorate the incentives of banks’ to reduce the supply of credit to relatively risky borrowers, while maintaining the overall toughness of the stress tests.

The Fed designs its stress scenarios using what it calls “a recession approach,” in which the severely adverse scenario is intended to “reflect conditions that characterize post-war U.S. recessions, generating either a typical or specific recreation of a post-war U.S. recession.”  A key aspect of that approach is an explicit assumption that the unemployment rate under the severely adverse scenario will rise at least to 10 percent but at a minimum by 3 to 5 percentage points.1  The Fed chose that assumption because the unemployment rate had risen to 9.9 percent in the Great Recession (from 4.8 percent) and rose by 3-5 percentage points in severe post-war recessions.  The rest of the macroeconomic variables are set to be consistent with the assumed rise in the unemployment rate. 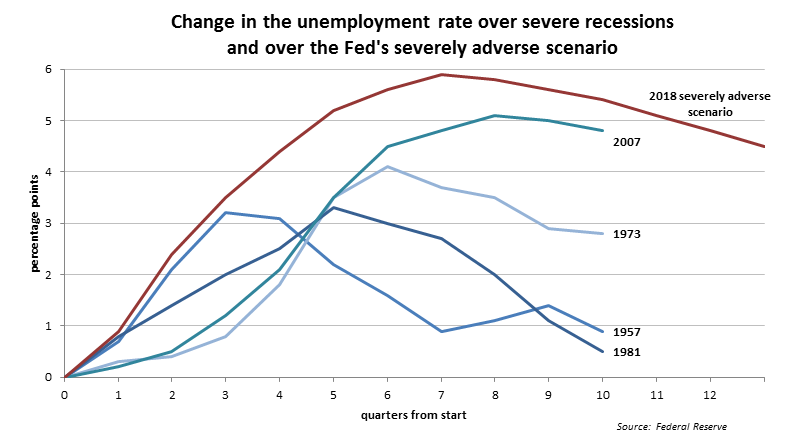 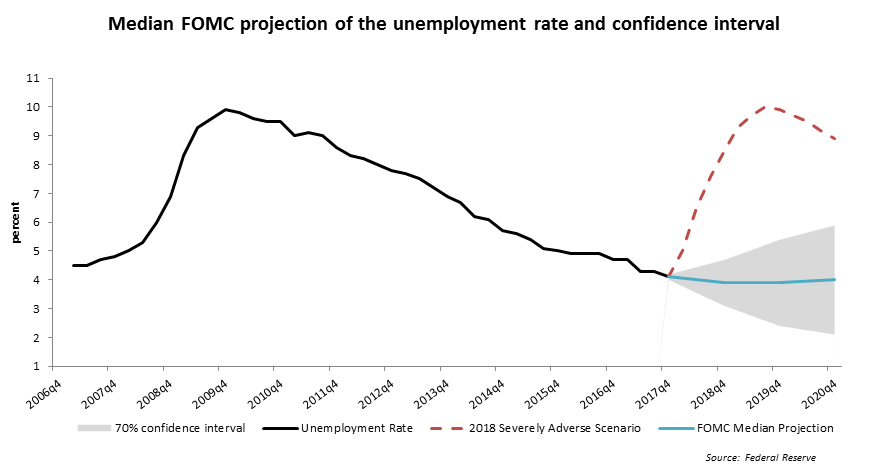 Moreover, the stress scenario includes declines in home, commercial real estate, and equity prices that are also unprecedented, driving even lower the possibility that an outcome as bad as the scenario would ever occur.  As discussed in a END_OF_DOCUMENT_TOKEN_TO_BE_REPLACED , the test assumes home prices fall 30 percent, commercial real estate prices fall 40 percent, the stock market declines over 60 percent, and investment-grade bond spreads widen by 400 basis points; in each case more than assumed in the 2016 test and more than experienced in the financial crisis. (We are still analyzing the assumptions with respect to the global market shock, and may have more to add on those in a later post.)

The undue severity of the stress test scenario creates undesirable consequences that become more significant when combined with another significant flaw in the design of the stress tests, the reliance on a single scenario.  While banks fail for many reasons, the stress tests rely on the results of a single scenario to set banks’ required capital levels.  The result is a test that is relatively hard on banks that are relatively more exposed to a severe recession and the global market shock and relatively easy on banks that are relatively more exposed to other sources of risk.  Consequently, banks have a strong incentive to substitute away from lending to sectors that do poorly in an economic downturn such as small businesses and riskier households.  A number of published studies confirm that banks subject to the stress tests have indeed pulled back from those sectors. [ END_OF_DOCUMENT_TOKEN_TO_BE_REPLACED , END_OF_DOCUMENT_TOKEN_TO_BE_REPLACED , END_OF_DOCUMENT_TOKEN_TO_BE_REPLACED ]

In addition, the banks are required to project their capital levels under multiple scenarios that they develop to highlight their own idiosyncratic stresses.  Those projections not only use a different model, but capture entirely different risks from the projections using the common scenarios.

To recap, the Fed has several projections for each bank at its disposal each year, but it only uses one – the Fed’s projection under the severely adverse scenario – to determine how much capital the bank needs to pass the stress test.

There are a variety of ways in which the Fed might make better use of these other scenarios and projections to capture a wider range of risks and fix its over-reliance on a single scenario in assessing capital adequacy under stress.  The Fed could, for example, take a weighted-average of the decline in each bank’s capital ratio in different scenarios, with the weights chosen so that the results best reflect the actual risk exposure of the tested banks.  This might mean the Fed would use its projections under the severely adverse and the adverse scenarios and the bank’s projection under their stress scenario, with the most weight likely going on the severely adverse scenario. 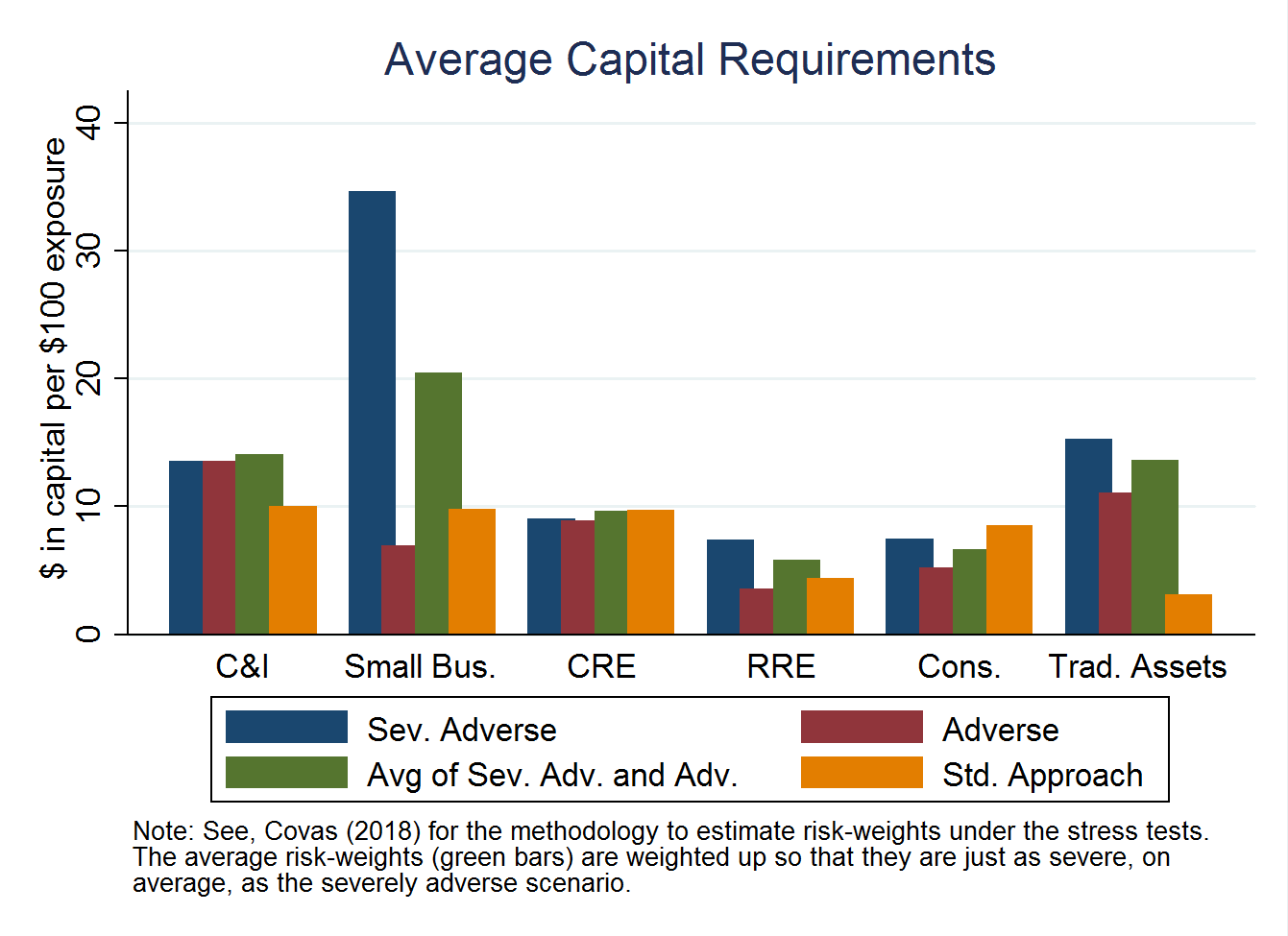 To estimate the potential impact of using different scenarios, or combinations of scenarios, we use the approach developed in Covas ( END_OF_DOCUMENT_TOKEN_TO_BE_REPLACED ) to take the test outcome and reverse engineer the amount of capital required for each loan type to pass the test.  The chart above shows the estimated tier 1 capital requirements under the stress tests and the Basel III standardized approach across various asset classes.  The blue bar depicts the average capital requirements under the Fed’s severely adverse scenario for each asset class.  For example, banks need to hold approximately $35 in tier 1 capital for each $100 of small business loans held on their books.  This amount of capital is 3.5x higher than under the Basel III standardized approach (the orange bar).  Moreover, as shown by the red bar, banks need to hold significantly less amounts of capital for small business loans under the Fed’s adverse scenario.  Generally, small businesses are considered to be riskier borrowers and thus more sensitive to the abrupt rise in the unemployment rate under stress.

The green bar denotes the capital requirement obtained by (1) taking the simple average of banks’ post-stress ratios under the severely adverse and adverse scenarios, and (2) multiplying the result by a scaling factor chosen so that the average decline in the post-stress tier 1 ratio is the same as under the severely adverse scenario.  In this case, requirements for small business loans are about 2x higher than under the Basel III standardized approach.  Similar observations can be made for residential real estate mortgage loans and trading assets, that is averaging the results of the stress tests would result in lower average risk-weights for those portfolios and would not reduce the overall severity of the stress tests.  Of note, the global market shock is also included in the Fed’s adverse scenario, but it is less severe which results in lower estimated risk-weights under stress for trading assets.  Finally, while not statistically significant, the implicit capital requirements for of commercial and industrial loans and of commercial real estate loans are slightly higher when the average is used than when the severely adverse is used.

These or other similar changes would help make the Fed’s stress tests more thorough and every bit as tough as they are today.  But by capturing a wider range of risks, they would no longer encourage banks to stop lending to everyone except those who don’t need the funds.   Moreover, the stress tests would no longer depend exclusively on the toughness of one scenario to be tough enough to provide a credible annual crucible for the banking system.

1The Fed released proposed revisions to its 2013 Policy Statement on Scenario Design in December 2017, but none of the changes proposed therein are material to the discussion here.

Consistency in Risk Weights for Corporate Exposures Under the Standardized Approach January 10, 2022
More Posts by This Author
Bank Activities and Structure