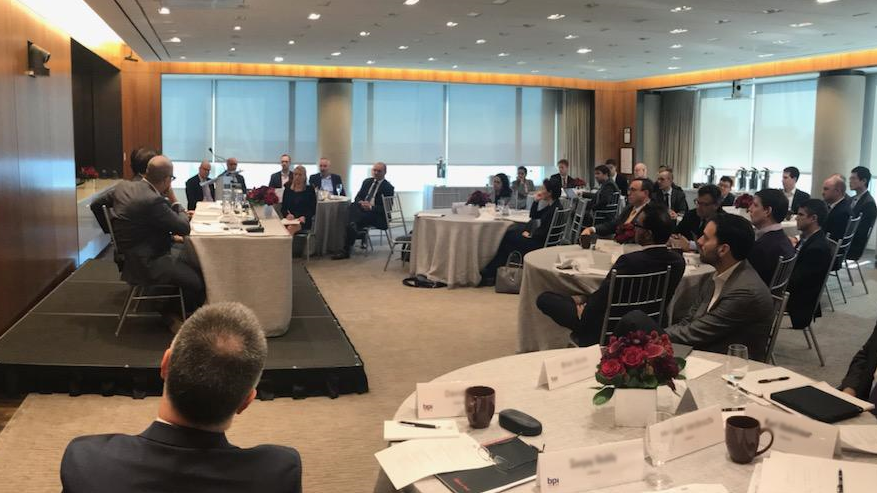 On the morning of November 6, BPI hosted it’s third half-day symposium on money markets, banking regulations, and Fed operations.  Summaries of the previous two symposiums are available here and here.  The symposium focused on the implications of the severe volatility in repo markets observed in September and was attended by market participants, academics, and staff from the IMF, Fed, OCC and FDIC.

The first panel set the stage by discussing what happened in repo markets in mid-September, the Fed’s response, and the outlook for further turmoil at year-end.  On September 16, corporate tax payments and the settlement of Treasury securities combined to cause a sharp upward spike in repo rates, with rates remaining elevated the following day and repo markets unsettled for weeks. (For further discussion see “What Just Happened in Money Markets, and Why it Matters.”) The panelists attributed the turmoil to a confluence of technical and structural influences including a significant rise in repo lending over the past year, the limitation of most repo activity to early in the day, and the unwillingness of banks to risk having to borrow from the Fed overnight or even running a daylight overdraft.  Indeed, a point of agreement across the symposium discussion was that the volatility in repo markets raised a broad and complicated set of issues ranging from market structure to banks supervision and regulation to internal firm dynamics. The Fed has responded to the volatility by adding reserves through overnight and term repo as well as purchases of Treasury Bills.  The panelists recommended that the Fed consider ways to manage the volatility of the Treasury General Account and the Foreign Repo Pool (one panelist said that the First rule of the Foreign Repo Pool is that no one talks about the Foreign Repo Pool (BPI does; for a discussion of how the Treasury General Account and Foreign Repo Pool contributed to repo volatility, go here.))  The panelist saw a significant risk that financial markets, especially FX swap markets, could be disrupted over year-end as banks scramble to reduce their global systemically important bank (GSIB) capital surcharge.

The second panel discussed the role of regulations in the repo event including how liquidity rules and supervisory expectations have made banks less willing to substitute cash for repo and how the leverage-based capital requirements and the GSIB surcharge have increased the cost of repo intermediation.  The panelists noted that even though the most visible liquidity requirement – the liquidity coverage ratio – treats reserves and Treasury reverse repo the same, supervisory liquidity assessments include rules about asset governance and monetization that embed a preference for reserves.  Moreover, that preference is amplified by a message that banks should expect no central bank support in times of stress.  Relatedly, one panelist noted that large banks typically experience a significant cash outflow early in the day and providing substantial amounts of additional repo funding could risk putting their account at the Fed into overdraft, an outcome banks were unwilling to risk even though they have collateralized capacity at the Fed to run such overdrafts. The panelists also noted that leverage ratio requirements, which require banks to hold substantial capital against very low-risk assets, have curtailed banks’ ability to resolve dislocations in the repo market. (For more information, see “Bank Regulations and Turmoil in Repo Markets.”)  While banks are less likely to be bound by their point-in-time leverage ratio requirements, about half of the banks that participated in this year’s stress tests found the leverage requirement hurdle rates to be the most difficult to surmount.  It was also noted that the upcoming stress capital buffer rule may relax the leverage ratio constraints under stress, but the incentives to manage the GSIBs scores at year-end will rise under that rule as the GSIB surcharge will be added to the post-stress minimum capital requirements in CCAR.

The third panel discussed what the repo volatility event revealed about banks’ demand for reserve balances, the resulting implications for monetary policy, and the prospects for a Fed standing repo facility.  The panelists broadly agreed that the Fed’s response to the repo volatility of increasing the quantity of reserve balances was appropriate and has been helpful.  The panelists judged that the Fed should add a substantial amount of reserves to avoid future volatility, more than the level in early September that the Fed appears to be targeting, and agreed that the Fed should focus less on the quantity of reserves and more on the extent to which money market interest rates rise above the rate the Fed pays on excess reserves to determine whether the quantity of reserves was sufficiently ample.  Fed purchases of securities were seen as more beneficial than repo because Fed repos take up space on financial institutions’ balance sheets, imposing capital cost constraints.  The panelists were somewhat doubtful that a standing repo facility, if the Fed were to adopt one, would help address repo market volatility or reduce the stigma associated with borrowing from the Fed (see also “Design Challenges for a Standing Repo Facility”.)  The Fed actions to date were seen as unlikely to help deal with upcoming year-end pressures owing to the GSIB surcharge.

The final panel explored whether the recent volatility in repo markets should be cause for concern for the LIBOR transition to SOFR (a measure of the repo rate), the consequences from such volatility, and potential alternatives to SOFR. The panelists discussed a range of issues associated with the transition from LIBOR to alternative rates. The panelists agreed that SOFR solves certain issues with LIBOR but that additional work is needed for the rate to gain traction among customers and market participants. The Bank Yield Index from the ICE Benchmark Administration was also discussed, including in particular that the BYI does not rely on banks’ submissions, the characteristic of LIBOR that led to the benchmark’s problems. The panel wrapped up with a discussion of the operational complexity of the LIBOR transition particularly given the limited timeline before LIBOR is slated for retirement on December 31, 2021.