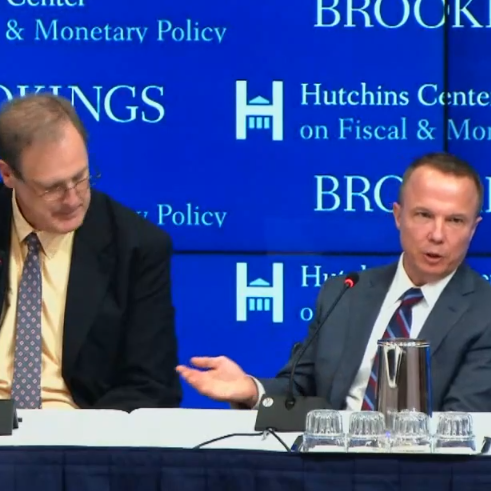 The Fed’s Balance Sheet Can and Should Get Much Smaller

Remarks at a Brookings Institution Symposium on “The Repo Market Disruption: What Happened, Why, and Should Something Be Done About It?”

I pretty much agree with everything Bill said, which is perhaps not surprising since we worked side by side for 21 years, but there are two critical points on which we may disagree.  First, what the Fed bumped into in mid-September is the short-run, not the long-run, demand for reserves.  In the long run, the steep part of the demand curve for reserves is much lower.  Second, the cost of the large-balance sheet implementation framework the Fed has adopted increases with the size of the balance sheet necessary to operate it.  In my remarks, I will address these two points and describe the course the Fed could follow to reduce the level of reserves considerably, and I will argue that doing so is in the interests of the Federal Reserve and also the economy.

Demand for reserves depends on supply

The quantity of reserves that the Fed has judged to be necessary for reserves to be abundant has grown remarkably over time.  In April 2008, when Federal Reserve staff first considered the possibility of operating policy with an abundant-reserves framework, staff estimated that the level of reserves that would be needed “…might be on the order of $35 billion but could be larger on some days.”  The assumption rose to $100 billion in 2016, $500 billion in 2017, and $600 billion in 2018.  It is not possible to know precisely what level the FOMC judged necessary at the beginning of this year when it made its decision to adopt a large-balance-sheet framework because the Fed decided to break with its own tradition and not disclose its forecast.  However, available information suggests that at that time the FOMC judged about $1 trillion in reserves was abundant.  I’d guess that their current estimate is about $1½ trillion.

Why has the Fed’s forecast of the minimum abundant level of reserves grown steadily over time?  When the Fed completed QE3, reserves peaked at $2.8 trillion, and for nearly a decade the interest rate that the Fed paid on reserve balances was above the interest rate banks could earn on other, similar liquid assets.  Over time, banks and their supervisors took actions that made sense in that environment, and they then became accustomed to the resulting important role of reserves in banks’ liquidity risk management.

A banker recently provided me an example of this process.  When the interest rate on reserves was higher than market rates, her bank elected to hold reserves in an amount equal to its projected cash needs under stress over one week and Treasury securities to cover needs over the following three weeks.  When repo rates moved higher than the interest rate on reserves, the bank considered reducing its cash holdings to its projected need over three days, still holding Treasury securities to cover the rest of the month.  While both arrangements are consistent with liquidity requirements, supervisors would expect an explanation for the reduction in cash, an experience the banker’s management decided they would rather avoid, and the bank elected not to make the change.  In short, the Fed’s estimate of the amount of reserves needed to operate a large-balance-sheet implementation framework has grown over time because the level needed has risen with the level provided.

Such a dynamic led the Norges Bank (the central bank of Norway) in 2010 to switch from a system with abundant reserves to a system with more scarce reserves, (roughly the reverse of the FOMC’s decision in January).  When seeking comment on their decision, they indicated:

When Norges Bank keeps reserves relatively high for a period, it appears that banks gradually adjust to this level…With ever increasing reserves in the banking system, there is a risk that Norges Bank assumes functions that should be left to the market. It is not Norges Bank’s role to provide funding for banks…If a bank has a deficit of reserves towards the end of the day, banks must be able to deal with this by trading in the interbank market.

The dynamic can also be seen in a graph of the fed funds-IOER spread versus the level of excess reserves.  The purple line shows the relationship as the Fed increased the level of reserves and the orange line shows the relationship as reserves declined in recent years.  As can be seen, the interest rate response as reserves have declined has been sharper, suggesting that banks, and their supervisors, grew accustomed to reserves as a source of liquidity, and it has taken higher spreads to move them off their preferred arrangements than it did to make them willing to hold the reserves in the first place. 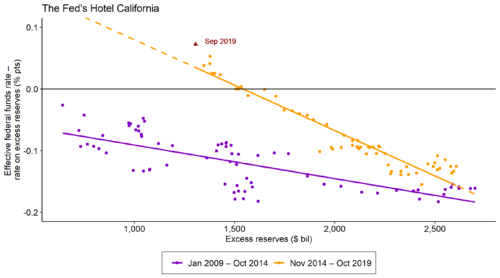 The dependence of the demand for reserves on supervisory preferences should not have taken the Fed by surprise.

“I do know that that message has been communicated at least in some supervisory circumstances in the past. I would say that that’s in the process of being rethought.”

While it’s true that the Fed’s two recent Senior Financial Officer Survey’s did not find that supervisory expectations, guidance, or regulations were important determinants of banks’ demand for reserves, that’s probably because the Fed did not include those possible reasons as potential responses to its questions on the surveys.  In response to a BPI survey conducted in January, many banks judged that supervision and regulation were “important” or “very important” as reasons for their reserve demand including Reg YY liquidity monitoring, the LCR, examiner expectations about the composition of liquidity buffers, and resolution liquidity requirements. (See “Missing Answers to a Recent Fed Survey.”)

Banks’ elevated demand for reserves also reportedly stems from an unwillingness to risk running a daylight overdraft in their account at the Fed.  Bankers have explained to me that, while a daylight overdraft used to be unremarkable, now, because overdrafts are rare, supervisors want an explanation if one occurs.

First, it costs taxpayers money.  Term premiums are negative and have been for years.  Moreover, the short-rates used to calculate term premiums have been below the IOER rate when the balance sheet is especially large.  For both reasons, going forward, every dollar the Fed invests above and beyond the amount of currency reduces expected Fed income over the term of the securities.  That’s what a negative term premium means.  Using conventional estimates, $1½ trillion in reserves cost the Fed, and therefore taxpayers, about $15 billion a year in seigniorage.

Second, it reduces the ability of the Fed to conduct QE.  The FOMC perceived its ability to expand the balance sheet to be limited because of political considerations.  If the Fed starts with a big portfolio it will have less far to go.  While the Fed could engage in another “maturity extension program” if it held short-dated securities, some estimates indicate that the MEP was less effective than the other LSAPs.

Third, it puts Fed independence at risk.  A large balance sheet means large interest payments to large domestic and foreign banks.  Eventually, those payments will serve as fodder for those who would attack the Fed.  Moreover, a large balance sheet will prove irresistible to Congress as a way to pay for things.

For example, consider the financing plank of the Green New Deal:

As the checks go out, the government’s bank ― the Federal Reserve ― clears the payments by crediting the seller’s bank account with digital dollars. In other words, Congress can pass any budget it chooses, and our government already pays for everything by creating new money.

But, as Dave Lindsey would often remind us when we were drafting the bluebook, “They don’t care what we think!” The minutes of the November 2018 FOMC meetings explains what they think:

Potential drawbacks of an abundant reserves regime included…the need to maintain relatively sizable quantities of reserves and holdings of securities, and relatively large ongoing interest expenses associated with the remuneration of reserves…but [FOMC participants] thought that reserve supply could be reduced substantially below its current level while remaining in such a regime…Participants judged that if the level of reserves needed for a regime with abundant excess reserves turned out to be considerably higher than anticipated, the possibility of returning to a regime in which excess reserves were limited and adjustments in reserve supply were used to influence money market rates would warrant further consideration.

Even though the Fed’s estimate of the quantity of reserves necessary to implement the large-balance-sheet approach has probably been increased by at least half over the past year, the FOMC does not appear to be giving a small-balance-sheet approach “further consideration.”  In fact, two weeks ago the President of the New York Fed said “I don’t see any real need to seriously reconsider this. The fact that reserve levels are higher than perhaps we were anticipating a year or so ago doesn’t fundamentally change this calculus that this is a very effective and efficient way to run monetary policy.”

First, the Fed needs to control volatility in reserve balances including especially those caused by swings in the Treasury General Account and, to a lesser extent, the Foreign Repo Pool. 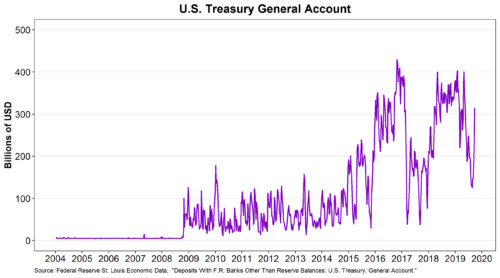 Another Fed liability that has increased significantly over time is the Foreign Repo Pool, where foreign official and international holders of accounts at the Fed invest in overnight reverse repurchase agreements.  That pool has grown from about $30 billion before the crisis to about $300 billion now.  The growth owes in part to the New York Fed’s removal of constraints on customers’ ability to vary the size of their investments. 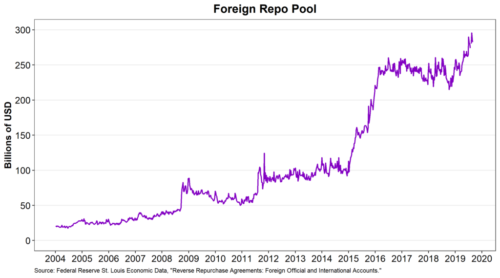 When the Treasury General Account and the Foreign Repo Pool vary there is a corresponding equal and opposite change in reserve balances.

The Fed can control variability in reserves using repos in the near term, but in the intermediate term, Treasury needs to return to keeping its cash in the private sector, and the Fed needs to reimpose constraints on the Foreign Repo Pool.

Second, the Fed needs to conduct a reeducation campaign for bankers and bank supervisors to root out any unwarranted bias toward deposits at the Fed as a liquid asset, and to install the view that collateralized daylight overdrafts are unremarkable and appropriate.

Third, the Fed should then restart the gradual decline in the System’s portfolio of securities.  The resulting upward pressure on short-term interest rates relative to the IOER rate will lead banks to economize on their holdings of reserve balances.

These steps will promote a virtuous cycle.  Reduced volatility of reserves will allow the Fed to shrink with less risk of turmoil in money markets.  Greater willingness to allow banks to substitute Treasuries for reserve balances for purposes of meeting liquidity requirements will allow the Fed to shrink further and also reduce risk of money market volatility.  The increased opportunity cost of keeping deposits at the Fed will lead banks to find alternatives and supervisors eventually to become more comfortable with those alternatives.

Imposition of SPOE and TLAC Requirements on Large Regional Banks is Unnecessary to Promote Financial Stability June 30, 2022
More Posts by This Author
Bank Activities and Structure