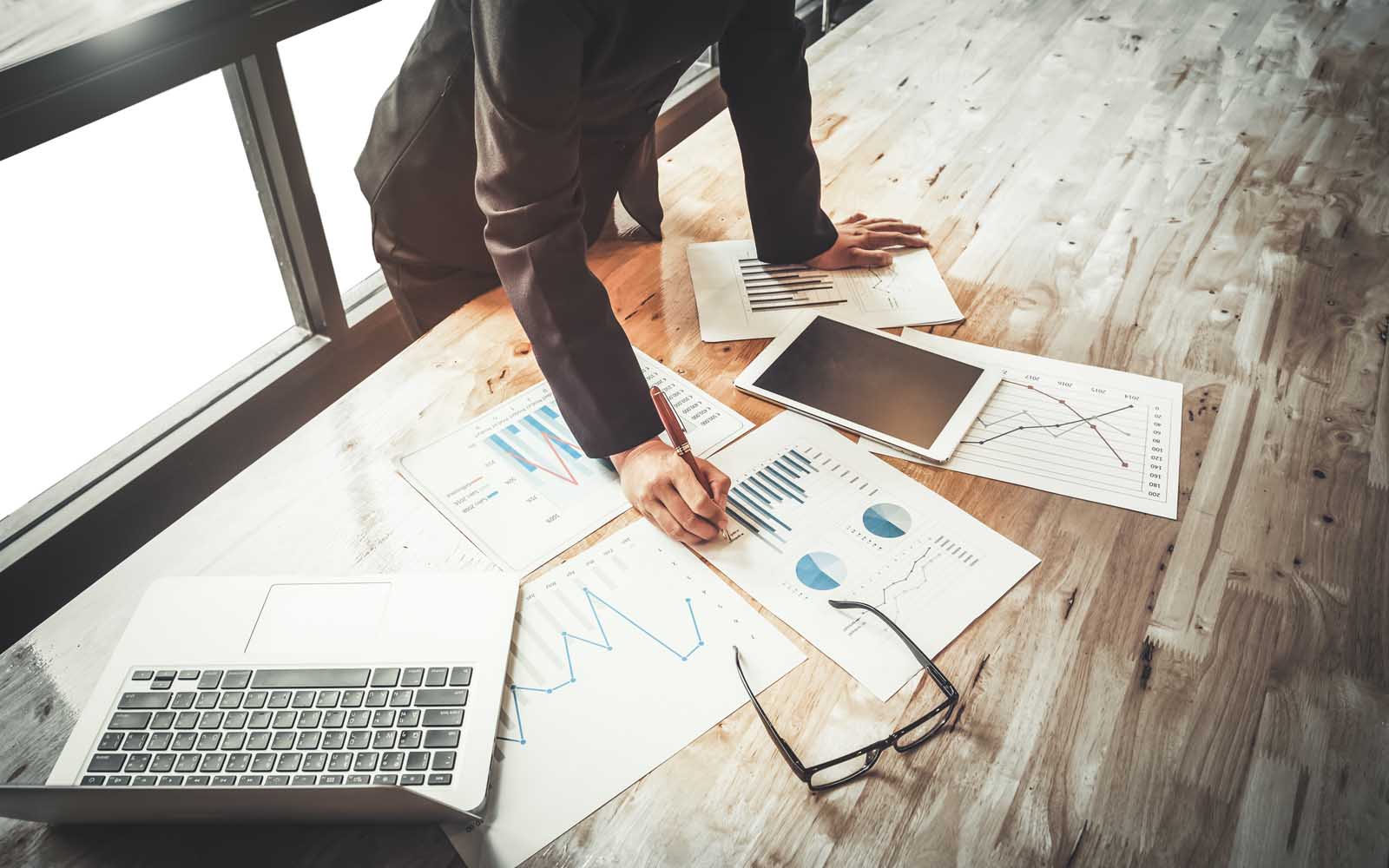 On June 21, the Federal Reserve released the results of the 2019 Dodd-Frank Act Stress Tests (DFAST). These results assessed the performance of banks under stress, based on the Federal Reserve’s 2019 severely adverse scenario and bank balance sheets as of year-end 2018. The DFAST results also incorporate capital actions based on bank dividends paid in the prior year and with share repurchases assumed to be zero. The stress test results for banks based on their own capital plans, also known as the Comprehensive Capital Analysis & Review, will be released at the end of this week.

This post analyzes bank performance in DFAST 2019 and compares the results to previous years using the same sample of banks.[1] Because the capital requirements of most large banks are determined based on the results of the Fed’s stress tests, yearly changes in those results have important implications for bank ability to support economic growth and their capital buffers.

To give an overview of the DFAST 2019 results, we estimate each bank’s SCB using the definition proposed by the Federal Reserve in April 2018. Specifically, the SCB is defined as the maximum decline in each bank common equity tier 1 (CET1) capital ratio under stress and includes four quarters of common stock dividends. The Federal Reserve is planning to integrate the results of the stress tests with the current non-stressed capital requirements by replacing the capital conservation buffer with the SCB. As shown by the yellow bars in the first bar chart, the aggregate SCB is estimated to be 3.3 percent of risk-weighted assets using DFAST 2019 results. Moreover, the aggregate SCB based on this year’s results is about the same as the SCB estimated using the results of the 2016 and 2017 stress tests. Last year’s stress tests were the exception, because of an even more severe stress scenario combined with a higher path for interest rates that resulted in a higher aggregate SCB.

Looking across the different bank groups, the estimated average SCB in 2019 was higher for the global systemically important banks (GSIBs) and the intermediate holding companies (IHCs) of foreign banking organizations relative to the SCB of large regional banks. Relative to last year’s results, the average SCB of GSIBs fell one percentage point, while the SCB of the IHCs also declined, but by less. This was in part because most IHCs became subject to the global market shock and large counterparty default components in DFAST 2019.[2] In contrast, the SCB of the large regional bank group remained unchanged between this year’s and last year’s stress tests.

Next, to better understand the changes in bank SCBs, the second bar chart displays bank performance across the major components of pre-tax net income and changes in unrealized gains on AFS securities. The decline in the estimated SCB for GSIBs and IHCs in 2019 relative to last year’s result is importantly driven by three factors: 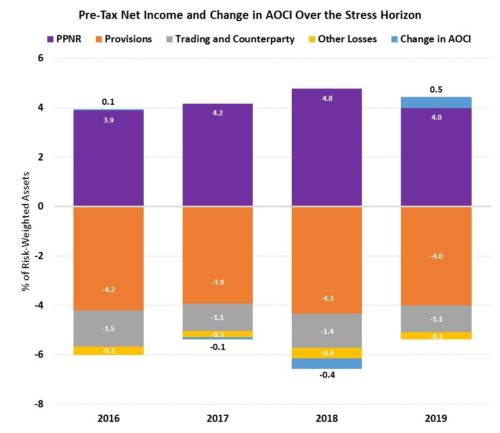 In general, changes in the timing of losses and revenues can change bank capital requirements under stress without materially affecting the projections of aggregate cumulative pre-tax net income. This occurs because many banks reach their minimum CET1 capital ratio before the end of the test. Hypothetically, if a bank reaches its minimum capital ratio early in the test, the projections of revenues after the minimum is reached are less important to evaluate a bank’s performance under stress. Thus, losses that are booked earlier into the projection period, such as trading and counterparty losses and unrealized losses/gains on AFS securities, could have a disproportionate impact on a bank’s SCB. The Fed does not report the quarterly progression of the various components of pre-tax net income over the nine-quarter stress horizon. Thus, it is difficult to decipher precisely the impact of the various components of pre-tax net income on a bank’s SCB. Nonetheless, we believe changes in the projections of unrealized losses/gains and trading and counterparty losses are playing a key role in explaining the change in the aggregate SCB between 2018 and 2019. 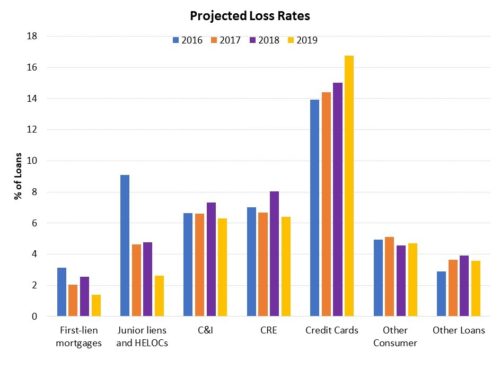 Lastly, the third bar chart displays the aggregate loss rates across the seven loan portfolios included in DFAST. Overall, loan losses were about 6½ percent lower in DFAST 2019 relative to the previous year. This was in part due to a lower and more gradual decline in the house price index and the commercial real estate price index. In addition, projected losses over the nine-quarter stress horizon were in line with the path of the macroeconomic variables in the Fed’s severely adverse scenario. Specifically, using the suite of models developed in Covas and Nelson (2018), forecasted aggregate losses were $300 billion, which is very close to the $296 billion projected using the Fed’s own models.

In contrast, losses on residential real estate (RRE) loans were significantly lower than expected. We noted in earlier work that losses on first-lien mortgage loans in DFAST 2018 were approximately eight times higher than losses on the same type of loans on the books of the GSEs. This was despite banks and GSEs having somewhat similar delinquency rates and the GSEs using the same stress scenario as the banks.

In summary, the main takeaway of this year’s stress test is that the aggregate stress capital buffer for banks moved back to the levels obtained using results from DFAST 2016 and 2017 after the significant rise observed using DFAST 2018 projections. As we noted in earlier posts, the gyrations in capital requirements for banks create excessive volatility and constrain bank ability to further support economic growth. A significant source of the volatility in capital requirements was in part driven by the different path of long-term rates under stress in the scenario.

To reduce such scenario-driven volatility, the supervisory scenarios should be subject to public notice and comment. The feedback the Fed would receive from public comments would reduce volatility in capital requirements and maintain the Fed’s flexibility to design scenarios that are appropriately countercyclical. It is also worth pointing out the Fed’s decision to release the projections of the various components of pre-provision net revenue under stress and the announcement that it would also release similar projections for previous years. This information will help improve our understanding of the sensitivity of the Fed’s PPNR projections to changes in the macroeconomic scenario.

[1] One important change in this year’s stress tests was the reduction in the number of participating banks from 35 to 18.

[2] In DFAST 2018, 6 IHCs were subject to an interim version of the global market shock. Also, four IHCs started participating for the first time in the stress tests in 2018, so changes in the SCB between 2017 and 2018/2019 are also a result of changes in the number of IHCs.