Basel III Endgame and the Cost of Credit for American Business

After the 2008-09 global financial crisis, the Basel Committee on Banking Supervision, the global standard setting body for bank regulation, agreed on a complete overhaul of bank capital standards. Those overhauled standards, known as “Basel III,” largely have been implemented worldwide, including in the U.S. and Europe. Generally speaking, these standards define minimum bank capital requirements – the amount of capital banks must hold to cover potential losses – for assets such as corporate loans and home mortgages. At the end of 2017, the Basel Committee (of which the U.S. and 27 other major jurisdictions, including the EU, are members) made substantial changes to Basel III, despite its successful track record, generally with the goal of bringing assessment of credit risk more under governmental control. Currently, regulators in the EU, U.S. and other countries are preparing to revise their regulations to implement the Basel III endgame agreement. The EU issued proposed revisions at the end of 2021, and the U.S. is expected to follow sometime this year.

Implementation of the Basel III endgame changes in the U.S. could overstate the credit risk of U.S. corporate and small business borrowers, resulting in higher capital requirements for U.S. banks that provide credit to these borrowers and higher borrowing costs for U.S. businesses, particularly relative to jurisdictions that permit the use of external ratings. As a result of legislation in effect in the U.S., banking regulators are not permitted to consider external credit ratings, thereby resulting in a U.S. capital framework that will be less risk sensitive than the frameworks in place in other jurisdictions. Higher loan costs will reduce credit availability for businesses in the U.S. and weaken economic growth. The effects will be felt broadly, first by the businesses seeking credit and secondarily by the communities they serve, including low- to moderate-income communities. As discussed in more detail below, the U.S. should utilize all of the opportunities the Basel framework offers to assign a risk weight to a corporate entity that accurately reflects its intrinsic credit risk. 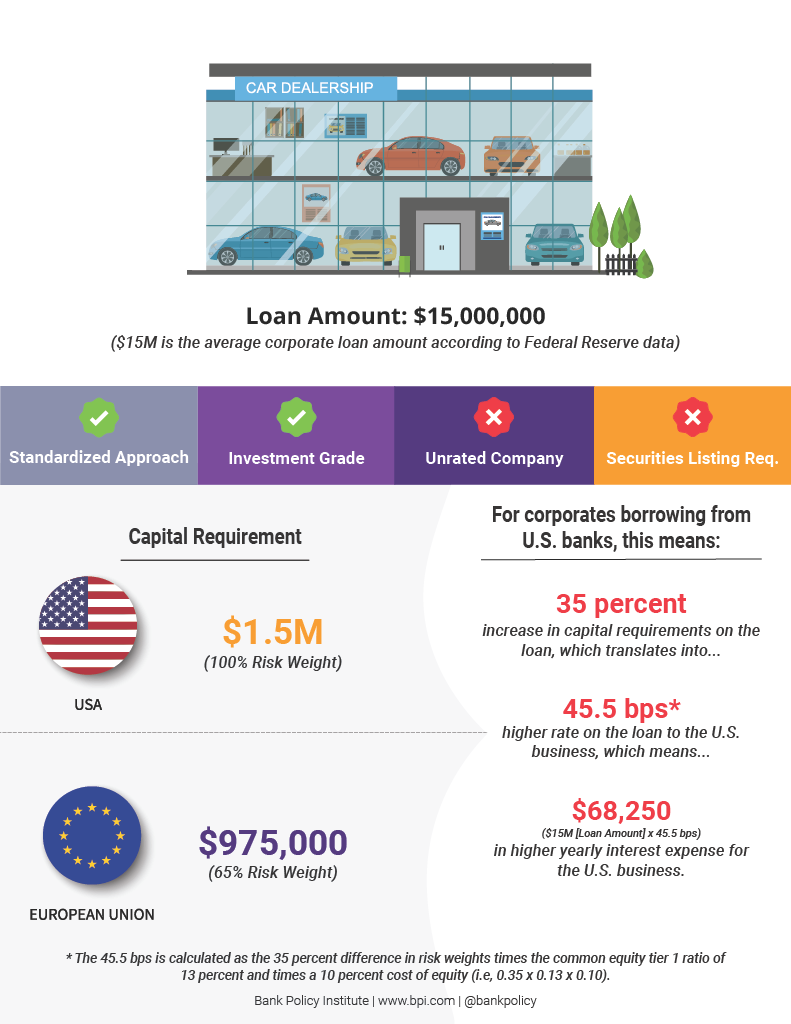 The EU has proposed to implement the Basel changes in a way that ensures that businesses will be assessed for their actual risk, and not be subjected to punitive, one-size-fits-all standardized charges that assume a worst-case scenario. Specifically, the EU proposal will:

The European approach eliminates all instances in which a 100% risk weight would be assigned to a firm whose actual risk justifies a lower risk weight. This appropriately lowers the cost of borrowing for these firms.

Given the multitude of factors in the Basel framework, there are countless possible outcomes for the ultimate implementation of Basel in the U.S.  With respect to credit risk, these outcomes lie on a spectrum from the most granular and reflective of each individual business’s risk to the least granular and most standardized—that is, a mostly one-sized fits all approach that would result in the same capital treatment for exposures to businesses with significantly different risk profiles.  Outcomes at the least risk-sensitive end of this spectrum would include the following elements: 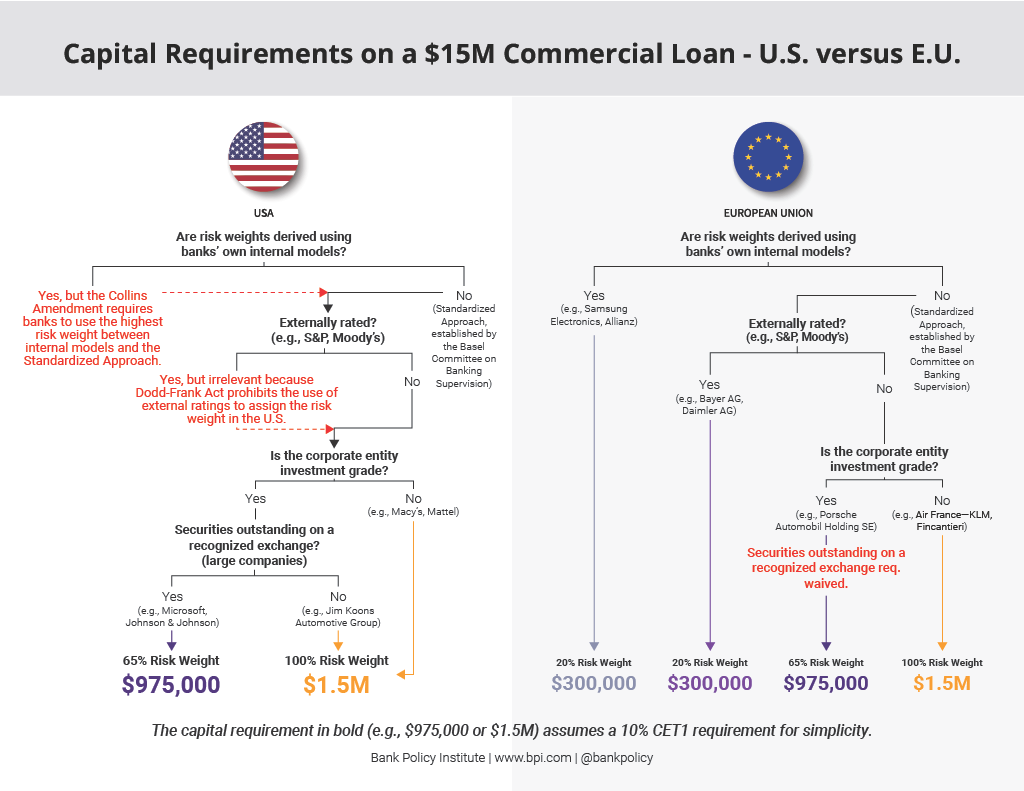 How Can the U.S. Avoid Self-inflicted Wounds?

If U.S. regulators wished to ensure that the price of credit for businesses better reflected their true risk, then an approach akin to the European one would be best. At a minimum, the U.S. could delay or eliminate the securities listing requirement so that creditworthy but smaller borrowers can avoid a punitive capital treatment. Although this would technically represent a deviation from the Basel III endgame standard, consider that (1) the EU is already planning a 10-year delay of the same requirement in its own rulebook, (2) the statutory prohibition on using external ratings already puts the U.S. at a major disadvantage under the Basel III endgame standards, and (3) the U.S. agencies already “gold-plate” so many other facets of the Basel standards (meaning they often impose requirements that are much higher than the standards articulated under Basel agreements). For example, the largest 33 banks in the U.S. are subject to a stress capital buffer, which is determined from the supervisory stress test results, and is about 1 percentage point higher than Basel’s capital conservation buffer of 2.5 percent on average.

If U.S. regulators interpret Basel III endgame in an extreme way, domestic banks will face capital requirements that outweigh those of their foreign rivals and overstate businesses’ actual default risk. Instead, U.S. regulators could adopt a version of Basel III endgame similar to the EU approach that recognizes the true creditworthiness of business loans that banks must hold capital on. This outcome would reduce the cost of credit for U.S. businesses of all sizes, including small businesses, and allow them to compete fairly with global peers.

For more on how American businesses could face more expensive access to credit, see our explainer video here.

Basel III Endgame and the Cost of Credit for American BusinessDownload