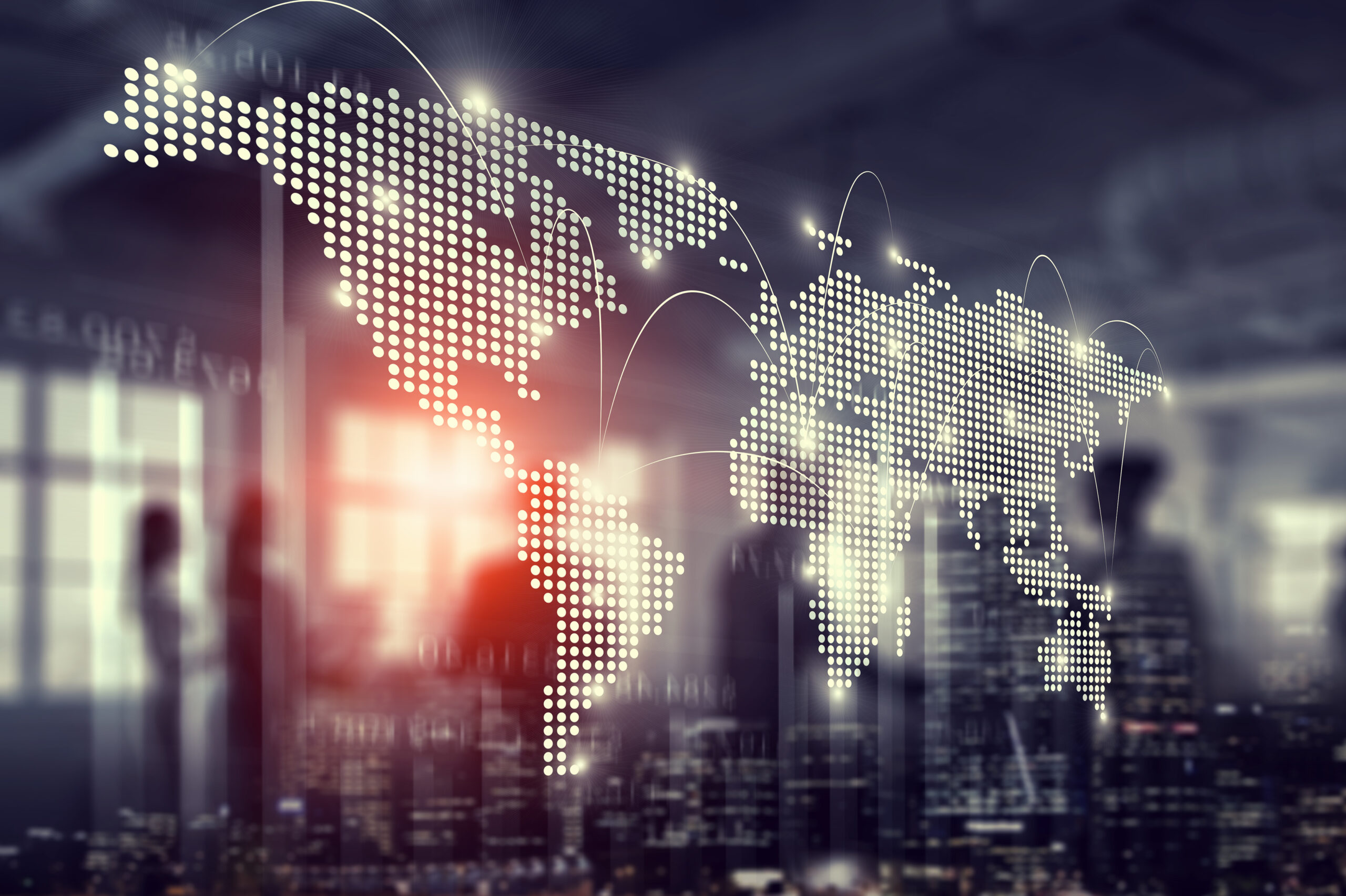 On February 11, the Federal Reserve released the global market shock (GMS) component of the 2020 severely adverse scenario after having released the macroeconomic scenarios last week. In this year’s stress tests, 11 of the 34 participating firms must incorporate an instantaneous shock to their trading exposures and losses associated with the default of their largest counterparty.

Banks with significant trading operations are subject to the GMS component in the stress tests. The GMS includes more than 35,000 large moves in market prices and rates generally calibrated to market moves from the second half of 2008. This year’s description of the scenario also indicated the calibration of shocks may include “multiple periods or hypothetical (but plausible) events based on salient risks.”[1] The Fed does not disclose precisely how the different sets of shocks included in the GMS are calibrated. This year’s description of the GMS includes slightly more information on the time horizons used by the Fed to calibrate the risk factor shocks. Specifically, the document states that the calibration of the shocks in more liquid markets—interest rates, foreign exchange, or public equities—is done using a shorter time horizon (such as 3 months). In contrast, shocks to assets classes traded in less liquid markets—private equities or non-agency securitized products—would be calibrated assuming a bank holds the asset for a longer period (such as 12 months). However, it offers no historical or empirical analysis to support a 1-year holding period, which appears ahistorical and counterfactual.

Banks are required to recognize the trading and counterparty mark-to-market losses from the GMS in the first quarter of the planning horizon of the stress tests. Because many banks subject to the GMS reach the trough in regulatory capital ratios well before the end of the planning horizon, the frontloading of stress losses via the GMS leads to a larger decline in regulatory capital under stress. This results in a higher required level of capital to pass the test than for loan losses, which are spread over the 9-quarter planning horizon.

The Federal Reserve indicated that the 2020 GMS would be especially stressful for bank holdings of collateralized loan obligations (CLOs) and private equity investments; therefore, we first analyze the moves in the market shocks to these two asset classes. Next, we report the shocks to a set of risk factors analyzed in a study published by SIFMA (2019).[2] Similar to the conclusions presented in that study, the probability of the shocks occurring simultaneously remains quite remote in this year’s GMS. However, the size of risk factor shocks traded in more liquid markets is less extreme compared with prior years. 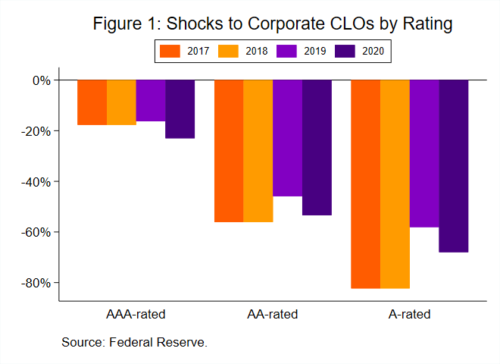 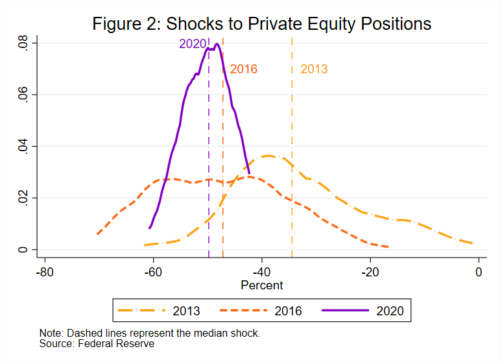 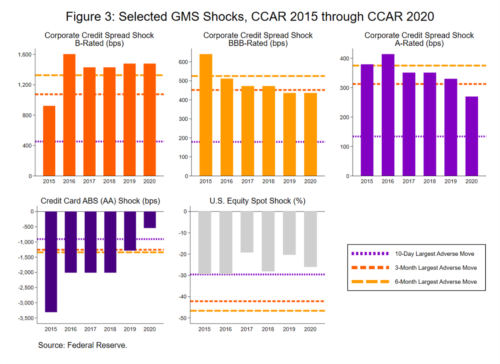 In the remainder of this note, we look at the set of shocks across various asset classes also included in the SIFMA (2019) paper. The SIFMA study concluded that most of the shocks analyzed had a very small probability of occurring and were even less plausible when assumed to occur instantaneously. Figure 3 displays the shocks to corporate bond spreads, credit card asset-backed securities (AA-rated), and the S&P 500 Index. The dashed purple/orange/yellow lines represent the largest historical adverse market moves over 10-day, 3-month, and 6-month horizons, respectively.[3] Except for the shock to the B-rated corporate bond spread, the remaining shocks shown in Figure 3 are within the most severe realization registered over a 6-month period. Moreover, the BBB- and A-rated corporate bond spreads do not exceed the largest historical adverse move observed over a 3-month period. Finally, the shocks to the S&P 500 and the credit card ABS are less severe than the largest historical 10-day adverse move, including a noticeable decrease in the severity of the shock to AA-rated credit card ABS. 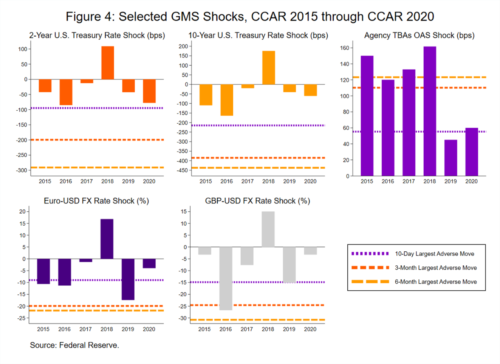 Figure 4 plots the shocks to Treasury rates, MBS spreads in the to-be-announced market, and EUR/USD and GBP/USD exchange rates. As shown by the purple dashed line, the 2020 shocks are very close to the 10-day largest adverse move in the price or spread of the underlying asset. This suggests that the calibration horizon of the GMS was more specific this year relative to prior years. For instance, shocks to assets traded in more liquid markets, such as the moves in the EUR/USD and GBP/USD factors, are now much less severe than the historical 10-day largest adverse in those currency pairs.

Banks are also required to use the GMS to estimate losses in the counterparty default scenario. This scenario assumes that the largest counterparty of each bank with substantial trading or custodial operations defaults unexpectedly in the first quarter of the planning horizon. However, the application of the GMS in the largest counterparty default (LCD) scenario leads to a substantial overstatement of risk. This is because the GMS horizon remains well in excess of the time required to close counterparty default exposures, even during periods of severe market dislocations. For example, the Basel III counterparty capital charges assume considerably shorter closeout periods, ranging from 5 to 10 days, unless there is a collateral dispute. Therefore, much more work needs to be done to make the LCD component more realistic.

This analysis finds that some of the market shocks are more severe than those included in previous years, such as the decline in the value of private equity investments and that of collateralized loan obligations. But the overall aggregate level of GMS losses for each bank will depend on each bank’s trading positions on the as-of date specified in the scenario, which makes it difficult to assess the severity of the GMS over time.