A Primer on Bank Capital

Capital is the amount by which a firm’s assets (the financial, physical, or intellectual assets it owns) exceed its liabilities (the amount it owes to creditors). Suppose a baker invests $600,000 into building a bakery financed with both $100,000 of her own money and a bank loan for $500,000. The bakery’s assets are worth $600,000, while its liabilities equal $500,000, leaving $100,000 in capital – the amount the baker invested. In fact, capital can also be defined as the amount that the firm’s owners have invested.

For banks also, capital is the difference between the assets of the bank—loans and securities—and the liabilities of the bank—deposits and other borrowings. Generally, the owners of a bank (like any corporation) are its shareholders. Shareholders share the profits of the bank in proportion to the shares owned and the total shares outstanding.

Note that capital is not an asset or a liability, it is the difference between the two. Often people talk about capital as if it were a pile of safe assets, but that’s a misunderstanding. If someone says a bank needs to “set aside” more capital, they mean the bank needs to fund itself more with capital and less with debt. 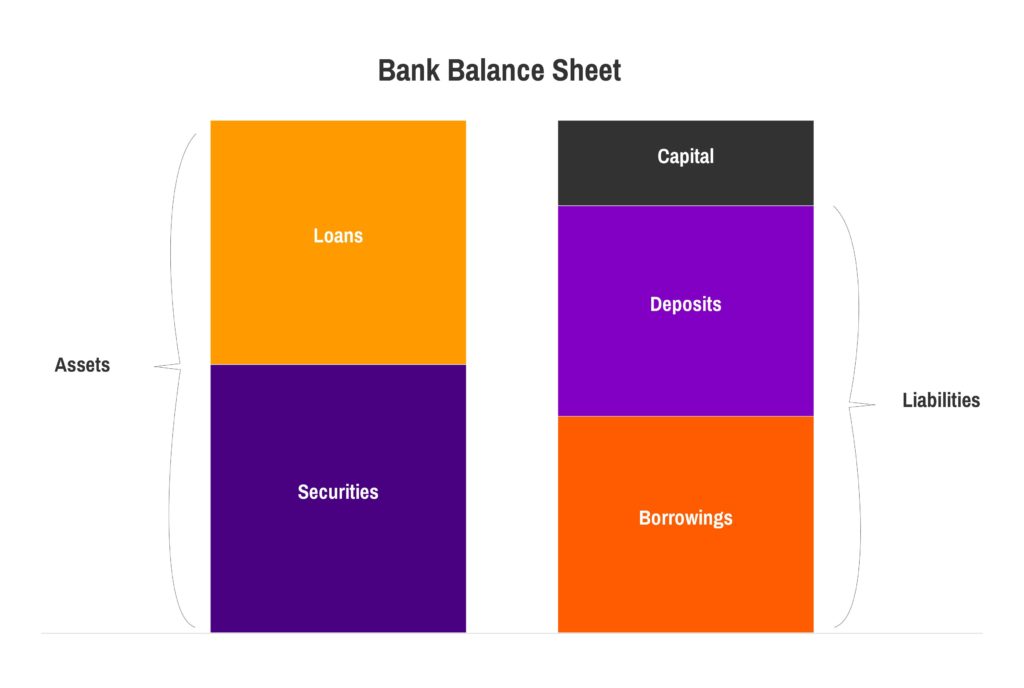 HOW IS BANK CAPITAL INCREASED OR DECREASED?

A bank can increase its capital in two ways: It can sell more shares, which boosts capital but also reduces the claim of each existing shareholder on future bank profits. And the bank can retain profits instead of paying them out to shareholders as dividends.

Similarly, a bank can reduce its capital in two ways: It can pay a dividend to its shareholders. And it can buy back shares.

Bank capital can also go up or down because the value of the bank’s assets and liabilities go up and down. For example, if a bank concludes a loan is going bad, it sets aside a reserve for the anticipated loss. That reserve reduces assets and also, therefore, capital.

WHY IS CAPITAL IMPORTANT?

SO WHY NOT MAKE BANKS FUND THEMSELVES ENTIRELY WITH CAPITAL?

While having a large amount of capital makes a bank safer, funding bank assets with capital (money raised by selling equity shares or retaining income) is more expensive than funding it with debt (money raised through borrowings including deposits). As a result, the more a bank funds itself with capital, the more it must charge for loans. In other words, the supply of bank credit for businesses and households falls.

SO HOW MUCH CAPITAL SHOULD BANKS BE REQUIRED TO HAVE?

Academic studies have estimated the setting for bank capital requirements that best trades off these costs and benefits. U.S. banks, in aggregate, have capital slightly above the optimal range estimated by many of the studies.

On the Overcapitalization for Market Risk Under the U.S. Regulatory Framework April 21, 2022
More Posts by This Author
Consumer Affairs