A Few Thoughts From Our Annual Conference 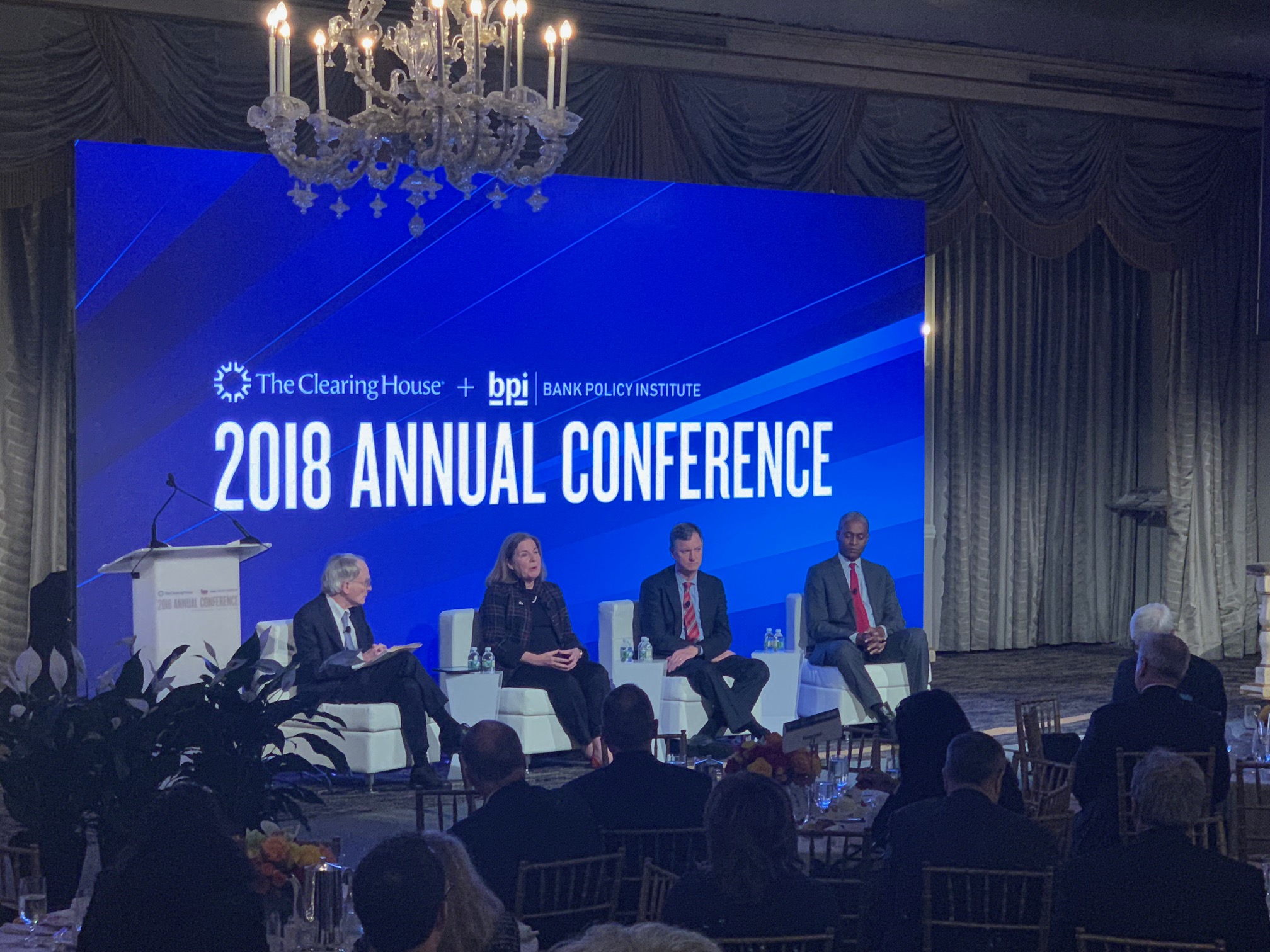 Last week, we co-hosted our annual conference in conjunction with our friends at the Clearing House.  We heard a variety of perspectives on numerous issues, and I’m grateful to all who contributed to a series of rigorous and principled debates.  I wanted to highlight two particular takeaways.

Banking and Economies of Scale

Each year, we begin with a panel of analysts, investors and dealmakers, as I think it’s important to escape our policy echo chamber and hear from those with an objective perspective on the banking industry. 1

This year’s panel was jarring.  A panel titled, “Outside Perspectives on the Banking Industry,” included leaders from Lazard Freres & Co., Warbur Pincus LLC, Keefe Buyette & Woods and Credit Suisse. All panelists agreed that U.S. banks were at 70-plus year highs for capital, and more liquid than they have ever been.  But while that might seem to argue for an industry that would remain stable for the foreseeable future, the outsiders’ universal prediction was for upheaval.  The cause was simple:  the rapid, accelerating pace of technological change in banking – everything from customer-facing apps to back office functions – is making scale more important than ever.  As a result, they predicted that the next few years would see both a significant number of mergers and organic growth by larger banks, as lower operating costs and network externalities provide a marked competitive advantage.

Of course, this phenomenon is occurring across all industries, and banking is somewhat behind.  There are not thousands of telecommunications companies, phone manufacturers, or oil and gas companies in this country.  A key reason is that governmental policy has pushed against consolidation in banking.  The most important force is the governmental guarantee of bank liabilities in the form of deposit insurance, which means that depositors generally don’t need to consider the risk of default. And, a 10 percent cap on any bank’s share of U.S. insured deposits effectively requires the very largest banks to grow organically rather than through acquisition.2  But historical restrictions on interstate branching and banking have been eliminated, and so too have some non-public, post-crisis restrictions on growth imposed by bank regulators through the examination process.

Thus, the panelists seemed to agree that we are on the cusp of a time when competition and the benefits of scale, particularly with respect to technology, will make it increasingly difficult to operate a bank with less than $1 billion in assets, and the regulatory and supervisory environment may allow regional banks to pursue opportunities to merge.  For example, they noted that because the Dodd-Frank Act imposed enhanced supervisory restrictions on banks over $50 billion, many banks have clustered just under that limit, and rejected growth or merger options that would have taken them over it.  Now that legislation has lifted that limit, natural competitive forces will be unleashed.

There are good reasons to believe that this trend will be beneficial for bank customers.  The analysts noted that banking is a more competitive business than ever before, so one would expect to see technological advances translating into better service and lower prices for retail and commercial customers.

I worry, though, that this message will be drowned out in Washington by a counterfactual counter-narrative:  that any merger will dangerously decrease competition, or that the actual cause of consolidation is an unfair (and unstated) competitive advantage that large banks have over community banks.  Neither of those factors was mentioned by our analysts, but in a politicized environment, with politically popular community banks endangered, the temptation for ignoring hard economic reality and seeking to punish the winners in a race for scale will be strong.

Both outside analysts and other conference participants were quite focused on potential systemic risks of leveraged lending, and the Federal Reserve highlighted those risks in its first semiannual Financial Stability Report, issued on the last day of the conference.  There clearly has been a significant increase in credit to fund leveraged businesses, as well as a narrowing of spreads and easing of terms.  The Federal Reserve has expressed concern about the potential impact on investors if they take higher-than-expected losses in the next economic downturn.

There is also a growing recognition that much of this risk is held outside the banking industry, and that this non-bank share has been increasing.  Several conference participants noted one reason this migration may have been counterproductive from the perspective of financial stability, which I had not heard discussed previously.  Banks have the experience and staffing expertise to work with borrowers who are experiencing trouble to help them recover, and they also hold the capital necessary to allow such a workout.  And leveraged loans represent a small percentage of loans held by banks – around 3 percent by one recent estimate – and this diversification further allows banks to remain patient.  Non-bank holders of this debt, on the other hand, generally have neither the experience nor expertise to engage in workouts. Thus, any downturn in this area is likely to see rapid defaults, and high loss rates.  Furthermore, to the extent that non-bank holders of this debt are short-term funded and/or poorly capitalized, this problem could become systemic.

1  You can find the participants here: https://www.tchbpiconference.com/program

2 Although not noted at the conference, an investment banker recently relayed that the $10 billion threshold for application of the Durbin price-fixing for interchange fees discourages any merger that takes a bank over that limit.

Putting “Too Big to Fail” to Rest: Evidence from Market Behavior in the COVID-19 Pandemic September 9, 2020
More Posts by This Author
Bank Capital and Stress Testing