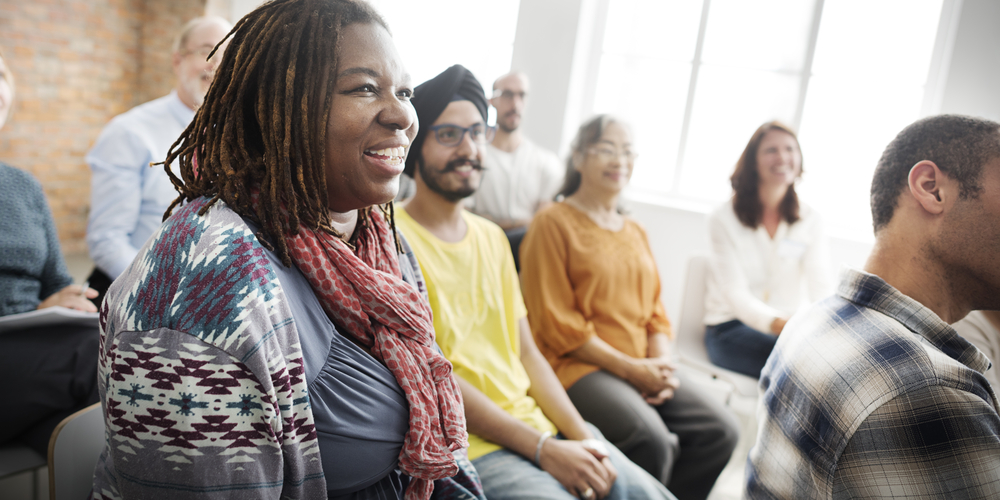 Even as Congress debates new laws to provide equity investments and other forms of robust support to  Community Development Financial Institutions (CDFIs), the Federal Reserve could use its existing, non-emergency, lending authority to provide funding right now for those CDFIs that are depository institutions.[1]  Specifically, the Fed could create a new, permanent, discount window credit program — modeled on the seasonal credit program — narrowly designed to fund and subsidize lending to low- and moderate-income (LMI) areas and households.

CDFIs, which are certified by the Treasury Department, are credit institutions that have a primary mission of serving low-income individuals and communities and with least 60 percent of their lending going into LMI communities.  There are currently over 1,100 CDFIs, of which half are depository institutions (commercial banks, thrifts, and credit unions).  According to the FDIC, half of the banks that are CDFIs are also Minority Depository Institutions.[2]  As noted by then-Chair of the Federal Reserve Board Ben Bernanke in 2009,

These organizations have loaned and invested billions of dollars in our nation’s most distressed communities and have attracted many conventional investors into underserved areas. For small businesses in particular, CDFIs provide critical funding because many traditional creditors view such loans as too risky or, sometimes, too small to be profitable…Through their work at the community level, CDFIs, together with other community development organizations, can help build a sustainable recovery for all of us.[3]

Of course, in addition to training, small business owners need financing. But, as many of you know, factors such as lack of a credit history or a poor credit history and limited collateral–for example, home equity–make it difficult for the owners of small enterprises to access traditional business credit. This situation is true for many minority, women, and low-income borrowers. Nontraditional lenders, including more than 1,000 Community Development Financial Institutions around the country, help fill the gap.[4]

Just as the seasonal credit program is intended to support community bank lending to farmers, the Fed could create a new program – the Community Credit Program – intended to support bank lending to LMI borrowers or loans in LMI communities.  The Community Credit Program would be a regular and permanent discount window lending program.  It would be authorized under Section 10B of the Federal Reserve Act, the same authority used to authorize the seasonal credit program as well as ordinary discount window loans (primary credit loans).  Section 10B authorizes the Fed to make collateralized loans to depository institutions.  The Community Credit Program would not be a temporary emergency program such as those the Fed has recently opened to respond to the economic and financial fallout from the coronavirus, which are authorized under Section 13(3).  The terms of the proposed program are summarized in Table 1.

Under the program, Federal Reserve Banks would lend community credit to the half of certified CDFIs that are depository institutions (the other half are venture capital funds and loan funds).  Section 10B only authorizes the Fed to make loans to depository institutions (DIs)).  While the Fed could, with the Treasury’s permission, create an emergency facility under section 13(3) to lend to the non-DI CDFIs, the program could only be temporary.

The amount the Fed would lend to each CDFI-depository institution would be limited to the DI’s lending to LMI individuals and communities.  Specifically, the maximum amount of community credit a CDFI-depository institution could have outstanding would be capped at the sum of home mortgages to LMI borrowers or in LMI communities, small business loans in LMI communities, consumer loans originated through “small dollar” programs to LMI borrowers or in LMI communities, and CRA-eligible community development loans and investments.  The eligible DI’s borrowing limit would be established each quarter based on the DI’s regulatory and financial reports.

Community credit loans would have maximum maturities of 3 months, but, as is currently true for primary credit loans, would be repayable and renewable on request.  Consequently, as long as the DI remained eligible, it would be able to rely on Fed financing for its lending to LMI individuals and communities.  Loans extended under Section 10B cannot have maturities longer than 4 months unless they are entirely collateralized by home mortgages.[7]

Such a program would be extremely safe.  The loans would be collateralized by the same assets that collateralize seasonal credit and other discount window loans.  The Federal Reserve accepts essentially all loans and securities on banks’ books as collateral and then applies large haircuts to ensure the Fed is well protected.  To be clear, the collateral would not be limited to the LMI loans used to establish the participating DI’s borrowing limit.  The Federal Reserve has never lost a dime on a seasonal credit loan.

The program would also be inexpensive.  In fiscal the year 2017, CDFI’s provided $5 billion in financing (according to CDFI Fund).  Since half of CDFIs are depository institutions, one could guess that in a typical year maximum typical demand for the community credit program would be $2.5 billion.  CBO would likely score the program as costing the amount of the subsidy:  $2.5 billion times 50 basis points, or $12.5 million per year.

In Ben Bernanke’s remarks quoted above, he also discussed the funding challenges for CDFIs in the middle of a severe economic downturn.  His remarks are equally applicable today:

As CDFIs move past the immediate hurdles, however, careful consideration will need to be given to more systemic changes to correct weaknesses that have emerged in the current CDFI model. Notably, the reduction of funding by key participants highlights the importance of broadening and diversifying the industry’s funding base.

In addition to identifying the problem, the Federal Reserve could be part of the solution.   The community credit program would be a reliable and ongoing source of funding that CDFI-depository institutions could use to support their mission of community development. 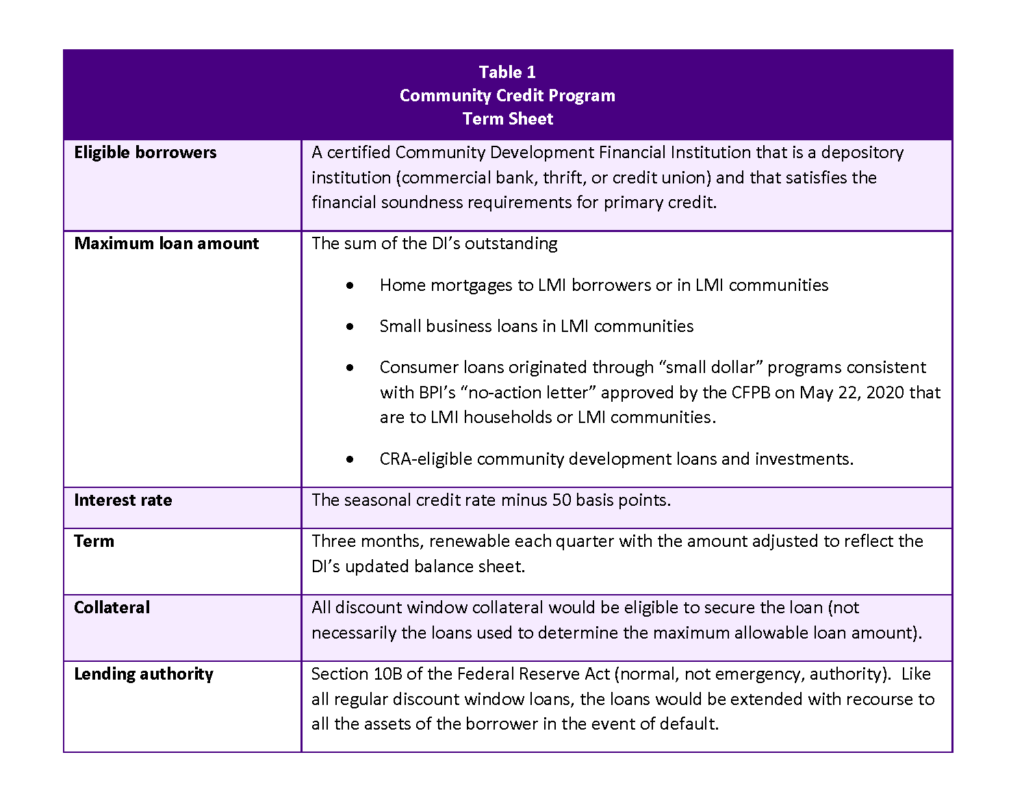 [1] I’d like to thank Paul Calem, Fabrice Coles, and Pat Parkinson for their comments and suggestions.

[2] Minority Depository Institutions are “… FDIC-supervised banks that meet either of the following two definitions: (1) federally insured depository institutions in which 51 percent or more of the voting stock is owned by minority individuals; or (2) federally insured depository institutions in which the majority of the board of directors is minority and the community the institution serves is predominantly minority.” https://www.fdic.gov/consumers/community/mortgagelending/guide/part-1-docs/cdfi-overview.pdf

[6] The ECB is currently providing loans to banks at -50 basis points in order to encourage economic growth.  See https://www.ecb.europa.eu/press/pr/date/2020/html/ecb.pr200312_1~39db50b717.en.html.  There is nothing stopping the seasonal credit rate from going negative now.

[7] The maturities of loans extended under the Fed’s emergency authority — Section 13(3) — are unrestricted, but, as noted above, programs established under 13(3) are temporary. 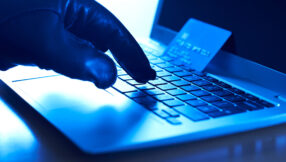 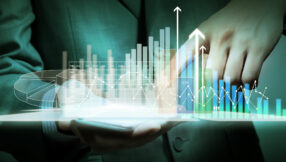 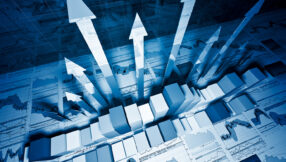 Supervisory Stress Tests for Loan Losses: A Five-Year Overview With Reflections on the Need for Greater Transparency July 28, 2020
More Posts by This Author
FinTech & Innovation

The Fact that Big Banks’ Stock Prices Got Hammered This Spring Hardly Proves They are TBTF February 11, 2021